A memento from the time Vancouver transformed into a winter wonderland for a weekend, courtesy of Dimitri Alexander.
Feb 20, 2021 10:07 PM By: Megan Lalonde 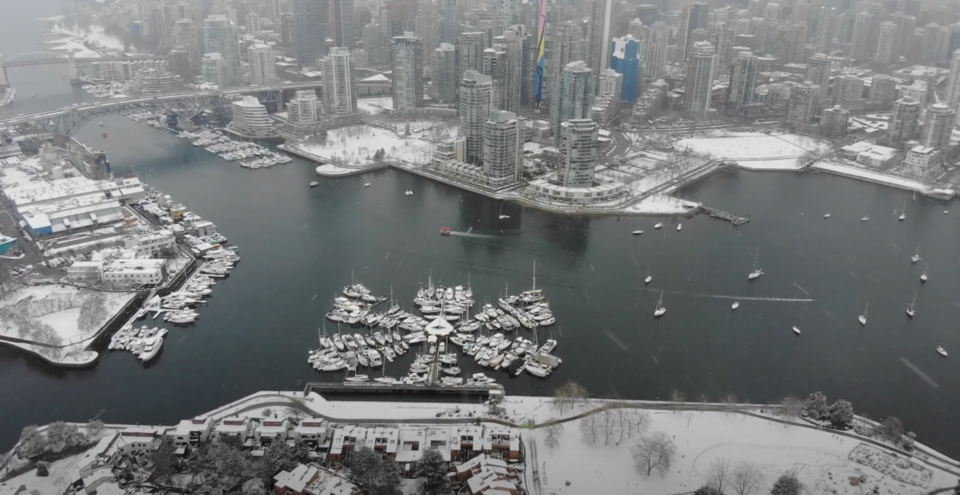 Snow doesn't fall over Downtown Vancouver very often, so when it does, it's worth documenting.

The city's first major snow storm of the year just so happened to coincide with both Valentine's Day and Family Day last weekend, meaning, of course, that it was no exception. While some Vancouverites took to Instagram with their most scenic landscape shots and others busted out their best snowman-making skills, one local braved the blustery conditions and took to the sky.

Or, more accurately, sent his camera into the sky.

Vancouver-based drone operator Dimitri Alexander uploaded a video to YouTube this week that takes viewers on a bird's-eye tour of downtown, through the strong winds and softly-falling snow. It captures snowy rooftops, boats cutting through the calm waters of False Creek, and even includes a unique fly-under shot of the iconic glass-bottomed pool in the Arc condo building near Cambie Street bridge.

Now that the city's been restored to its typical shades of green, blue and grey, the end result is a soothing, 4K-resolution memento of a time when Vancouver, if only for a weekend, transformed into a white-blanketed winter wonderland.

If you're feeling nostalgic, Alexander's YouTube account also features other videos showcasing the city from above, including one filmed while Vancouver was engulfed by a thick haze of wildfire smoke last year, and another during a summertime English Bay sunset. Press play on his video from last weekend below, and check out the others here!

Vancouver woman part of team trying to row across the Atlantic for charity (VIDEO)
Mar 1, 2021 3:32 PM