Documentary 'Returning' searches for culture in the Salish Sea

The film records a sailing trip around the Salish Sea to visit artists and professionals who make a living and live in the region that is also home to a beautiful but threatened eco-system.
0
Jan 11, 2019 11:15 AM By: Diane Strandberg

Are we ready for a new version of nature, one that makes the great outdoors a centre of our lives rather than a place we go when we have time on weekends and holidays?

That question and more will be discussed next Friday when the documentary film Returning — by award-winning cinematographer Mike McKinlay and SFU biologist Rob Butler — is screened at Inlet Theatre in Port Moody. 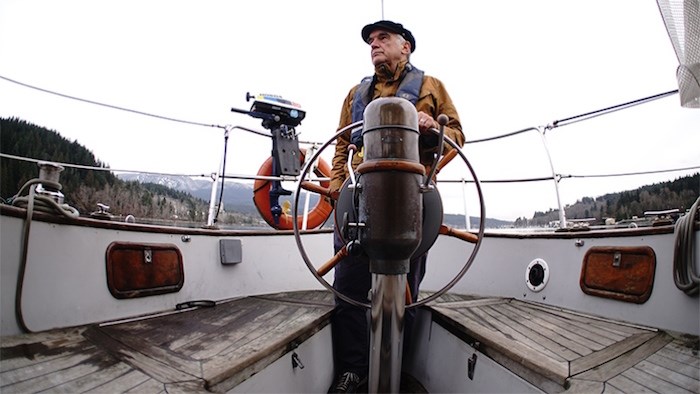 Rob Butler captains a boat on a journey around the Salish Sea to visit artists and professionals for the documentary Returning, which will be shown at the Inlet Theatre in Port Moody Jan. 18. Photo by Mike McKinlay

The film records a sailing trip around the Salish Sea — the watershed surrounding the Strait of Georgia and Puget Sound — as the men visit artists and professionals who make a living and live in the region that is also home to a beautiful but threatened eco-system.

“What we’re doing is looking for people who were inspired by nature and might be the genesis of a cultural renaissance where nature becomes a cultural focus,” said Butler, a member of the Burke Mountain Naturalists who established the Pacific Wildlife Foundation at Port Moody’s Reed Point Marina. "The First Nations people have shown a rich culture can develop with nature."

From Mitlenatch Island, north of Powell River, to the Strait of Juan de Fuca, Butler travelled by boat, visiting inhabitants in remote places to get an understanding of why they lived there and if a similar ethos could be transported to places elsewhere in B.C. — even the suburbs, where nature can sometimes seem far away.

Butler’s experiences produced many ideas about how nature could be incorporated into our lifestyles. He suggests, for example, the development of a Salish Sea diet, like the Mediterranean diet, which achieved heritage status and is known for its health properties.

“We need to start valuing what we have here,” said Butler, who hosts his own First Feast, with guests coming to New Year’s dinner preparing foods from local ingredients.

He would like to see a west coast culture develop with reverence for nature that includes music, performances, painting, architecture, food and more.

“How do you green up a place so it’s better for you? It could be done with urban planning, putting schools near green space. We could take the Starbucks model: Everyone should live within five to 10 minutes of a green space.”

Ultimately, people who care more about nature will do more to protect it. Butler said he hopes a cultural renaissance would lead to more efforts to conserve the Salish Sea ecosystem while the health benefits would reduce diseases often linked to a sedentary way of life.

Butler, who often speaks on the topic for various agencies, said he said he hopes the film Returning, will be an inspiration for people to do more about incorporating nature into their lives and to find a way to develop a distinctive nature-based culture and philosophy could be within reach for everyone on B.C.’s west coast.

The Jan. 18 screening includes a Q&A session and a silent auction, with proceeds going to the Pacific Wildlife Foundation.

This virtual around-the-world pickleball rally makes a stop in Metro Vancouver (VIDEO)
May 30, 2020 10:27 AM