While the sun is shining and temperatures are now rising, the magic of Vancouver's snow-filled days will live on through images and video.
Mar 20, 2019 5:17 PM By: Elisia Seeber 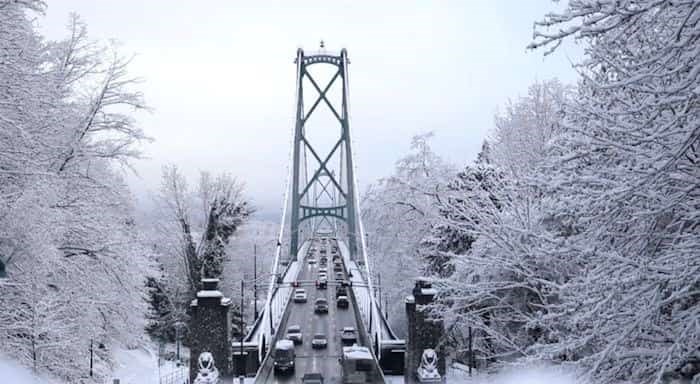 The magic of February’s snow filled days will live on through images and video. Photograph By BEN GLASSCO

While the sun is shining and temperatures are now rising, the magic of Vancouver's snow-filled days will live on through images and video.

When the flurries begin, it’s hard not to whip out your phone and take a few snaps. Travel and adventure photographer Ben Glassco was one of the many people who couldn’t resist capturing the beauty of February’s cold snap.

In a short one-minute and seven-second clip, Glassco showcases the city’s “fleeting moment as a winter wonderland.”

It was Feb. 13, and the city had just received a decent dusting of snow.

“I was busy that day but I just had to get out and capture that rare moment in the year for Vancouver, when we actually get snow that sticks,” Glassco told the Courier.

“It was very beautiful. Like all things in life, you have this brief window and you can capture it and then you can hold it with you for the rest of your life, and that’s pretty cool.”

Glassco spent that morning out and about filming some of his favourite hangout spots in Vancouver’s West End – describing the finished product as a video that showed “his life draped in snow.”

For Glassco, who grew up on a farm in Ontario, the snow is always welcome.

“Winter is my preferred season for Vancouver,” he said.

“The mountains and the fir forests are always shrouded in these mystical fogs and clouds.

“Vancouver has its own natural winter beauty but on the rare occasion it gets that heavy snowfall, I can’t help myself.”

If you're missing the snow, Glassco's video may help you relive and hold on to those dreamy days.