Melissa Auf der Maur has plenty of experience negotiating with crazy. After all, the Montreal-native served time in two of the most important (and volatile) rock acts of the 1990s: Hole and Smashing Pumpkins.
0
Sep 23, 2010 11:11 AM By: Andrea Warner 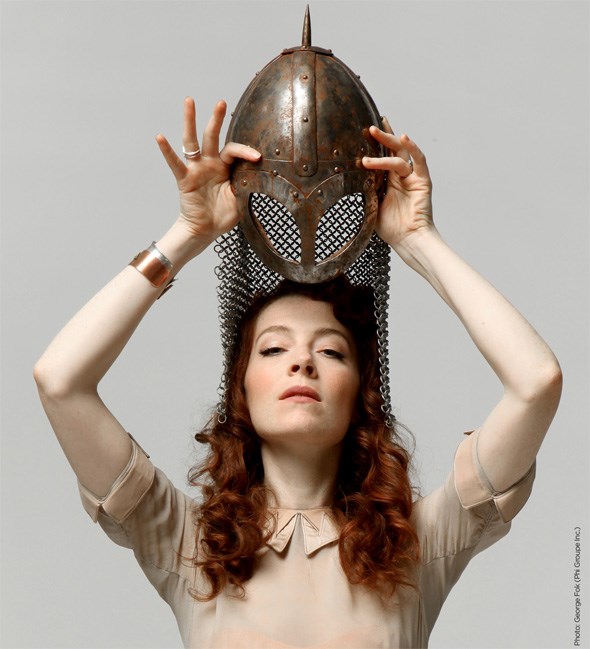 The movie’s very beautiful. The images are vivid and lush.

Thank you. Nature speaks for itself and when you’re in southern Vermont in its amazing autumn season, that’s just the way it looks. Tony Stone, the director I worked with with DIY Viking maniacs, they can make a lot of the magic.

Where did the original inspiration for whole project come from?

Basically when I started writing my follow up to my first record - well, when I got off tour from my first album, it was the perfect end to a decade chapter. So, my Pumpkins and my first solo record all happened in exactly 10 years. I’ve always worked in 10-year cycles, don’t know why, but in my mind I’ve always seen it in these big, epic chunks, so when I started writing this new record, I felt like I had arrived at this next chapter and it was time for me to expand and return to my visual and conceptual art roots that I’d abandoned the day I joined Hole. I left my Fine Arts degree at Concordia and my majoring in photography, I really left it behind and became full-time music for 10 solid years, and there was always the sense that I’d left a part of myself behind. So, on a very personal and artistic level, it was a commitment to myself to bring my roots as a visual artist to my almost-fully grown musical life... Meanwhile, there was an incredible evolution in technology happening, so making an HD film, by the time we shot Out of Out Minds, it was the first consumer-friendly, portable HD camera on the market, and by the time I was looking to release the project, you know the very same technology that had dismantled the music industry was giving me hope that I could also be an independent record company. In terms of the personal, creative concept, I wanted to make a project that reflected more of my inspirations, whether it’s fantasy or time travel or Vikings or mythology or certain eras of music and painting.

In terms of what you said about technology and the change its perpetrating, OOOMs seems not only hugely ambitious but smart on a business level since you’ve got all of these offshoot project coming out of one concept.

Right. And believe me, I’m not a business brain. (Laughs) That was the last thing on my mind, although, what I am is a creative survivalist. I’m going to make art for the rest of my life and that’s that. I did want to start pushing the boundaries and expand and grow as an artist. I feel like that’s very important for any person who’s going to devote their life to art and change... When I started writing and conceiving this multi-layered project I was still with Capitol Records and I played them the demo of Out of Our Minds the song and told them there was going to be a movie and a comic book as well, and that was in 2007, they did not like that idea. They looked at me like, ‘I don’t understand. Is this an album?’ Now every record executive would love to hear there’s a fantasy film and comic book attached. But, at the time it didn’t seem like a smart business move, just a creative one, but at the end all these things were happening parallel to me. In many ways I started realizing that the technology was working in the artist’s favour and that technology had begun to dismantle the rigid man and establishment but completely organically nurture and support the artists. So, that’s been a very beautiful thing to watch in the 21st century in my opinion.

Is this the first movie you’ve been involved in?

Yeah, and it really is an extension of where I left off with my photography in my late teens, early 20s. This is definitely my most active part of a film.

Having written it, you really can decide to put yourself in any situation you want. Was it weird for you to be starring in it and being the focus like that?

No, ‘cause it felt the same as making a song, or envisioning a collaboration with a drummer or an engineer. It felt like the same part of me, so it felt completely natural. The only thing that felt completely new was the way we made this film, which was basically immersing ourselves in nature and living more or less in the woods on and off for two months and living off the grid. I don’t know if you know, but it’s all shot on solar power and we really lived like those witches and Vikings and loggers. It was really life-changing to me on a human-meets-nature level, as well as just learning a new language... the language of cinema the way I know the language of writing a new song or recording. It was fascinating and new to me the way you build a story or a scene with the mechanics of filmmaking. In many ways, it’s testing out new areas of creation to gain perspective on music. All of this, getting a fresh perspective so I could return to this base. Honestly, it proved to me that music is still my number one love. (Laughs). What it takes to set up a car crash or a fireball is really complicated compared to recording a bass track!

Auf der Mer brings her OOOMs tour to the Pacific Cinematheque on Tuesday, Sept. 28 at 7pm. And, as a bonus, she’ll also be performing an acoustic set in-store at Fluevog’s Gastown centre earlier that day at 3pm.

Here's what happens when you try to play ice hockey on slushy Trout Lake
Jan 16, 2020 10:11 AM
Comments
We welcome your feedback and encourage you to share your thoughts on this story. We ask that you be respectful of others and their points of view, refrain from personal attacks and stay on topic. To learn about our commenting policies and how we moderate, please read our Community Guidelines.