Prior to their Hollyburn gig, Essers and Jardine had been performing songs on Jardine’s patio a few times a week for the passersby during the nightly 7 p.m. salute for health-care workers and other essential staff.
May 24, 2020 10:03 AM By: Ben Bengtson 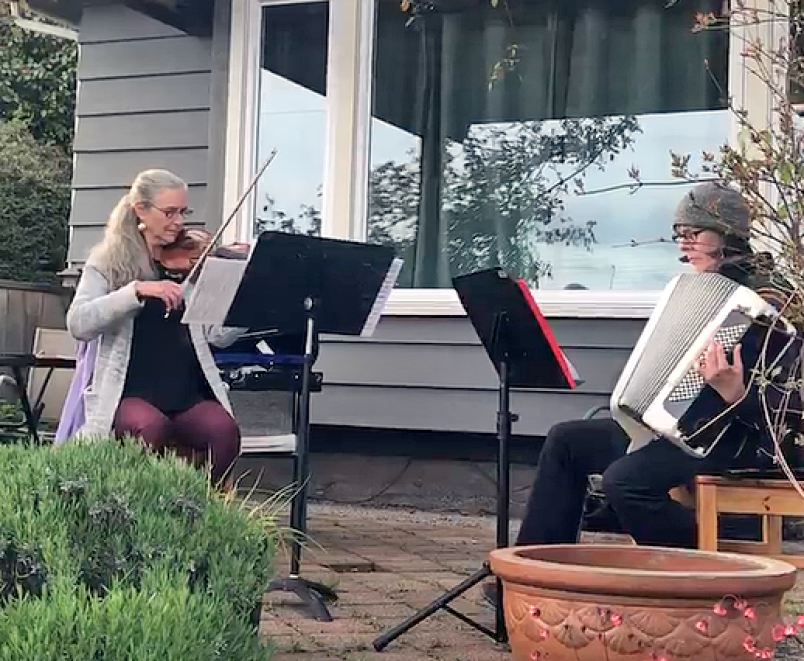 Musicians Jenny Essers and Jane Jardine perform in Dundarave. The duo have also performed for the residents of Hollyburn House. Photo supplied by Jenn Essers

McCartney may have sang of “all the lonely people,” but it’s a duo of musicians in West Vancouver who are making sure those forced into quarantine right now are a little less alone.

Jenny Essers, a violinist with the Vancouver Symphony Orchestra, and Jane Jardine, an accordion player and member of the Vancouver Squeezebox Circle, recently performed for the residents of Hollyburn House.

Side by the side in one of the long-term care home’s outdoor courtyards, the duo performed a sampling of pop hits, including the Beatles’ classic “Eleanor Rigby,” with a lush orchestral flare three weeks ago.

Other tunes included “Mr. Sandman,” “La Vie En Rose,” and a sampling of music from The Sound of Music, according to Essers, who has been a VSO member for 45 years and has since been part of the orchestra’s roster of musicians looking for innovative, often virtual ways to perform following the shuttering of concert halls due to the ongoing COVID-19 pandemic.

“As a classical musician, I’ve played many times at seniors homes and I knew that there’d be a social director, so I called up Hollyburn House,” said Essers.

Prior to their Hollyburn gig, Essers and Jardine had been performing songs on Jardine’s patio a few times a week for the passersby during the nightly 7 p.m. salute for health-care workers and other essential staff.

Their spirits lifted following those performances, they decided to bring their music to people shut in and quarantining at a local long-term care home.

As they started playing recently, residents of Hollyburn House came out to their decks to watch the music unfold from the courtyard below.

They plan to perform for the residents of Hollyburn House again this week, hopefully with a small film crew capturing the performance as part of VSO’s virtual programming during the health crisis, added Essers.

A sampling of the orchestra’s virtual performances can be found on its YouTube page, youtube.com/user/VancouverSymphony.