Words and photo: Daniel Curtis You've seen (and love) the comedy, Superbad , right? Pineapple Express ? How about The Green Hornet , Funny People and Knocked Up ? They all star one of Vancouver's funniest exports, Seth Rogen, and what they also have
Feb 24, 2012 11:47 AM By: V.I.A.

You've seen (and love) the comedy, Superbad, right? Pineapple Express? How about The Green Hornet, Funny People and Knocked Up? They all star one of Vancouver's funniest exports, Seth Rogen, and what they also have in common is that they were co-written by another awesome Vancouverite: screenwriter, Evan Goldberg. A graduate of Point Grey Secondary who went on to become a staff writer of Da Ali G Show and lived out his dream of writing an episode of The Simpsons, his new movie Goon pushes hockey comedy and violence to the limits. It opens nationwide today (at Scotiabank Theatre and Silvercity Metropolis locally) and we were lucky to sit down with Evan to talk about his hometown, his career, his favourite local watering hole and more. Enjoy Vancouver's Most Awesome: Evan Goldberg! 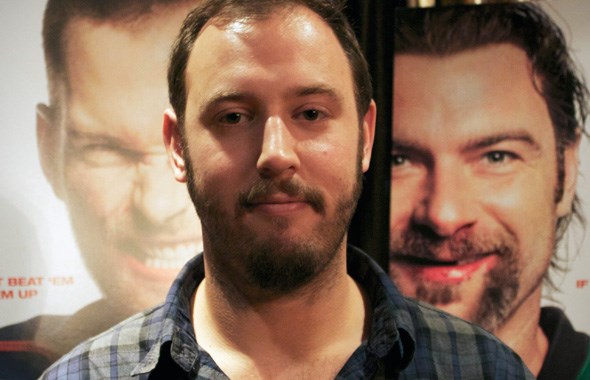 I'm pretty crazy about Vancouver. I live in L.A. right now but I just want to live in Vancouver all the time. The rain. I think that the rain makes it awesome, because it makes everything clean, green which makes the air nice. I love the rain, the people are cool. The abundance of coffee shops. It's clean, safe and fun. Most places aren't all of those things. Most places are clean and safe but boring, or really fun but kind of dangerous. Vancouver just feels balanced to me. I come back here all the time, as much as I can.

I have the best answer ever: my mother. She'll like that.

What’s your current favourite restaurant to visit when you’re in town?

I always go to Shabusen no matter what, every time I go home for all you can eat sushi. Shabusen is really awesome, Sun Sui Wah is really rad for dim sum. I recently tried Maenam, a new Thai restaurant and that blew my mind, but Shabusen... best deal ever.

What’s your favourite neighbourhood in the city?

My neighbourhood, 49th and Granville.

How did you research for Goon, and how was it collaborating with Jay Baruchel?

I didn't have to do any research at all because Jay has more information about hockey in his mind than anyone in the world. He was an infinite source of everything necessary. I like hockey but I'm not like a hockey fanatic, but Jay is the craziest hockey nut on earth. Really I just made sure the story worked, the structure was appropriate, the emotions flowed and everything wrapped up properly. Jay put in all the hockey. The layman who's not a hockey nut might not get this or that. So back and forth we slowly figured it out. Jay was the only research we needed.

Did you grow up playing hockey?

No, that's kind of the reason I did this whole thing. My mom would not drive me to hockey, because it was too early early and she didn't want her baby boy getting smashed against the boards. Which is ironic because it resulted in me playing rugby. My last year at McGill, I was like "This is f**king ridiculous. I have to learn how to ice skate, I have to learn how to play hockey. I'm Canadian and this is humiliating.". So my buddy took me out and taught me how to skate and puck handle.

Is the Canadian sense of humour different?

The Canadian sense of humour is definitely a little different. If you brought in a European they'd be "Ahhh you're all North Americans.". In Canada it's a combo of American and British sensibility. The slower, more sarcastic British style, darker comedy plays better in Canada than the U.S..

What's your favourite hockey fight or goon moment off all time?

I've got to say, the footage of the real life Doug [Smith]. I didn't see it until after we were done. To actually see him fight was just crazy. He was a dude who clearly had a knack for this. He said "I can do this, I'm good at this and this is what I'm going to do.". We definitely based it on him.

Are you a big Canucks fan?

I'm not a huge hockey nut, but I like the Sedins. I decided I want to get in on it, because I live in America and have a ton of Canadians who work with me. They all like hockey and if I like hockey more I could go and join them when they go to the bar. The best way to get in is to join a fantasy hockey league, which I'll be doing next year. I guess gambling is how you really get into something. Until I played hockey in my last year of university, I didn't get how great it was. Once I started to fiddle around and learned how to skate and stuff. It's just an exciting sport.

What is your view on the current hockey situation after all the issues of last year?

I totally thought you were going to say abortion [laughs]. In the grand sense of things I have no comment because I don't really follow hockey that much. From what I've gathered it's an element of the sport. People shouldn't be hitting each other so hard that they cause permanent damage. It shouldn't be happening, and be a free for all of madness. Within the confines of hockey sometime people go too far.

What were some of the things you and Seth (Rogen) did to have fun in Vancouver growing up? How did Vancouver fit into your writing?

A lot of it fit into Pineapple Express. A lot of stealing liquor from our parents. My brother and I made little shitmixes. My parents started marking them, and that's when we realized we just had to steal the whole bottle. We'd go down to the beach, hang out and go to the Angus Lands and play frisbee. Nothing crazy. Pogs when I was younger.

My mother likes to say it's going to the Children's Festival, [whispers] but I have no recollection of it at all. I recently told her that, and it broke her heart. She took me to every kids concert, Raffi and all that. I would say though, going on hikes with my dad throughout the Endowment Lands.

If you were in Vancouver and I handed you 100 bucks, where would you spend it?