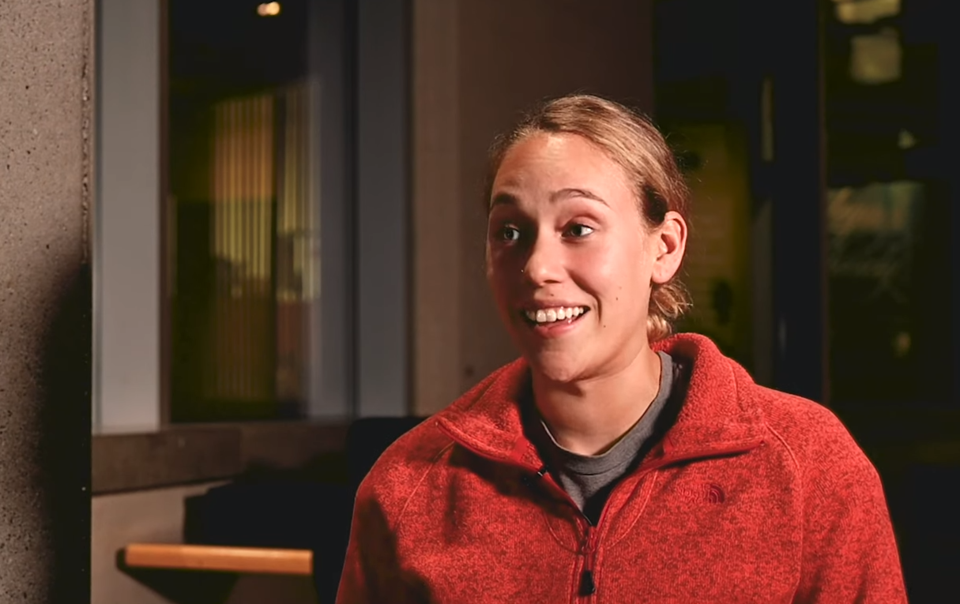 One of the people interviewed was communications student Kailee Duncan. (via Paolo Bigit/YouTube)

A mini-documentary made by a pair of Thompson Rivers University (TRU) students is looking at racism in a nuanced manner.

Communications students Paolo Bigit and Morgan Hunter decided to turn a school project into a short video on what racism looks like at TRU. During the 21-minute clip, they talk to a number of people at the school, including international students, a professor and a First Nations student.

Bigit says the project doesn't aim to blame individuals or organizations; instead, the goal is to start a conversation about the issues on campus.

"I don't want to talk bad about my university because I really like it and like it here," Bigit adds.

An international student himself, Bigit came to Canada and TRU in 2018 from El Salvador.

"We were told Canada has no racism and, 'Everyone will love you,'" he tells KamloopsMatters.

Bigit admits he has felt uncomfortable in some situations, feeling like people were judging him based on the colour of his skin.

"I was told by students on my orientation (to) be careful of First Nations; I wasn't sure who (First Nations people) even were," he says. "I've been learning more about First Nations by myself."

"It happened at a party; it was not at TRU, it was outside," he adds. "I feel like that was a very shocking moment for me."

Bigit later met a First Nations person, he says, who broke down those prejudices.

He notes that in the documentary, one of the people they interviewed was Kailee Duncan, who looks Caucasian in some ways, but is from a First Nation in B.C.'s north. She was also told to watch out for First Nations people.

Bigit says while racism isn't a big issue at TRU, he hopes to pre-empt it from growing into a bigger issue by starting this discussion. He also thinks there are ways the university and people involved in the university's culture could work to better integrate different groups of people.

"I've met more Canadians at my workplace than at the university," he points out. "I, personally, would love to see that gap between domestic and international students flow together."

Bigit also suggests more could be down to encourage non-First Nations people to attend events centred on First Nations culture.

The project was originally intended to be a five-minute video, but Bigit and Hunter thought it was supposed to be 20. Now that it's done, Bigit is interested in taking it a step further and making it a feature-length film about all of Kamloops.

"I'd like to expand it longer and talk to people in Kamloops, talk to First Nations in Kamloops," he says. "And hear different opinions."

Follow this adorable orphaned sea otter pup's rehabilitation journey via an online 'Joey-cam' (VIDEO)
Jul 17, 2020 7:36 PM
Comments
We welcome your feedback and encourage you to share your thoughts. We ask that you be respectful of others and their points of view, refrain from personal attacks and stay on topic. To learn about our commenting policies and how we moderate, please read our Community Guidelines.