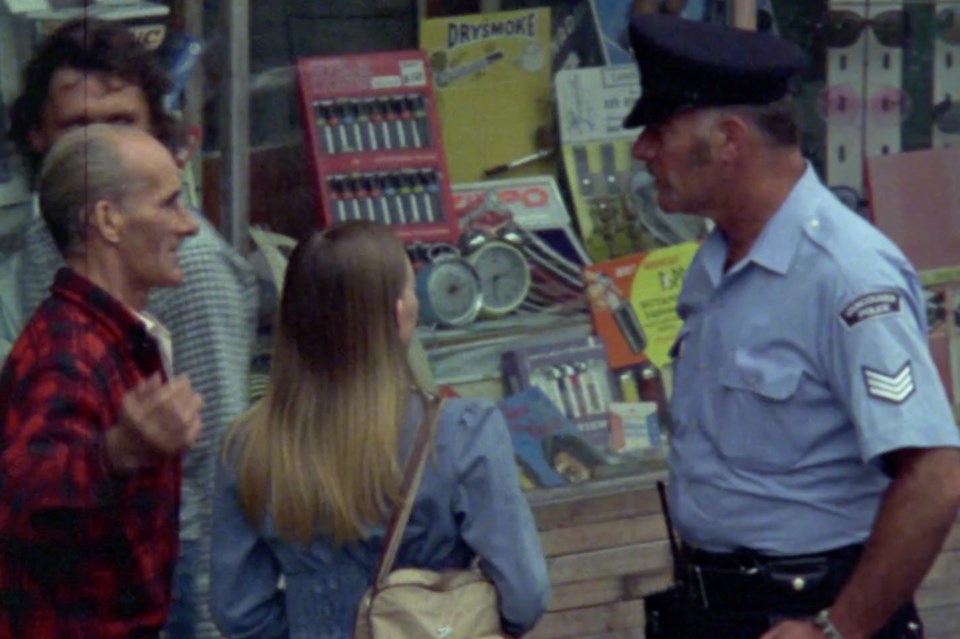 Vancouver's Police Chief, Adam Plamer, tweeted out an archival photo today of a legend on the force: Sergeant Bernie Smith, or "Whistling Smith" as he became known.

Because he liked to whistle.

In 1975 the National Film Board released a 27-minute documentary about Smith and his work in the Downtown Eastside of Vancouver.

Appropriately entitled "Whistling Smith", the doc takes you into a different time for our city, and the way that the media - and the police - treated the issues in the long-troubled neighbourhood.

A narrator describes Smith's "territory" of the 100 block of East Hastings as including "Canada's largest population of rubby-dubs, drug addicts, muggers and prostitutes. They are joined periodically by some 35,000 loggers and seamen who come down from the mountains and in from the sea to partake in the great abundance of sin."

He patrols it on foot, and at one point is seen chiding someone who he calls a "beggar."

Smith notes that "By unorthodox methods, I force them [people on the street] to move. To take their business somewhere else." Apparently when he was on his beat the crime rate would be cut "in half".

One of the scourges of the day was vanilla extract, a cheap alternative to spirits which people would drink until they were blackout drunk.

In the film the whistling sergeant is shown hauling off "rubby-dubs" (extract drinkers), giving hell to a young man for sniffing glue openly on the street, and confiscating needles from a heroin user.

Speaking with a man in a cafe he tells him that if he ever pointed a gun at him he would take it off of him and "shove it right up [his] ass."

While talking in a back alley with a woman who admits to being a prostitute, he tells her that "It's my job to put whores out of business."

His approach was to "make it really difficult to be a drug addict, a prostitute or a criminal", as his view was that was the way to prevent crime.

From a simpler time with a simpler (much more offensive, less empathetic, and perhaps not entirely effective) policing approach, "Whistling Smith" can be viewed in its entirety below.