This new series had its genesis when I began photographing Vancouver area location shoots last summer to get over a long post-Olympics funk.
Susan Gittins Feb 24, 2011 11:33 AM

I had no idea what I was unleashing when I tweeted the location for horror flick Dibbuk Box’s first day of filming in Vancouver on January 31st. But then, I had no idea that its easy-going star Jeffrey Dean Morgan was a magnet for the kind of female fans who would steal his discarded cigarette butts on location (funny and true).

The Seattle native became a fan favourite when he played three beloved and now dead TV characters almost simultaneously: Izzy’s dying Denny on Grey’s Anatomy; dead-after-sporadic-appearances John Winchester, father of Dean and Sam in Supernatural; and Nancy’s dead husband on Weeds. Dean Morgan went on to star in several films including the Vancouver-shot and Zack-Snyder-directed adaption of the iconic graphic novel Watchmen but he didn’t leave his Vancouver TV sons behind. When in town he still socializes with Supernatural’s Jensen Ackles and Jared Padalecki, telling me happily after Dibbuk Box wrapped its first day of shooting that he’d just talked to “Jensen” on the phone and made plans to “see my boys”. 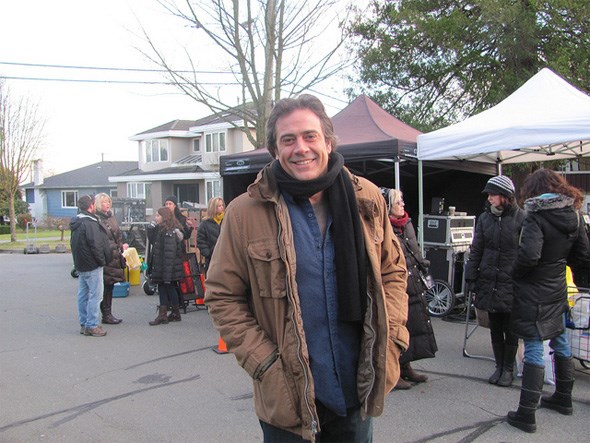 Sam Raimi`s Ghost House Pictures developed Dibbuk Box, a "based on true events" story of the terrible, inexplicable things happening to people who buy this haunted European antique on eBay. On the first day of shooting, I managed to photograph the pivotal scene where the young girl played by Natasha Calis runs to the car with the box she purchased at the yard sale, filmed at a corner ranch house near Lanagara College. She will refuse to give it up and so force her divorced parents – Jeffrey Dean Morgan and Kyra Sedgewick (the Emmy-winning star of The Closer) – to work past their hostility over the next 29 days to save their youngest daughter from the malicious, ancient spirit which inhabits it. 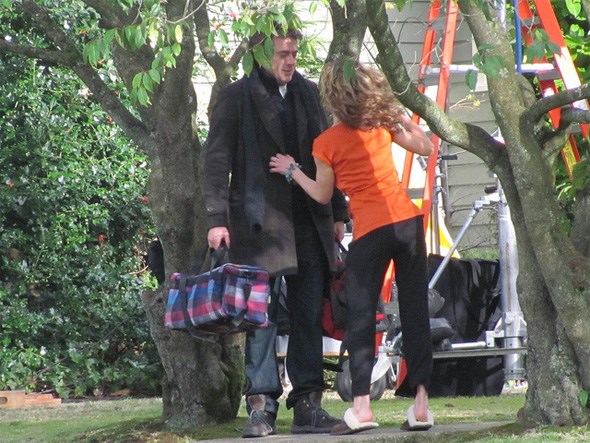 When I next found Dibbuk Box a week later on location at a corner arts-and-crafts house in Kerrisdale, I witnessed plenty of hostility to get through. While their daughters wait in the car, Kyra Sedgewick chases after Jeffrey Dean Morgan (carrying suitcases) in her slippers to hector him with a list of instructions on how to care for them, such as no pizza and vegan diets. Her new boyfriend played by Grant Show (best known for Melrose Place and his porn-star mustache on cancelled-too-soon 70s series Swingtown) scraps with Dean Morgan on the lawn on the second day of filming at this house. And on the third day there, Dibbuk Box set up wind machines for a special effects scene with the young girl and her wooden box bent on devouring her. This mishmash of scenes makes sense if you know that Dibbuk Box is filming all of its location shoots in the first month of filming in Vancouver and will spend its last month in studio.

Other memorable Dibbuk location shoots in February are said to have included one with rats in the youngest daughter`s classroom, the transformation of an empty downtown building into a Jewish temple with extras dressed as Hassidic Jews hanging out on West Hastings between scenes and a stint out at Riverview Hospital. 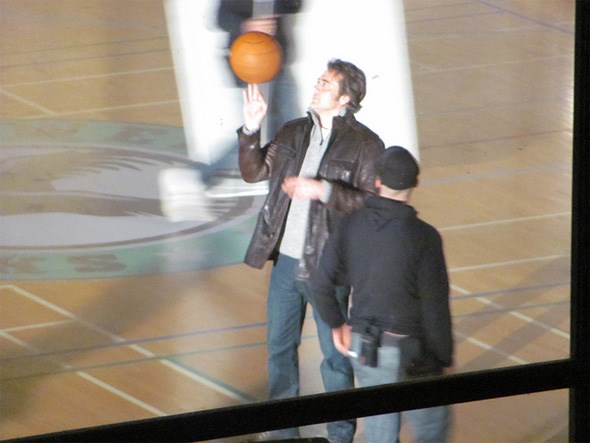 I caught up with Dibbuk Box again last week at a night shoot in Simon Fraser University's Central Gymnasium , where I'd once been a gym rat and varsity athlete. Jeffrey Dean Morgan's Dibbuk Box character is a college basketball coach, a perfect fit for this high school and university basketball star, who'd expected to make a career in the sport until a knee injury shattered that dream. From two levels up, I could see Dibbuk Box filming a tracking shot of Dean Morgan on the dimly-lit basketball courts. Between scenes and setups, he shot hoops, played keepaway with a female crew member and displayed an impressive range of basketball skills like spinning the ball on one finger.

The next big scene called for Dean Morgan to hug a young black basketball player. In rehearsal Dean Morgan shocked his co-star with a leg-wrapping squeeze around the actor's waist, cracking everyone up and shattering any pre-filming jitters. I've yet to see any actor have more fun on set: dancing, laughing and hugging crew. At one point I heard his baritone voice outside on a smoke break and for a brief irrational moment felt tempted to run down the stairs and snatch the cigarette butt to see whether it would fetch more than a real Dibbuk Box on eBay.

Dibbuk Box is expected to be in theatres this Halloween.