In the fourth year of this series, expect me to interview filmmakers and photograph film and TV productions -- Fifty Shades of Grey, Age of Adaline, Once Upon a Time, Arrow, Supernatural, Bates Motel a nd our own Continuum and Motive -- which showcas
Susan Gittins May 23, 2014 6:07 PM

How can Vancouver filmmaker A. J. Bond and actor David Amito still be friends after withstanding days of psychological torture at the hands of the other? Stress Position is no Kenny vs Spenny (a comic Canadian series where two friends competed against each other with the loser performing a humiliating act). Even though there are rules -- 1. No severe pain. 2. No permanent physical damage. 3. Nothing illegal -- I was shocked at how bad it got. It's not clear how much of their suffering is performance art in their stylized white “torture chamber”, with a steel mesh sculpture as the centre piece, but their reactions to sleeplessness, waterboarding, being forced to defecate on oneself and intimate psychological torture seemed real and true. Stress Position is showing at the VanCity Theatre tonight at 10:15 p.m. with A. J. Bond and cinematographer Amy Belling in attendance. With three more screenings on May 28, May 30 and June 6.

This weekend's other dark and twisted Vancouver offering, Cruel & Unusual, has its share of psychological torture but is nowhere near as raw. A teacher (David Raymond-Peck) married to one of his former English-language students finds himself in an AA-style purgatory filmed in Coquitlam's Riverview Hospital: forced to attend meetings and make declarations of his guilt alongside other presumed killers (Michael Eklund, Richard Harmon & Michelle Harrison) while re-living the death of his wife Maylon (Bernadette Saquibal) for eternity. Is he responsible? At the beginning of the film, our schlub doesn't know what's happening to him and neither do we -- what is the significance of the Langley tree? -- but the film comes to satisfying conclusion with elements of One Flew Over the Cuckoo's Nest along the way. Cruel & Unusual is showing at the VanCity Theatre tomorrow night at 10:15 p.m. With three other screenings on May 28, May 31 and June 7. 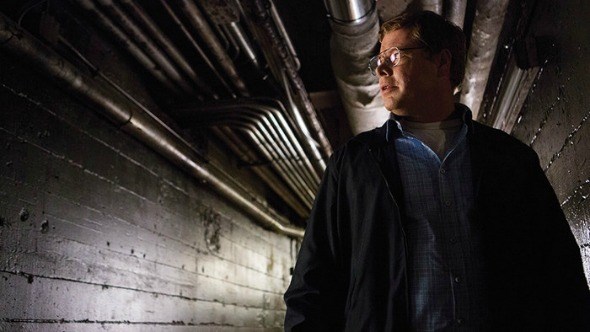 From Vancouver writer-director Merlin Dervisevic, this debut feature is nominated for four Leo Awards next weekend, including Best Supporting Performance for Michelle Harrison.