This new series had its genesis when I began photographing Vancouver area location shoots last summer to get over a long post-Olympics funk.
Jan 27, 2011 4:17 PM By: Susan Gittins

I am known for getting more excited at the prospect of seeing film or TV location stunts than celebrity actors, although occasionally a celebrity actor will do his or her own stunts and that’s fun to watch. 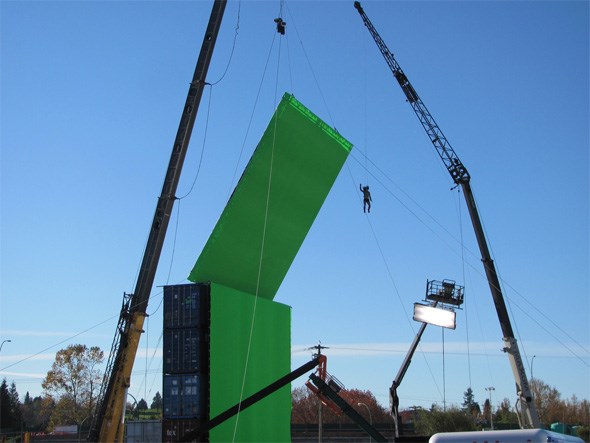 It’s usually the big-budget movies which stage the most spectacular stunt falls and jumps. For example, the supernatural-horror film Final Destination 5 (FD5)’s opening scene is of people cheating death when one gets a premonition of the collapse of Vancouver’s iconic Lions Gate Bridge, which takes the vehicles and people on it with it. To create the scene, FD5 closed the actual bridge for filming from 2 a.m. to mid-morning one weekend. And crew built two Lions Gate bridge sets: the one on a mountain side in Lions Bay big enough for cars and buses to drive on and the one near East 1st Avenue and Boundary Road just a bridge segment placed on top of three shipping containers.  I missed seeing people and a car falling off the bridge segment but captured this stunt woman falling off the much higher greenscreen Lions Gate Bridge at that set in early November 2010.

A few weeks before, rom-com/action hybrid This Means War (TMW) closed the area behind the Burrard Skytrain Station at night to film some spectacular parachute jumps. On the first night, David Clem Major based jumped with a black parachute off the roof of the Bentall 4 tower onto a closed-off Dunsmuir below dressed as Shanghai.  Several local photographers captured his feat from the Cactus Club Cafe at Bentall 5. The following night, Clem Major and his black parachute were dropped several times from a multi-story crane to land on Dunsmuir. And TMW crew told me Clem Major even did a dead drop (no parachute) off Bentall 4 in the middle of the night when there was less risk of spectators stumbling onto the site.

I anticipated even bigger stunts from Mission Impossible: Ghost Protocal this winter but so far all the Vancouver towers have been quiet. Celebrity actor Tom Cruise did do his own running stunt very quickly at the Vancouver-Convention -Centre-as-Bangalore-India shoot but no huge stunt falls or jumps from him yet. 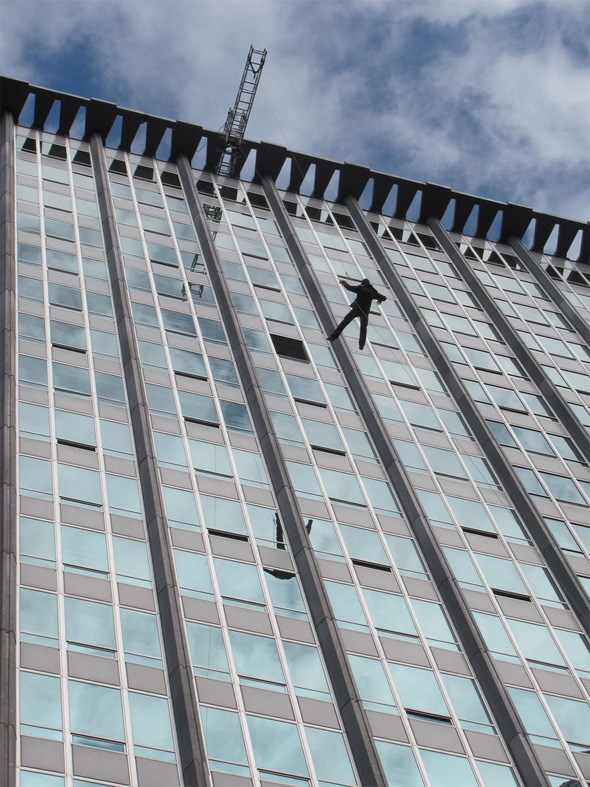 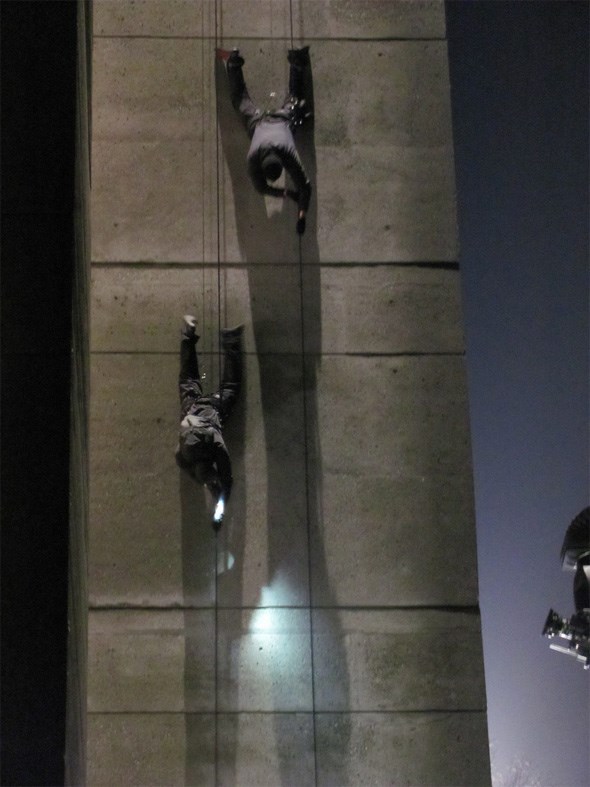 Luckily, sci-fi TV series Fringe acts like a big-budget movie when it comes to stunts. Last September, a large crowd of spectators thrilled at the sight of stunt man Jon Kralt falling  backwards out of a sixteenth floor window in the Electra Building.  And last weekend, Fringe filmed two stunt men crawling on all fours down the Buchanan Tower at the University of British Columbia, braving bitter cold and high winds for take after take. One of the stunt coordinators termed it a decelerated fall.

As the weather improves in the coming months, I hope to see and learn more about the stunt side of the Vancouver film and TV biz.

What are you thankful for during the pandemic? Messages of appreciation spotted in Vancouver (VIDEO)
May 12, 2021 11:46 AM