This series had its genesis when I began photographing Vancouver area location shoots last summer to get over a long post-Olympics funk.
Jun 14, 2011 3:38 PM By: Susan Gittins

Wild is the word I'd use to describe Saturday's red carpet at the Leo Awards celebrating the best of BC-produced film and television: from one nominee going in and out of his character to another striking poses with his elastic face to another threatening to drop his pants to the entire cast of all-Canadian series Sanctuary making funny faces for the cameras. And immortal Sanctuary star Amanda Tapping owned all 100 metres of that carpet in her floor-length black dress and five-inch heels.

Since television built the town of Hollywood North it should be no surprise that Amanda Tapping is its Queen after more than a decade on the Stargate series and then co-creating Sanctuary with writer Damian Kindler and director Martin Wood, two other Stargate almuni who I photographed below watching Tapping walk towards them. Sanctuary came into the Leos with a whopping 17 nominations and the privilege of sauntering the red carpet in prime time (the last half-hour of the two-hour West Georgia Street spectacle). 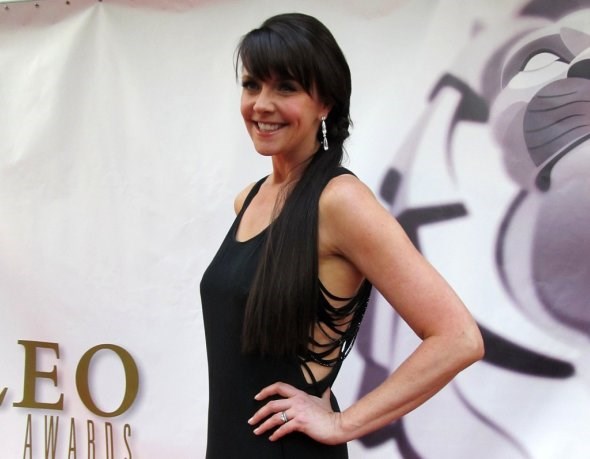 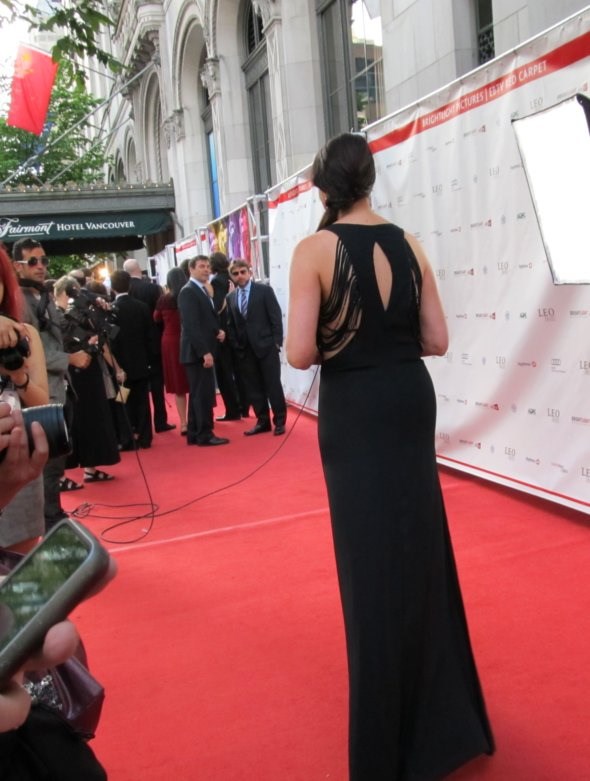 The almost-block-long red carpet started at the corner of Burrard and West Georgia with Leo red carpet host and actress Gretal Montogmery, who happens to be the significant other of presenter Chad Willett. Having one of their own interview them on camera inspired Sanctuary's Robin Dunne to unbuckle his belt and threaten to drop his pants (captured and later tweeted in a Twitpic by his co-star Robert Lawrenson). Autograph hounds and fans managed to nab the local celebs on their way to the next stop where I stood with Rebecca Bollwitt, aka @Miss604, next to what passed for official photographers and reporters at the gala. Beyond us stood Shaw's Johanna Ward from The Express (a Leo nominee herself) in a gorgeous red crimson backless gown and behind us a random mix of photographers, hounds and people getting off at the bus stop in front of the hotel. Fun and so not Hollywood.

Still I was disappointed not to see Callum Keith Rennie, who later won the Leo for his multiple-personality detective on cancelled Vancouver series Shattered, or Erin Karpluk, the nominated star of urban Toronto drama Being Erica. And I felt a big gap where Stargate Universe people had been after the show opted not to make submissions to the Leos following its abrupt before-Christmas cancellation. Fortunately, actors submit separately so Best Supporting Actress nominee Jennifer Spence (photographed below with her husband and fellow nominee Ben Ratner) represented the much-missed SGU, last year's winner for Best Drama series. 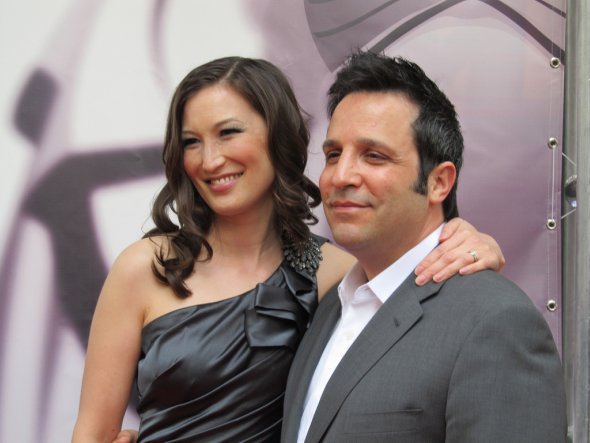 For once though, film had a big budget $10-million nominee called Gunless to compete for attention against all the big budget American and Canadian TV series produced in BC. Later  the Osoyoos-filmed movie won the big award for Best Feature and other prizes for its cinematography, stunt coordination and production design. Roughly halfway through the two-hour red carpet, its nominated best supporting actor Dustin Milligan took his turn to strut. He autographed dozens of way-back photos of himself on Beverly Hills 90210 and then showed off his Jim-Carrey-like rubber face mugging for the cameras and mock posing. I'd heard that Milligan and his pal Cory Monteith of Glee are rabid Canucks fans based in LA so I asked him if he'd seen Friday's game. Sadly no he answered, as he'd flown up to Vancouver that night for the Leos. 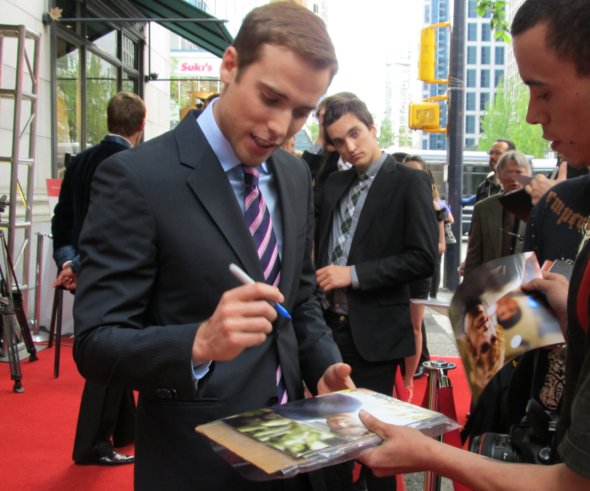 Tyler Labine  another film nominee , who later won Best Actor for playing a backwoods unsophisticate in comic-horror feature Tucker & Dale vs Evil, didn't disappoint either: after noticing a marked resemblance  between himself and the lion he introduced us to his cousin Leo. 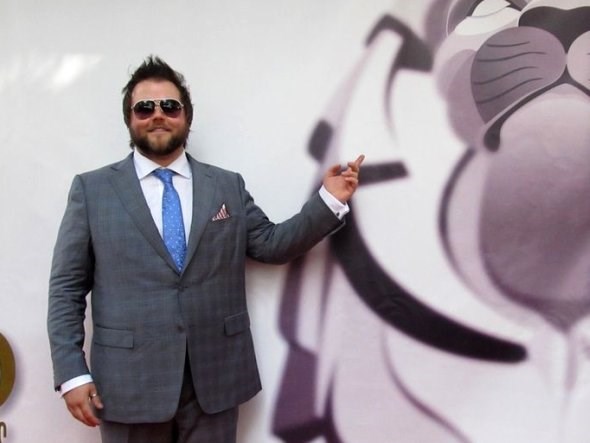 But the red carpet belonged to television. I met so many nominees and presenters I recognized and few that I didn't: like Vancouver actor Carmen Moore of Albert-filmed Blackstone, who showed off this locally-designed native-inspired dress below. She later took home Best Lead Female in a series, trumping previous winners Erin Karpluk and Amanda Tapping, as well as her own nominated co-star. 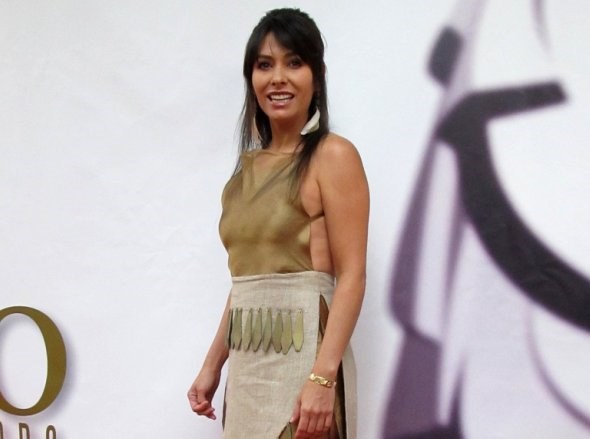 Personally, I couldn't wait to see local acting chameleon Michael Eklund, who played a rock star at the Bayshore Hotel on Endgame looking for a polar bear he'd bought and an idiot-turned-savant on a great episode of Friday night hit Fringe . He thrilled us on the red carpet by going in and out of his Fringe character Milo for which he picked up a Leo as expected (I should have put money on that one). 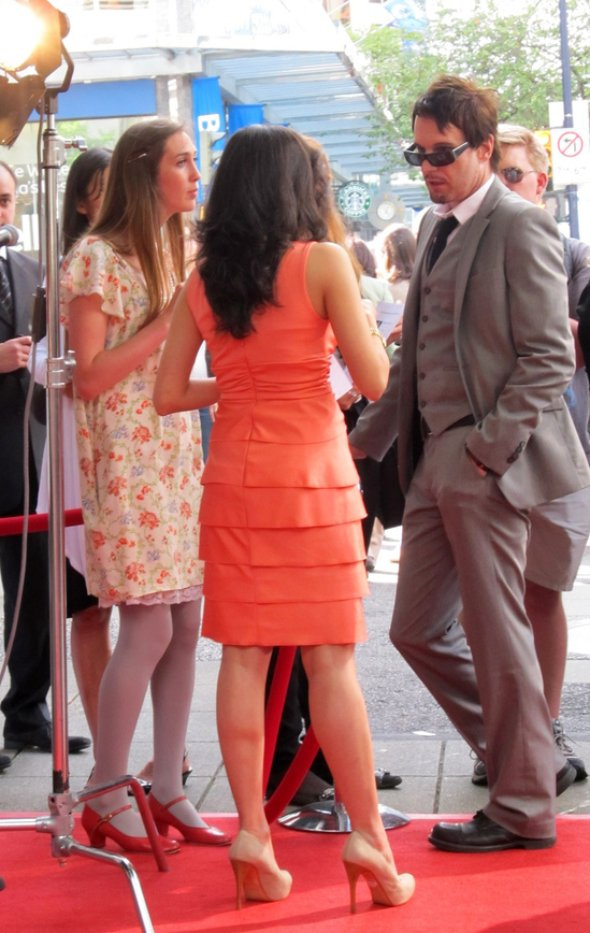 Paul McGillion, who later won a Leo for his role in short drama A Fine Young Man, signed autographs and posed for photos with Stargate Atlantis fans on his way in. And presenter David Richmond-Peck proved recognizeable from a recent episode of Endgame and a crazy-guy stint on sci-fi series V. But I embarrassed myself outright with Richard Harman, known as Rosie Larsen's smarmy rich ex-boyfriend and an early suspect in The Killing. "I wish I had killed her," Harman joked after winning his own Leo for children's series The Haunting Hour, telling me that he and Rosie actresss Kate Findlay, now filming in Indonesia, had become good friends. Brandon Jay McLaren's hair (see below) made it much easier to recognize Rosie's teacher and mid-season suspect. And news of a second-season renewal for The Killing means we can look forward to a whole new set of Vancouver actor suspects on the rain-soaked series. 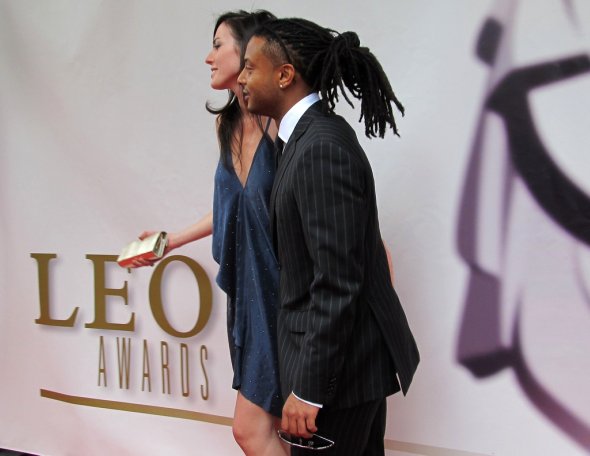 Once inside the Fairmont Hotel Vancouver, I did live-tweet the awards for several hours until I was put in Twitter jail for too many tweets and the entire system broke down as the wildness of the red carpet escalated into backstage antics by winners like Tyler Labine. Early on, though, I chatted with Leo-winning stunt coordinator David Chue about how Human Target pulled off its series-ending stunts on the hotel roof above. And I met the team behind comedy couple Brent Butt and Nancy Robertson's Vancouver-shot sitcom Hiccups. It swept all five categories it was nominated in. After their big wins, I asked Robertson if she'd mind if I took a photo of her with her Leo because I'd never seen her in a frock. She laughed, agreeing that it wasn't the kind of thing her characters Wanda from Corner Gas or Millie from Hiccups would wear. I later spied her and three-time Leo winner Gabrielle Rose on their way to the washroom giggling like school girls. Robertson's husband and avid tweeter Brent Butt skipped the Leos to catch UFC, but he did make the Celebration Awards last week at Club 560. The so-called technical people smartly arranged to have their awards presented during periods of that night's Stanley Cup Final with Game Four broadcast throughout the ceremony on a big screen. 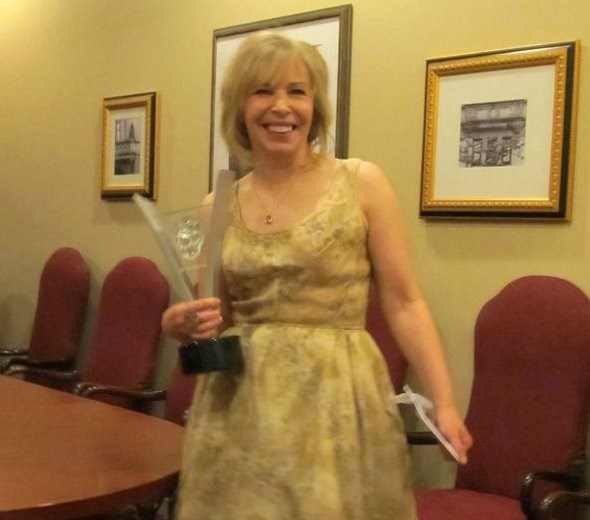 No one show dominated the TV drama categories like Hiccups ruled the comedy ones. After its slew of nominations I expected Sanctuary to take home Best Drama series but that went to American series Smallville instead (a fitting tribute to the young Superman series which filmed here for a decade). And Ryan Robbins won Sanctuary's only acting prize for his best supporting performance as a Lycan. Still from where I was, it looked like Sanctuary dominated the night in fun, with Damian Kindler and Robin Dunne even hosting the after party.