#YVRShoots - Rise of the Planet of the Apes Greenscreen

This series had its genesis when I began photographing Vancouver area location shoots last summer to get over a long post-Olympics funk.
Susan Gittins Aug 11, 2011 3:58 PM

Hail Caesar! Andy Serkis's motion-capture performance as the chimpanzee Caesar in the mostly Vancouver-filmed Rise of the Planet of the Apes is nothing short of astonishing. I am now kicking myself for not stumbling on to any of the Apes location shoots last summer, especially the one on Hornby Street of digital apes scrambling down the marble facade of the YWCA Health & Fitness Centre, which happens to be my gym. That'll teach me not to skip a workout.

Filming of Rise of the Apes began here in July last year before moving onto to San Francisco and Hawaii. When you catch this reboot of the Planet of the Apes franchise in theatres you'll see it does make for a decent game of spot the location. I didn't do well, getting caught up in the story and forgetting to look for Vancouver area locations. A friend recognized the home of scientist Will Rodman (James Franco) and his Alzheimer-addled father Charles (John Lithgow) as a heritage house up behind the Mountain Equipment Co-op Store on Broadway. Crew filmed on that street for two weeks and recreated the interior of the house for more scenes in studio. This is the house where young Caesar grows up and Andy Serkis honoured the home owners by introducing himself to them.

I did spot the BCIT Aerospace and Technology Campus in Richmond in some of the exterior scenes of GEN-SYS, the lab where Will Rodman is using apes as test subjects to develop a cure for his father's Alzheimers. And the Hornby Street location of apes rampaging through San Francisco after their escape from their "Ape Alcatraz" animal shelter, proved instantly recognizable, although I missed the anomoly of Canada Place in one of the camera shots looking north down to Burrard Inlet.

As for the climatic showdown of apes and men on the Golden Gate Bridge, most of it was filmed here with greenscreens on the huge gravel field at Kent and Boundary near the Fraser River path. Background performer Thomas C. Andrews tweeted to tell me of the five days he spent last summer running scared on that gravel, playing one of the many pedestrians/motorists trapped on the bridge. I don't know how many days in total it took to film all the sequences in that showdown but here's where I got lucky. Rise of the Planet of the Apes returned to Vancouver this spring to do some reshoots ahead of the movie's opening this month. I photographed the greenscreens, Highway Patrol cars, the extras playing Highway Patrol officers and three of the stop-motion apes (see below). None of them look like Andy Serkis, but these three performers could have played some of the other lead apes, such as  the chimp Koba and gorilla Buck. 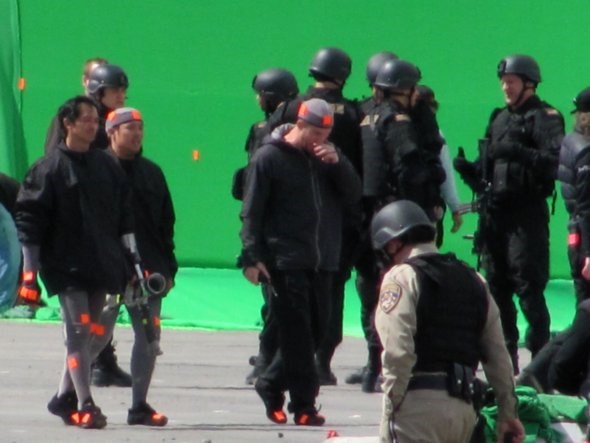 Unlike the other Planet of the Apes  movies, the apes in this one are not actors in makeup. Peter Jackson's Weta Digtial created them digitally using time motion capture, which is what the orange square markings are for. From a distance I watched one of the men playing an ape bend over simian-style and scamper along the ground with his crutches. He mimicked the movement so well that I could imagine what this ape would look like on the big screen. 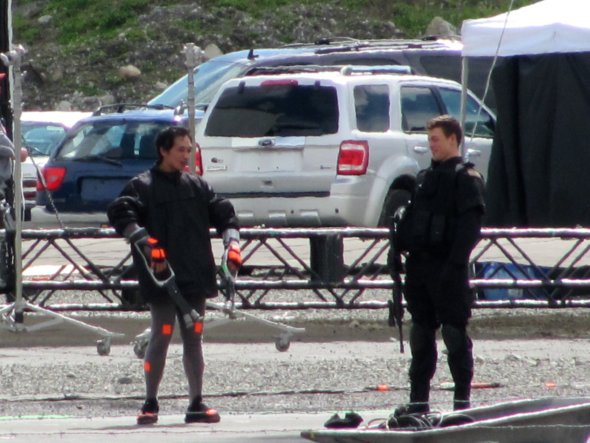 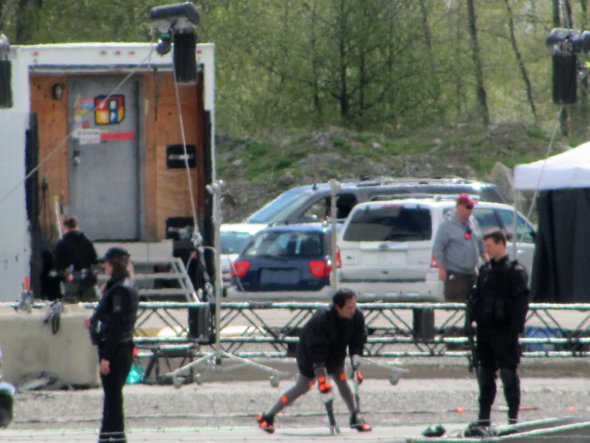 Elsewhere, crew used a crane to tip a bus on its side for reshoots of scenes where the apes upend a bus to use as a barricade from bullets as they try to force their way through the police barricade to get to the giant redwoods in Muir Park. 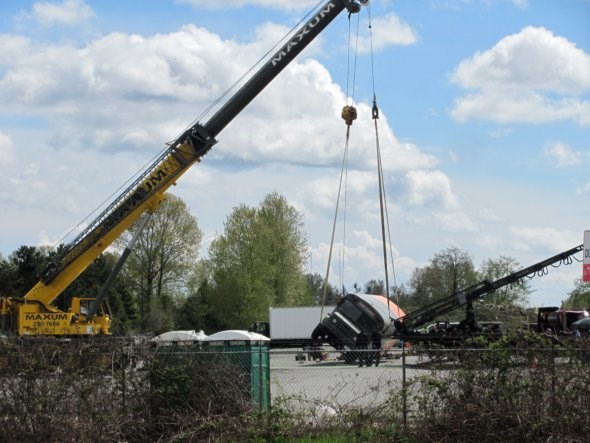 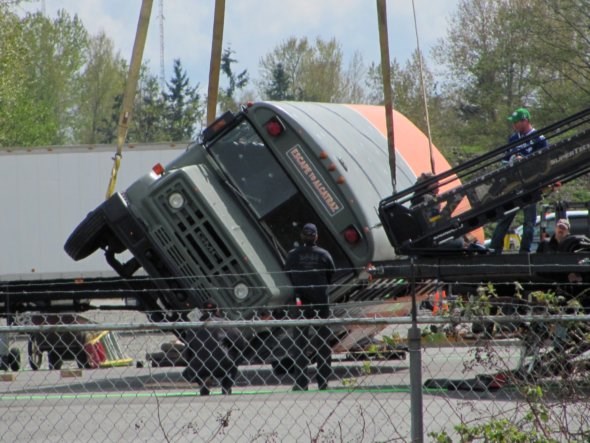 At the other end of the Kent Hangar field, crew filmed or photographed the scene of one of the mounted police horses rearing up at an ape. I spied it easily in the finished film. 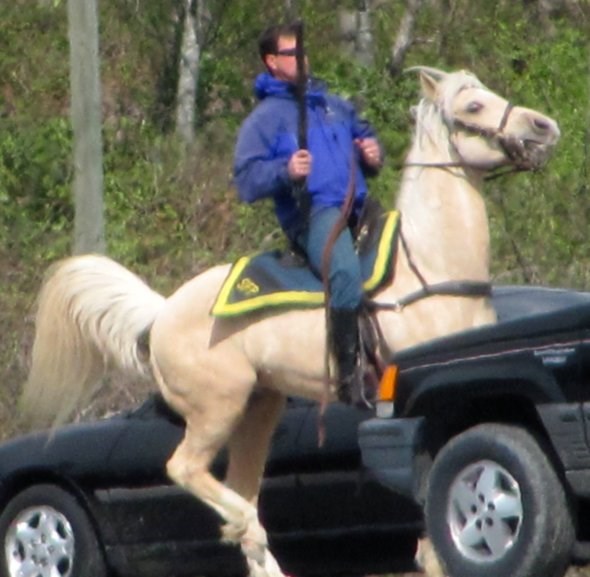 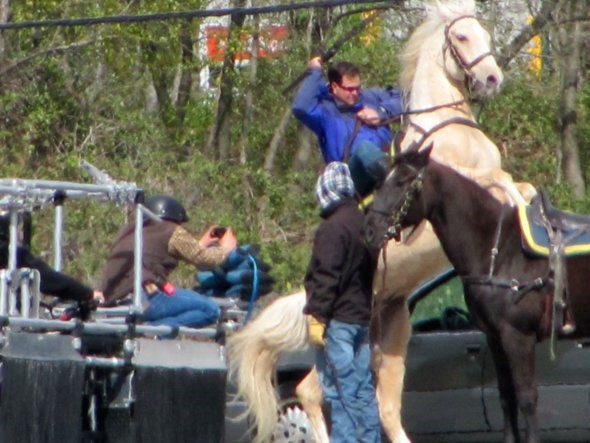 Some might complain that I'm destroying movie magic with these photos but the contrast between the raw greenscreen scenes and what I saw in the movie theatre actually made me more awestruck at what the filmmakers accomplished. For me, Rise of the Planet of the Apes is an instant classic comparable to the 1968 original (which was showing on the TV in the background of one of the Ape Alcatraz scenes; the reboot even paid direct homage with the line:  "Take your stinking hands off me, you dirty ape!") Most film critics agree about Rise of the Planet of the Apes, giving it an 82% fresh score on Rotten Tomatoes dot com. The latest Apes film grossed almost $55 million in its opening weekend,  making it the #1 movie in North America last weekend, and its week's gross exceeds its just-under $100-million budget. Sequels are  being talked about already. And so with apologies to the Twitter campaign trying to shame the filmmakers into filming the next movie in San Francisco as San Francisco, here's hoping that Caesar and his descendents continue their fight-for-freedom movie saga right here in Vancouver.