This series had its genesis when I began photographing Vancouver area location shoots in the summer of 2010 to get over a post-Olympics funk.
Susan Gittins Nov 18, 2011 4:44 PM

Earlier this week I wrote about the hundreds of University of British Columbia students who turned out to see 26-year-old Transformers star Shia LaBeouf film The Company You Keep on campus last month. Well when the production moved downtown it wasn't LaBeouf who commanded a fan following but 75-year-old  Robert Redford. Dressed-for-sucess women from thirty-something to sixty-something giggled like schoolgirls watching Redford do scenes at the Vancouver Art Gallery. I had to shush two particularly excited older ladies on Hornby whose chattering would be picked up by the boom mikes across the street and loved doing it.  Downtown men who stopped to watch the Hollywood legend on Tuesday didn't seem quite as giddy but I did overhear some calling friends to say they'd just seen The Sundance Kid in action.

It wasn't just passersby doing some stargazing but big news media too, situated as they were just round the corner at the Occupy Vancouver encampment where fire officials and city workers conducted yet another safety inspection. Photos of Robert Redford filming at the Vancouver Art Gallery appeared in The Globe and Mail, The Vancouver Sun, CBC Arts and many other outlets, making mention of his proximity to the month-old tent city, where one protester had to be dragged out of traffic by police that morning after sitting in a West Georgia street lane and refusing to move (I photographed this too).

Some expected Robert Redford to make some kind of statement about Occupy Vancouver but although Redford is a well-known political activist his causes tend to be more environmental in nature after four decades of environmental advocacy. And besides, the man is here to work: both directing and starring in a political thriller about a former Weather Underground militant played by Redford wanted by the FBI for 30 years, who must go on the run when Shia LaBeouf's ambitious reporter exposes his true identity.

Redford's scenes at the Vancouver Art Gallery looked like a media scrum for the exposed former Weather Underground radical, with Chris Cooper driving the car Redford gets into and Shia LaBeouf there as a reporter but standing at a remove from the actual scrum.

The Company You Keep first occupied the west side of  the Vancouver Art Gallery while Occupy Vancouver occupied the front two weeks ago.  Several people -- @UBCRobsonSquare, @Imohux, @darrylamiller, @davidgcami, @uuruson and @BenMcKinnon96 -- tweeted photos of Robert Redford, a prop Detroit TV news satellite truck and Chris Cooper in exterior day scenes as well as a night scene at the back of the Gallery on Robson Street.

That weekend  The Company You Keep set up at Vancouver City Hall for a five-day shoot, starting Sunday, November 6th. On my way there, three police surburbans turned abruptly in front of me down Ash from Broadway and police with rifles emerged to cordon off the block at 7th Avenue. A man with gang ties had been shot six times while walking his dog. I must have just missed the shots and it didn't seem wise to stick around. Up at City Hall, production seemed oblivious to what had happened just six blocks away. Robert Redford strolled from his trailer on the south-east corner of Cambie and 12th into City Hall several times throughout the day to direct scenes of Shia LaBeouf in the marble-sheeted double-height lobby. It's a spectacular art deco/moderne space with marble columns and mezzanine balconies.I had hoped to see an afternoon exterior scene of LaBeouf entering the lobby from the north but that was scrapped. 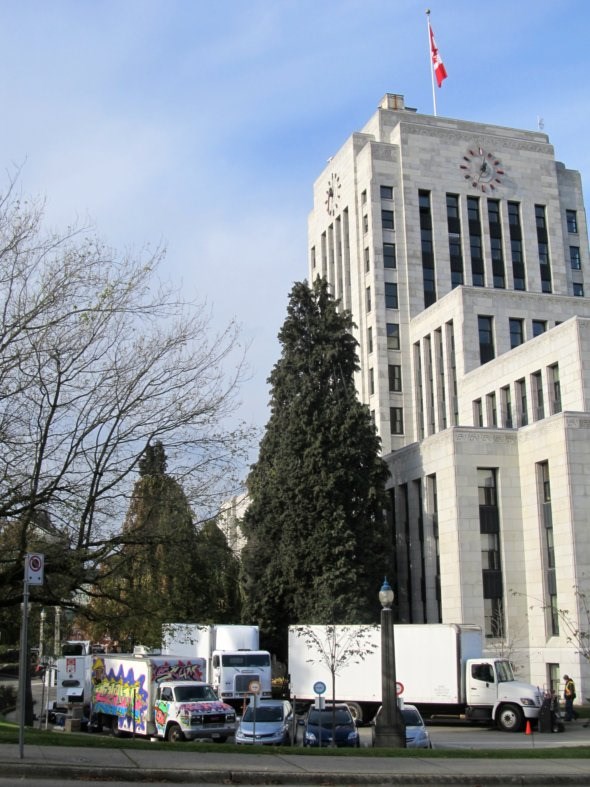 The Company You Keep moved up from the lobby to film upstairs in office space on the fourth floor. Lots of extras paraded in and out over the five days, as well as Anna Kendrick, Terrence Howard and Stanley Tucci so these may have been FBI offices. 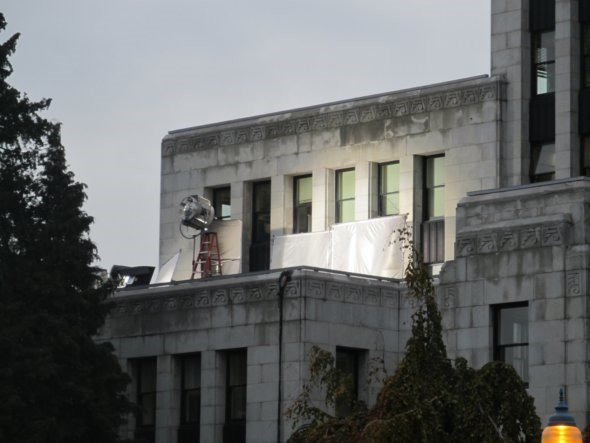 On the Thursday before Remembrance Day, Robert Redford did do a brief exterior scene near City Hall but returned by afternoon for more filming with Shia LaBeouf and Stanley Tucci. The Company You Keep wrapped filming at City Hall that night.

And then this Tuesday, The Company You Keep set up at the west side of the Vancouver Art Gallery with its prop Detroit TV news satellite van as well as a Reuters one this time. I watched from the other side of Hornby as Redford the director discussed the upcoming scene with Chris Cooper and Shia LaBeouf.

It took me by surprise when suddenly Shia LeBeouf turned and loped across the street into the Caffe Arigiano where I was standing on the steps. A local agency photographer asked him how he was doing and LaBeouf said, "Good." This is one young star who has no fear of being photographed even in character as a Clark Kent-style reporter, but I still put my camera down as he passed by me to pick up something to go.

Chris Cooper (American Beauty and the Bourne franchise) proved more old school, keeping his back to the spectators and their cameras most of the time.

The Company You Keep filmed several variations of the media scrum scene that day before packing up and moving across the street to film at the Fairmont Hotel Vancouver that night. Someone spotted Robert Redford having dinner at Earl's on Smithe and Hornby of all places, which seems to have been chosen for its proximity. Redford and his wife are said to love Vancouver and are sampling restaurants all over town during his off-time here.

Yesterday The Company You Keep set up at the Rosewood Hotel Georgia, transforming it into a Manhattan hotel, with a New York Post news box and several yellow prop New York cabs. Everything seemed to be in place when someone asked when filming might start. Crew quipped in response,  "It's on Redford time", meaning when the man himself showed. A couple of hours before the downtown's first snowfall, Redford did show to do a scene of him and Jackie Evancho, who plays his young daughter, getting out of a cab and heading into the lobby of the hotel. 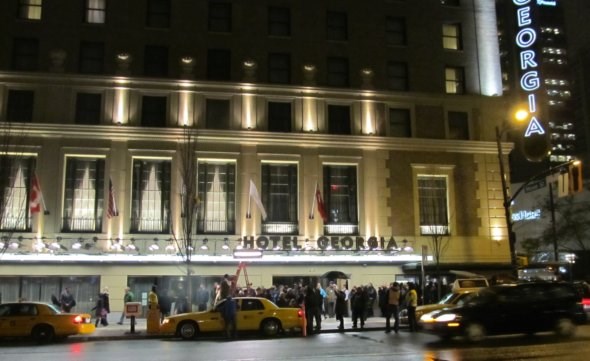 A later scene involved a NYFD truck and firefighters. And even later scenes--  sometime after the Skytrains stopped running at 1:30 a.m. -- took place inside the Granville Skytrain station.

Tonight  The Company You Keep is filming an interior with Shia LaBeouf at the Vancouver Art Gallery and a late night interior in the lobby of the Hotel Georgia maybe with Robert Redford and Jackie Evamcho again. That sounds like enough for one night of filming especially with possible trouble nearby at the OccupyVancouver tent encampment on the news of Monday's injunction.The Company You Keep is expected to wrap in Vancouver next week. I will miss having the Sundance Kid in town.

Update: Robert Redford wrote an impassioned plea calling for the shutdown of the Alberta Oil Sands in Monday's Globe and Mail, proof of his strong activism in environmental causes.