#YVRShoots - Robert Redford's The Company You Keep With Shia LaBeouf

This series had its genesis when I began photographing Vancouver area location shoots in the summer of 2010 to get over a post-Olympics funk.
Susan Gittins Nov 14, 2011 1:32 PM

The Company You Keep is a political thriller starring Robert Redford as a former Weather Underground militant wanted for a Bank of Michigan robbery by the FBI for 30 years, who must go on the run when Shia LaBeouf's young, ambitious reporter exposes his true identity. It's an odd pairing of Hollywood icon and Sundance Film Festival founder Redford with LaBeouf, best known for the blockbuster Transformers franchise and his off-set antics as LaBrat. 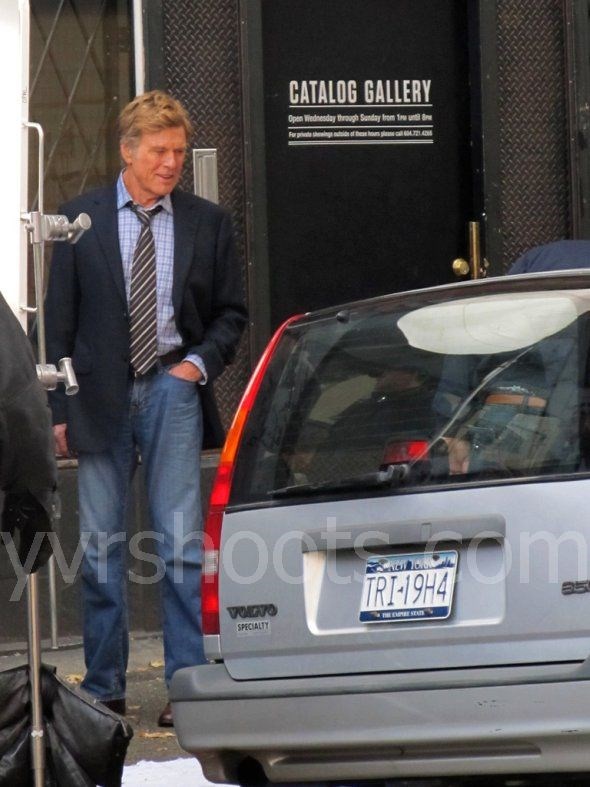 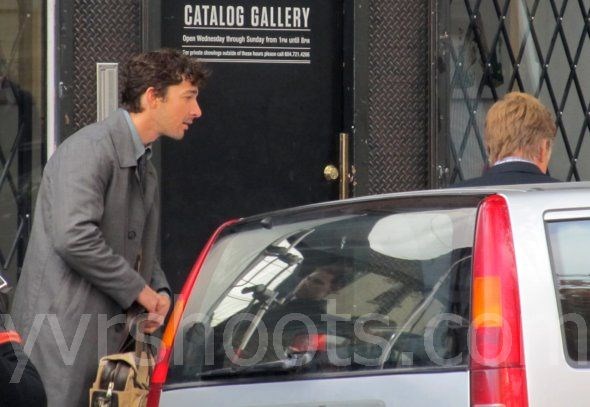 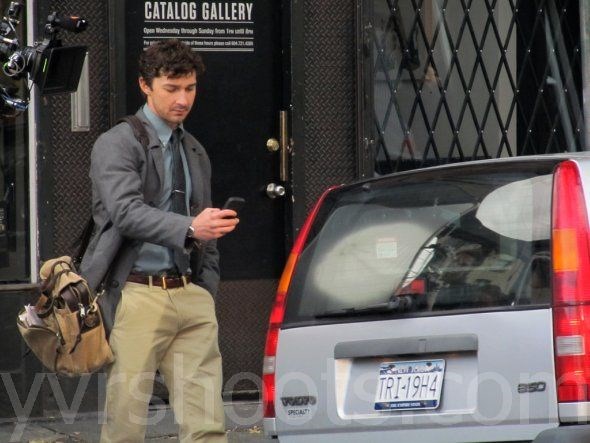 Robert Redford, who directs the film based on a book by Neil Gordon, added a who's who of older Hollywood to his cast: Susan Sarandon and Julie Christie are his ex-Weather Underground associates; Sam Elliot is Julie Christie's boss in the marijuana trade, Richard Jenkins is a college professor linked to the former radicals; and Brendan Gleeson is the original cop who investigated the bank robbery. I don't know who Nick Nolte plays but I hope it's a grizzled ex-Weather Underground associate. Chris Cooper, Stanley Tucci and Stephen Root are also in the cast but it's not known who they're playing either.

Anna Kendrick is the young FBI agent and former flame of LaBeouf's reporter who gives him information about the bank robbery and Terrence Howard is the senior FBI agent heading up the task force to take down the Weather Underground fugitives in a nation-wide manhunt. Jackie Evancho (an 11-year-old finalist on America's Got Talent) plays Redford's daughter, who doesn't know anything about her Dad's radical past.

I first heard about The Company You Keep coming to Vancouver on July 19th from Deadline Hollywood and immediately tweeted on #yvrshoots that Robert Redford and Shia LaBeouf would be in town in September. A Twitter pal told me that day that The Company You Keep was already scouting a location near Pitt Lake.

Two months later, filming started out in Langley. Both Robert Redford and Shia LaBeouf  were spotted on location but I didn't see any photos until a teacher at Brookswood Secondary School snapped a blue-jacketed Redford out in the school parking lot. Not long after, the Langley Times published a wonderful photo of Redford and Susan Sarandon chatting on set in Fort Langley.
The final week of September, The Company You Keep filmed even further out in the Fraser Valley in Maple Ridge and on River Front in Pitt Meadows. Someone in Pitt Meadows tweeted me to let me know that they were filming behind her house. She couldn't see anything  but tipped me that they would return on Friday for exterior scenes. Unfortunately Friday was CBC Live at CBC Vancouver and I couldn't go.
Not many photos surfaced in the first four weeks of filming here except for pap photos of Shia LaBeouf out and about downtown -- either riding his bike or going to a local Blenz. He seemed to be papped daily except at the Cinema Public House on Granville  where he'd been a regular patron until mid-October when he got into it with a man inside and security kicked them both out. Someone videotaped the man tearing off his shirt outside and then repeatedly pumching LaBeouf in the head, pummelling him to the sidewalk.  If you watch it, you'll hear LaBeouf wanting to chase after the guy but a friend holds him back saying, "You gotta lay low right now!" Little chance of that after TMZ bought the video of the beatdown.
That week, The Company You Keep is said to have filmed on Bowen Island, one of my favourite places after spending two summers living in the float home in Snug Harbour, but I didn't learn about the shoot until the day after.
I did hear The Company You Keep was setting up to film on campus at the University of British Columbia a week later when I was on the North Shore watching a shirtless Henry Caville do a rescue scene on a Man of Steel greenscreen set. I reluctantly left the shirtless new Superman and went to to UBC that afternoon to see crew wiring the CHEM and Henning buildings near the Main Mall and Agricultural Road.
That Wednesday, October 26th, The Company You Keep began filming in a hallway inside the CHEM building. Some mistook it for TV series Fringe since the CHEM building is Walter's Harvard lab in that series and Fringe regularly films there but it didn't make sense once students spotted Robert Redford not John Noble in the building. I watched a scene in the afternoon of Redford and Richard Jenkins (the dead father from Six Feet Under) walking and talking out the south door of the CHEM building and down into an inner courtyard. Students asked me who Robert Redford was and I tried to explain what an icon he is. They didn't know any of the films I mentioned like Butch Cassidy and the Sundance Kid, The Sting, Three Days of the Condor, Out of Africa and The Horse Whisperer but some had heard of the Sundance Festival he founded. That night The Company You Keep filmed a scene in the Hennings building auditorium of Richard Jenkins as a professor finishing off a lecture and then after every student leaves, Redford walks in.
On Thursday morning, The Company You Keep filmed inside the Pendulum at the Student Union Building (SUB) so I opted to go back to the North Shore to see a Man of Steel burning building scene. It was the wrong choice because after SUB, The Company You Keep set up on the Main Mall in as open a shoot as could be. Shia LaBeouf and co-star Brit Marling did a long walk down the mall into the CHEM building in take after take in the autumn sunshine. I hurried back but missed seeing Robert Redford and LaBeouf laughing together while hundreds of UBC students watched. I did get there in time for some scenes without Redford. 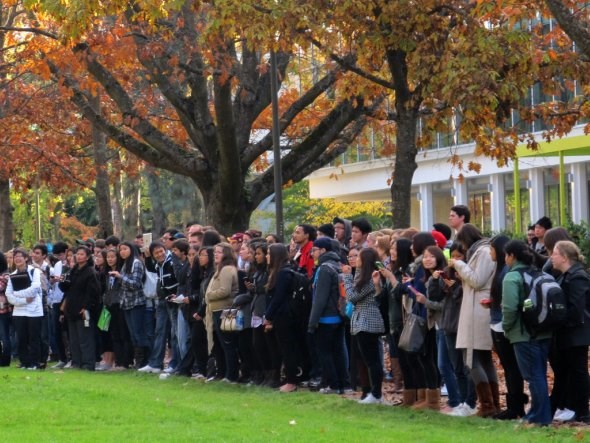 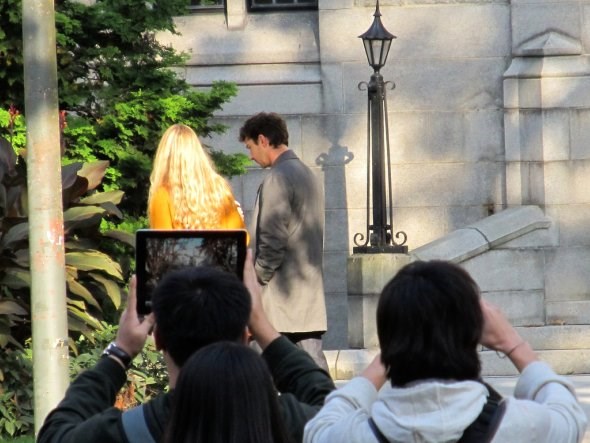 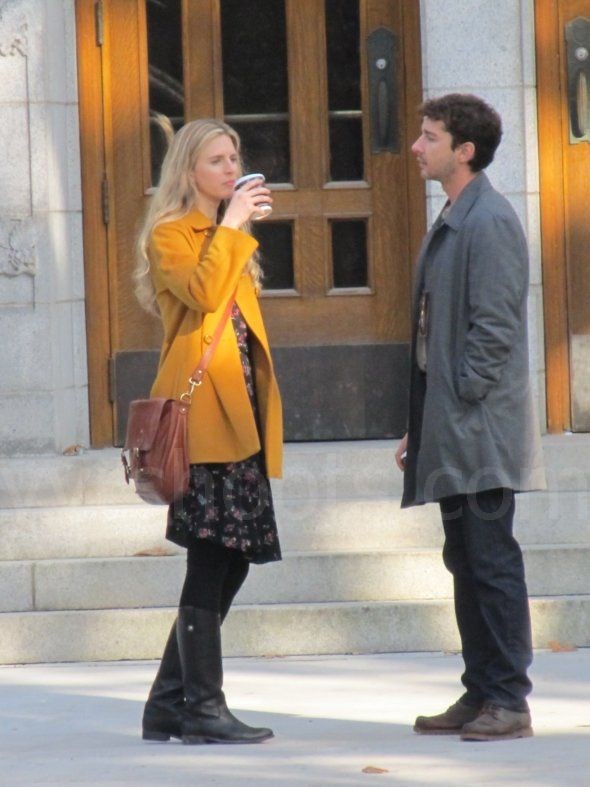 I couldn't resist photographing the student recording the scene on his iPad above. Although I just missed Redford, I did get to see them do more takes of the tracking shot of LaBeouf and Marling walking down the Mall. 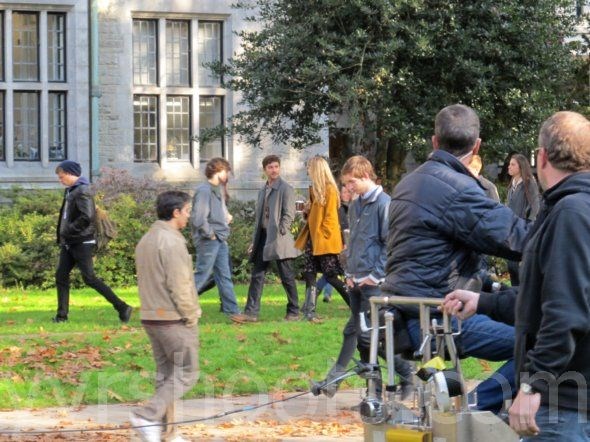 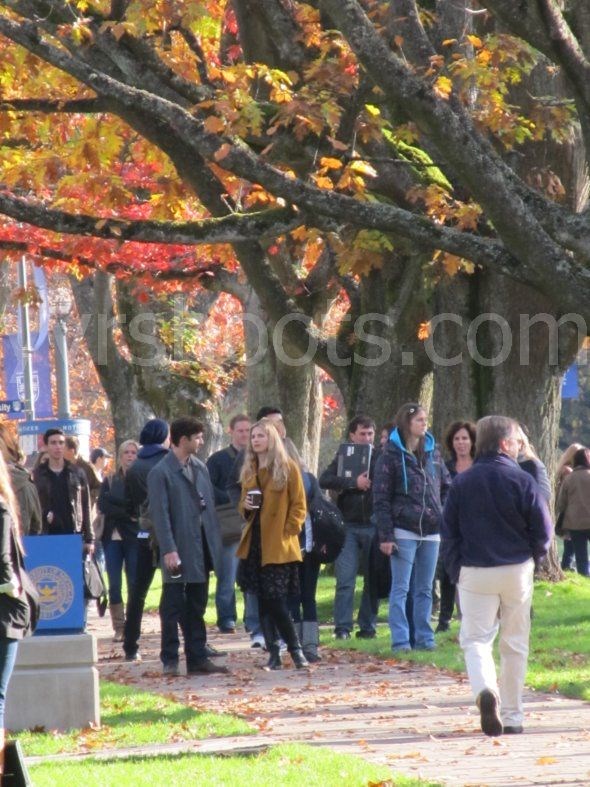 Afterward there was one final scene by the Koerner Library before the light went of Shia LaBeouf in a graduation gown, this one directed by Redford.

On Friday, UBC students spotted trucks and crew at the Museum of Anthropology setting up for an overnight shoot as students in Halloween costumes rocked the campus. Whatever they filmed at the museum didn't take place in the big hall with the totem poles but at a photography exhibition in an east wing.

The Company You Keep finally went downtown on Halloween, filming interior scenes with Robert Redford and Shia LaBeouf at an apartment above a tattoo parlour near Powell and Columbia in Gastown. This proved to be a big pap opportunity as LaBeouf and his visiting girlfriend Karolyn Pho shared kisses between scenes. I waited to see them film the exterior scenes the following day which turned out to be crazy-busy with four different productions filming in the downtown area. Early in the morning on November 1st someone spotted Redford directing a scene with LaBeouf apparently reporting outside the Segal Business School turned Bank of Michigan bank. By the time I got there, Redford and crew had moved on to filming in an alley off Carrall Street and then at Main and Alexander.  Around lunchtime I finally caught the key scene of Redford getting into his Volvo station wagaon while LaBeouf chases after him for a quote. 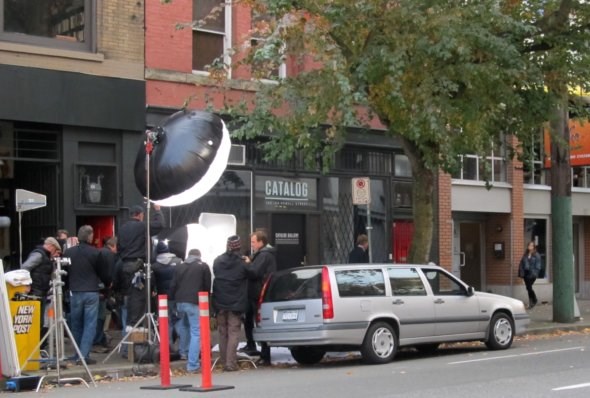 Update: The Company You Keep had such a great open shoot of Robert Redford in a media scrum at the Vancouver Art Gallery the day after I uploaded this blogpost that I'm going to write a second one this week.