#YVRShoots - Making of This Means War in Vancouver

This series had its genesis when I began photographing Vancouver area location shoots in the summer of 2010 to get over a post-Olympics funk.
Feb 27, 2012 3:34 PM By: Susan Gittins

Thanks to real bro chemistry between Chris Pine (Star Trek reboot's Captain Kirk) and Tom Hardy (Bane in upcoming The Dark Night Rises), the bromance in This Means War works much better than the actual romance, which flounders on the premise that Reese Witherspoon's character is so supremely attractive that these two men would risk their friendship to war over her. Witherspoon is beautiful and an acclaimed actress but she's miscast in this role. On the other hand, I had no problem with the  idea of blending of action, romance and comedy -- if done well -- in a story of spy versus spy, who use their CIA resources against each other after they discover they've fallen for the same woman. But the execution of this movie felt choppy and clumsy in both writing and editing, as if three different movies had been spliced into one.

That might have been the case, judging from the number of Vancouver scenes cut in editing, including the ones I photographed below in Yaletown and North Vancouver's Lonsdale Quay Market, as well as some at Gastown's Incendio restaurant. Director McG (in my Yaletown photo with Tom Hardy & Reese Witherspoon) even shot three alternate endings to the romance, including a fun "homoerotic" one of Pine and Hardy in each other's arms and Witherspoon with nobody -- which I might have preferred. 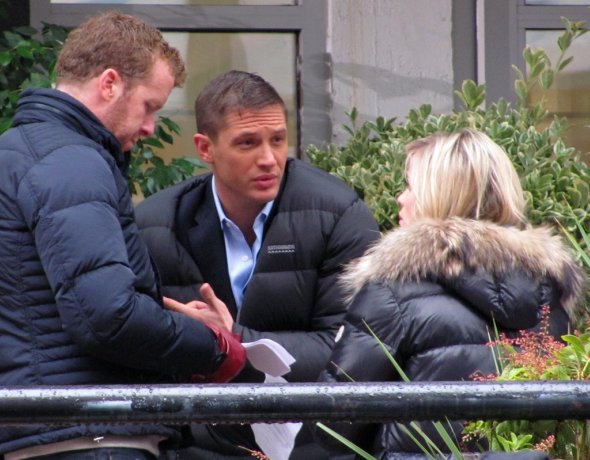 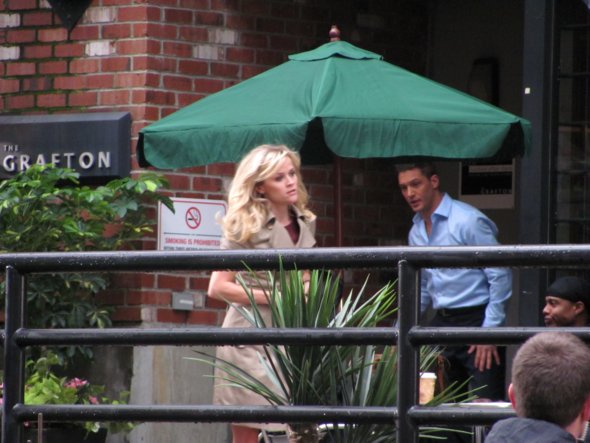 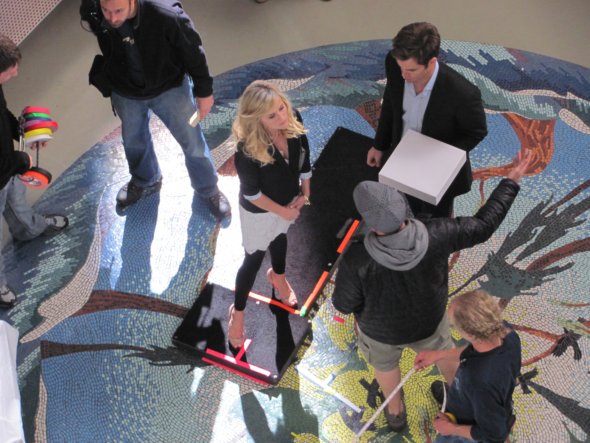 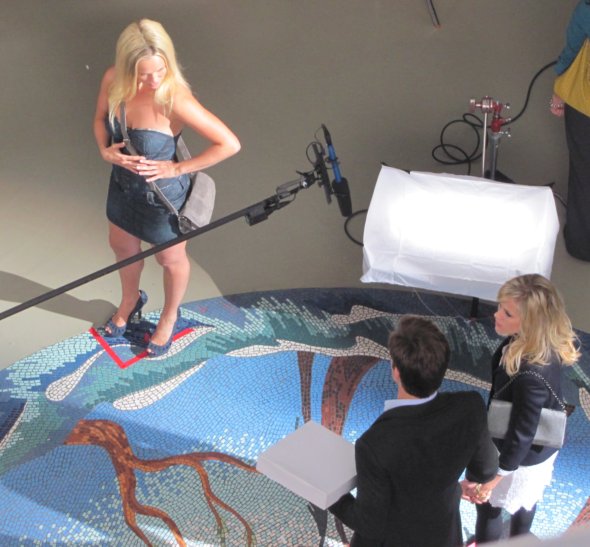 This Means War opens with a spectacular action sequence on the roof of the Bentall 4 tower  in Vancouver as Hong Kong.  CIA agents and best buds FDR Foster (Chris Pine) and Tuck Hensen (Tom Hardy) are on a mission to stop arms dealer Heinrich, played by Til Schweiger of Inglorious Basterds fame, from acquiring a WMD at a fancy hotel rooftop party. One of the party girls is V's Laura Vandervoort in a red wig.  Our heroes try to prevent Henirich and his brother Jonas, played by Clint Carleton, from boarding a helicopter parked outside. Heinrich successfully parachutes off the roof in a breathtaking stunt sequence performed by David Clem-Major in a black parachute off the Bentall 4 roof downtown in late October 2010. I just missed seeing his first parachute jump but caught them filming the landing on Dunsmuir the following night from a multi-storey crane. 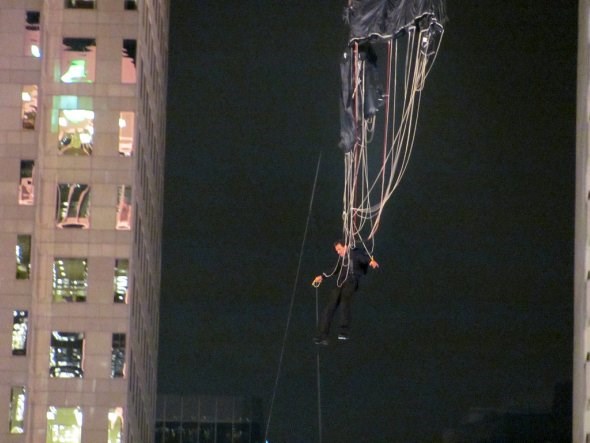 Heinrich's brother Jonas does not escape so easily. FDR and Tuck knock the brother off the roof in a fight to save Tuck, ripping off his parachute. Stuntman David Clem-Major performed this dead drop from the roof of Bentall 4 onto Dunsmuir in the middle of the night for safety reasons.  Earlier, crew used a weighted dummy to simulate Jonas crashing onto a moving car. I watched that stunt from a spot near the video tent at a safe distance from the flying debris. 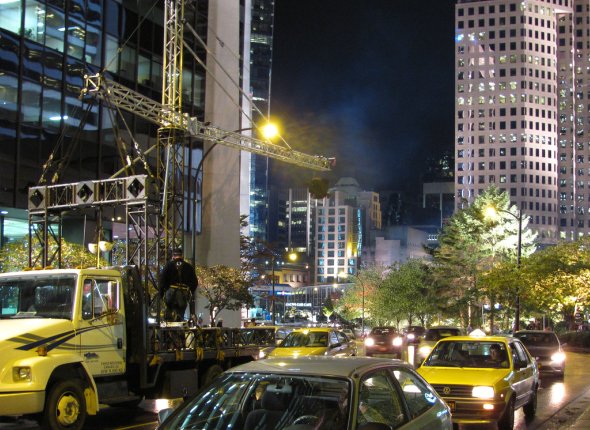 A month later, This Means War filmed the aftermath of the fall on Still Creek Drive in Burnaby dressed like a Hong Kong street, starting with some closeups of Til Schweiger landing with his parachute and then scenes of him walking him over to see his dead brother on the roof of the car. They filmed Jonah's funeral in Burnaby's Central Park with fake gravestones but that scene didn't make it into the final cut. 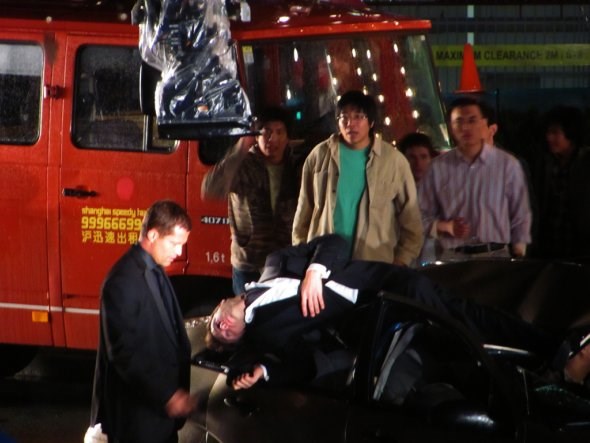 This Means War then jumps to Los Angeles spy headquarters filmed at Richmond's BCIT Aerospace campus, with boss Angela Bassett telling FDR and Tuck that they're grounded because of Jonah's death. We then see Reese Witherspoon running into her ex-boyfriend (Warren Christie of Alphas) and his new fiance while dressed in gym gear and singing to herself at the Vancouver Public Library, filmed in early October 2010. Her character Lauren Scott, a product testing executive, runs into them again, even more pathetically as she's eating "Sushi for One" in a Yaletown sushi restaurant doubling for L.A.

Our next scene takes place in the $3.2 million penthouse of the Keefer Hotel in Chinatown where FDR apparently lives on a government salary. Only in the movies. Above Chris Pine's head is a girl swimming in the ceiling lap pool filmed in mid-October 2010, along with all the scenes in this luxury penthouse. 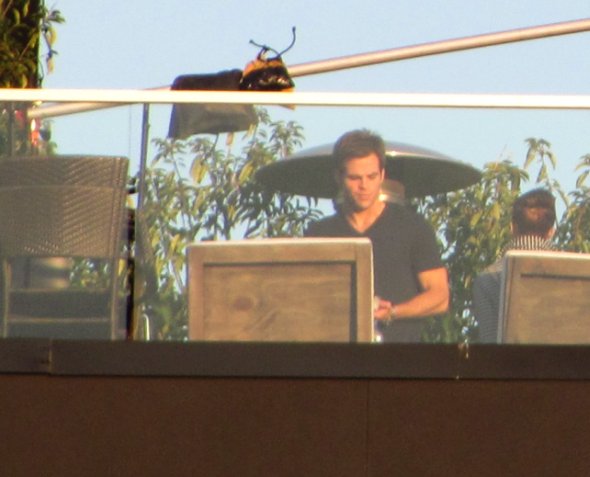 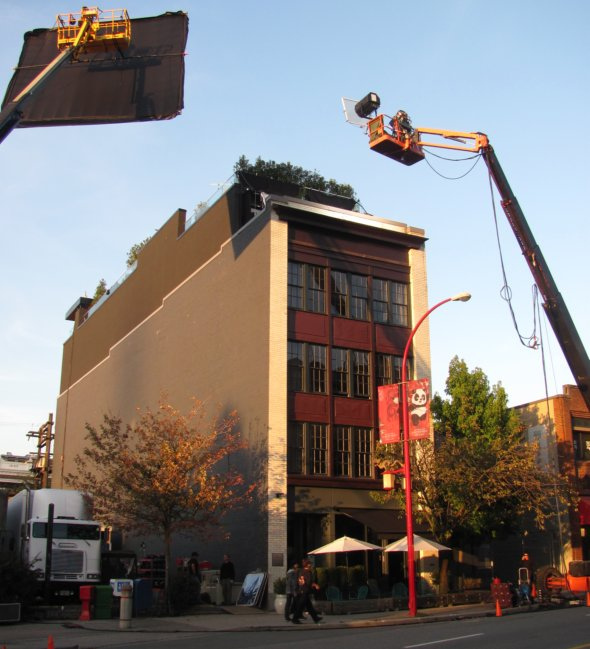 In contrast to womanizer FDR, Tuck is revealed to have an ex-wife and a seven-year-old-son Joe, whom we meet in a martial arts class getting beat up by another boy at his Dajo (filmed in Steveston in late October 2010).  The instructor (the very tall Aleks Paunovic of Arctic Air) hurts Tuck, who has to hide his lethal skill set in everyday life.

Meantime, Lauren Scott's friend Trish, played by Chelsea Handler, has put up her profile on a internet dating site called fate.com, which Tuck reads and then quickly arranges to meet her. Tuck and Lauren hit it off at an outdoor table at The Blarney Stone in Gastown as itself, a location shoot I missed seeing. After agreeing to a date with Tuck, Lauren leaves him to go rent a movie on the lower floor of HMV at Burrard and Robson (now closed), where FDR tries to pick her up, not knowing that she's Tuck's new prospect. Lauren shoots down FDR's player moves, telling him she's not a "one-day rental". Intrigued, FDR uses CIA resources to find out who Lauren is and shows up in one of her test audiences, refusing to leave until she agrees to meet him the next night at the Barcelona night club.

Back at CIA headquarters, Tuck and FDR discover they're chasing the same woman in a funny scene where they turn around their laptops displaying the exact same photo of Lauren . After some bickering, they agree to let her decide, coming to a "Gentleman's Agreement" to let the best man win. Tuck then takes Lauren on a date to the Santa Monica pier, actually a constructed fair set at Hastings Park next to the Agridome on a freezing November 2010 night. 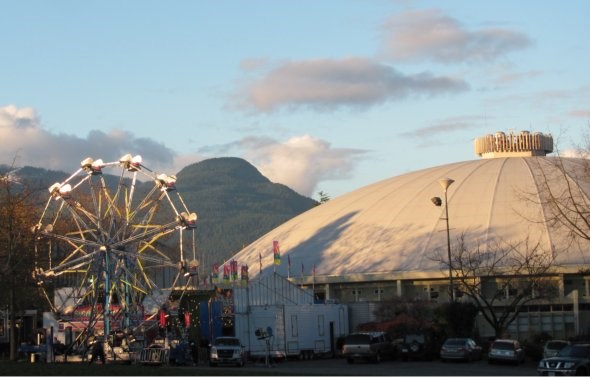 I felt so sorry for the extras on set and for Reese Witherspoon and Tom Hardy dressed as if in California on a summer's night. After the fair set, production moved inside the Agrodome for the scenes of Tuck and Lauren on trapezes and then making out in the net below.

Contrast this with FDR's idea of a date at the Barcelona Club on Granville Street,  filmed here in early October 2010. That Granville Street shoot may be my favourite Vancouver area location shoot ever. It was so chaotic. Chris Pine did his own stunt-driving in an Audi half a dozen times, driving south on Granville and then making a fast u-turn to end up in front of Barcelona where Reese Witherspoon's Lauren is in the lineup in her little black dress. A drunk young woman coming out of one of the many Granville bars spotted Pine, yelled out "Woo hoo Captain Kirk" and then fell over on the sidewalk. Police didn't stop traffic, so buses continued to pass through the shoot one after the other. Production assistants tried to fool passerbys into thinking they were watching the filming of a mayonnaise commercial, not a major feature, but eventally gave up because it so obviously wasn't a commercial. 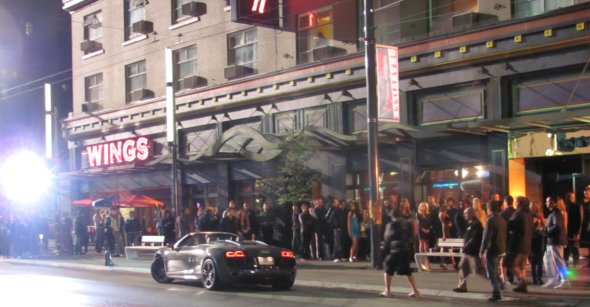 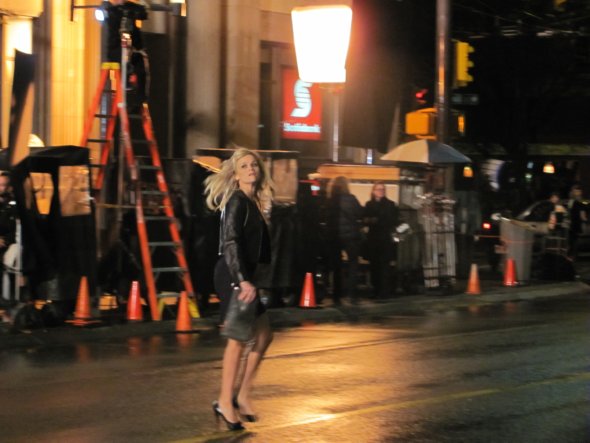 Between takes, Reese Witherspoon bundled up in a big down coat and beige Uggs. In the movie, she runs out of the Barcelona Club, telling FDR she doesn't want to know a club rat. FDR chases after her across Granville as the movie cuts to New Westminster outside the Paramount Theatre (a strip club) on an even colder night for the big kiss. I was there and caught Chris Pine yawning between takes but the kiss itself was screened off. This Means War filmed this scene of Witherspoon mauling Pine in late November, on a night so cold I had to keep retreating into a nearby Waves every 10 minutes or so to warm up (Witherspoon wrapped filming in Vancouver that night). At the time, I didn't understand why Witherspoon's Lauren instigated the kiss until I saw the scene in the movie of her spotting her ex (Warren Christie) and his fiance walking towards her and FDR. Afterwards, FDR and Lauren go for pizza in another scene filmed on Granville Street in October 2010 opposite Barcelona.

Meanwhile, Tuck has reconned FDR's date with Lauren and the stakes rise as both spies start using agency resources to recon and sabatogue each other's dates. And to complicate matters, the warring spies learn that their common foe, Til Schweiger's Heinrich, is hunting them. FDR and Tuck go to a strip club to find Heinrich's LA contact Ivan, played by Stargate Universe's Mike Dopud.

Chris Pine and Tom Hardy filmed inside the venerable Vancouver strip club The Penthouse in early December 2010 for two days and nights with stripper and Russian gangster extras. Crew had changed the usually explicit Penthouse sign to a PG  "Beautiful Girls Appearing Nightly" from "Alzare & Crimson Appearing Nightly."  Our heroes had one exterior scene at night of them entering the club where they fight the Russians by the stripper pole. It was Hardy's last night of filming in Vancouver and the on-screen rivals had a great time laughing and acting out stories in between takes, as you can see in the photo below. 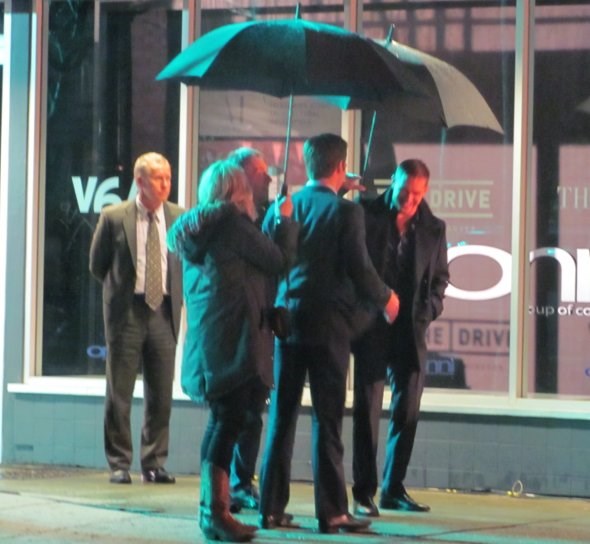 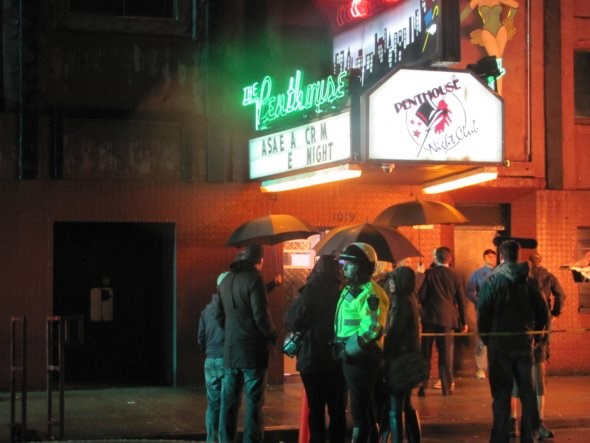 Back to the romance: Lauren goes on a series of dates with Tuck and FDR, before deciding on a sex tie breaker.  FDR and Lauren buy a pie at Lonsdale Quay market in a cut scene ahead of a family dinner at his Grandmother's house. Afterward they engage in mind-blowing sex apparently.

Lauren arranges to meet Tuck to tell him she's made her choice at a restaurant played by The Town Hall on Alberni Street downtown. After video footage confirms Til Schweiger's Heinrich is in L.A. to seek revenge against them, FDR goes to warn Tuck at the restaurant. But Tuck doesn't believe that's why he's there and the two romantic rivals get into it in a stupendous two-floor fight scene. I watched some of  the elaborate sequences with stunt doubles and the actors from the outside in early November 2010, catching glimpses of their bloodied makeup during breaks. 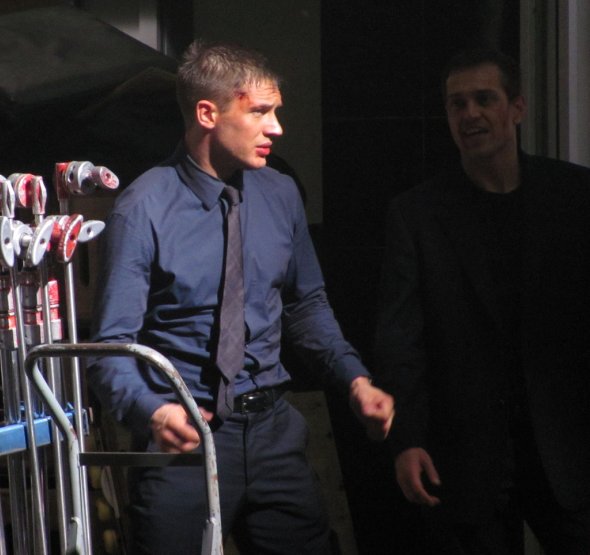 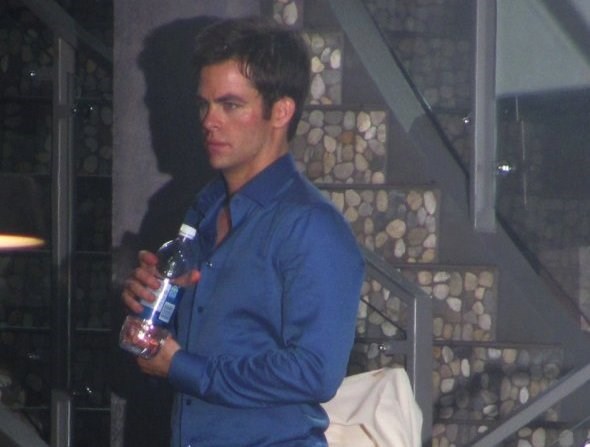 Realizing that her two suitors know one another, Lauren leaves during the fight, only to be abducted by Til Schweiger's Heinrich. FDR and Tuck pursue them in a car chase sequence, some of which was filmed in the New Westminster parkade above Front Street in November 2010. I caught stunt crew exploding a vehicle in flames one weekend, which might be the fireball seen in the movie, but most of the chase sequence was redone in L.A. in reshoots last fall. 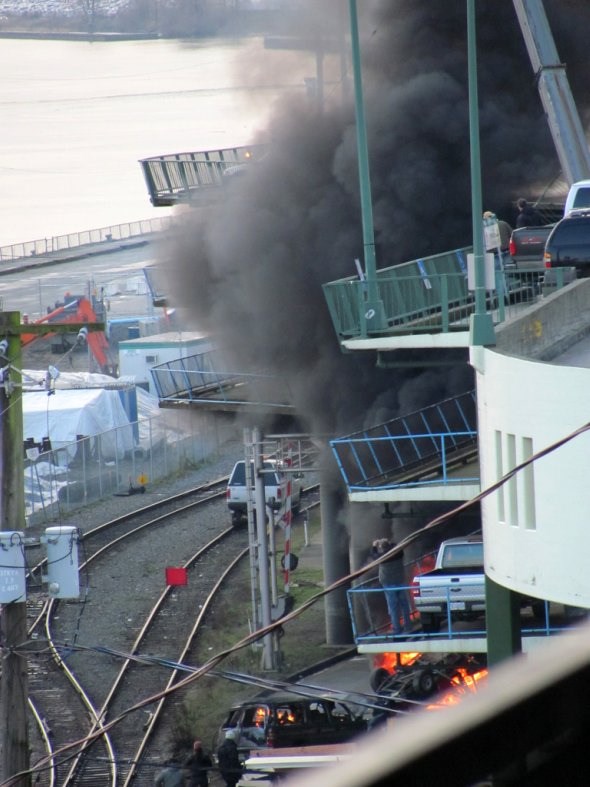 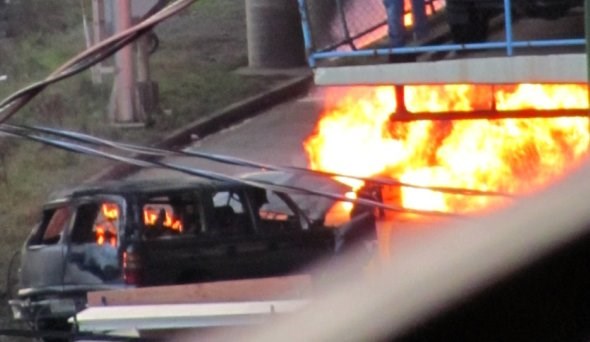 You can tell which scenes are L.A. reshoots by the extra weight Tom Hardy is carrying from his role as Bane on The Dark Knight Rises. After rescuing Lauren, FDR and Tuck confess they are CIA agents as they chase Heinrich to his death off an under-construction L.A. freeway. Lauren ends up in FDR's arms. Tuck later reunites with the mother of his son.

I look forward to This Means War's Blu-ray/DVD for the many deleted Vancouver scenes and alternate ending with FDR and Tuck ending up in each other's arms instead of hugging and then jumping out of a plane fighting because FDR has confessed to sleeping with Tuck's wife.