In the third year of this series, expect me to write about and photograph the current film and TV productions -- Tomorrowland, Once Upon a Time, Arrow, Supernatural, Bates Motel, Almost Human, Once Upon a Time in Wonderland and our own Arctic Air and
Susan Gittins Oct 5, 2013 1:17 PM 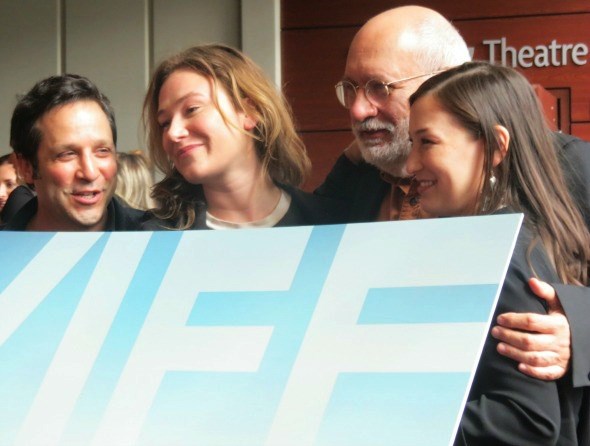 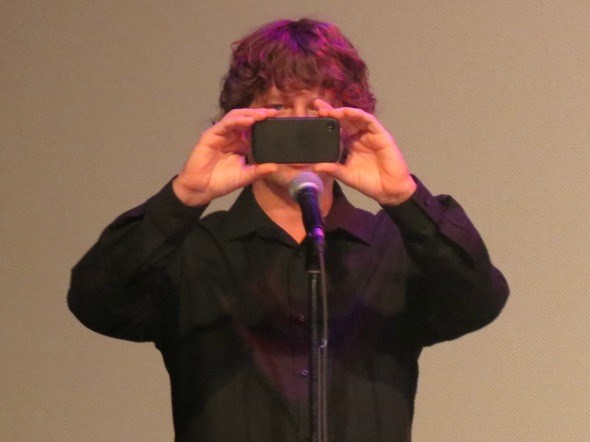 Saturday night: 3 Days in Havana at the RIO theatre.

Longtime Vancouver friends Gil Bellows and Tony Pantages talked for decades about making a movie together, so what better place to debut their first feature film than VIFF. Shot mainly on location in Cuba, the Hitchockian twister opens with a scene of a real-life Havana fortune teller playing the Death card for Jack Petty (Gil Bellows), seemingly a Canadian on a routine business trip to the Caribbean island. Will Death coming calling for Petty? Befriended by charming rogue Harry Smith (Greg Wise), he gets a personal tour of the city’s stylish and seedy attractions, populated by untrustworthy characters like Anders (Christopher Heyerdahl) from the Canadian Consulate, mob operative Benny (Robin Dunne), Pepe (Toronto indie director Don McKellar) and intense man (Michael Eklund). At the back of it all — mob boss Francis Liddy (John Cassini) and the mysterious broker (Phyllida Law).

How did this stellar Canadian-British cast come about? Gil Bellows is “dear friends” with Greg Wise (Emma Thompson’s husband) and Phyllida Law (Emma Thompson’s mother). Another close connection: Tony Pantages and Christopher Heyerdahl went to high school together in West Vancouver, where many in the premiere audience seemed to be from, including their former drama teacher who was listed in the credits. 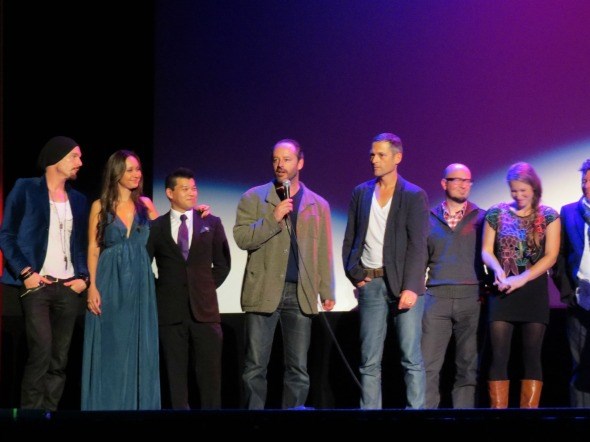 Sunday night: That Burning Feeling at the RIO theatre.

If John Cho’s wife hadn’t become pregnant, he’d be the charming womanizer with just about everything who wakes up one morning with the one thing nobody wants — That Burning Feeling. But Cho couldn’t commit to a month of filming in Vancouver, so an endearing Paulo Costanzo took on the lead role and Cho the supporting one of the zen-spouting, money-grubbing real estate developer. Cho almost stole Vancouver director Jason James’s movie about the “fire down below” if not for Tyler Labine’s casting as the wildman neighbour. Labine is ”awesome at improv” as everyone knows but Jay Brazeau is no comedic slouch either as the womanizer’s doctor. Asked why he’d committed to this STD comedy,a deadpan Brazeau told the premiere crowd: “I’ve always wanted to work in Mission. And I’m interested in gonorrhea.”

Adam Murphy (Paulo Costanzo)’s diagnosis is the start of his transformation. He must tell all of his recent sexual conquests about his little problem. Trouble is he doesn’t know their names because he had no intention of seeing them again. To James and writer Nick Citton’s credit all of these women are fleshed out over the course of the film as we come to know their hopes and dreams, not just the two or third word description next to their digits in Adam’s phone. Plus female lead Ingrid Haas, who plays the woman Adam falls for, is convincing as the one woman he’d change his ways for. 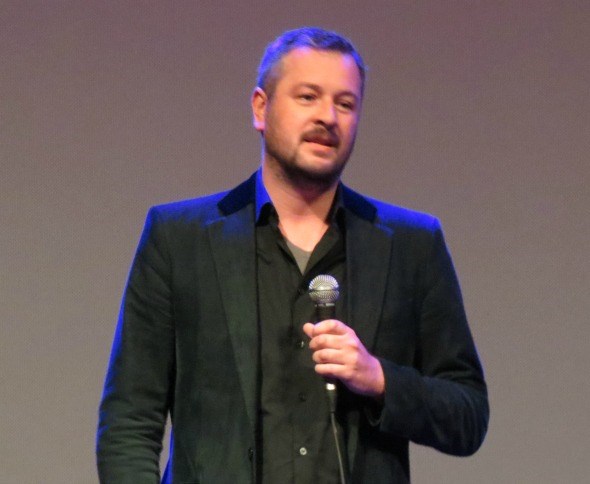 The funniest thing about sports talk-show host Dick Knost in Bruce Sweeney’s funny film? It’s hard to choose but Knost’s obsession with increasing his Twitter followers rang true. Knost’s controversial tweets about hockey concussions, done to gain followers, draw the ire of his network bosses. And then Knost is concussed himself and his team scrambles to get him back to work and save their jobs. Sweeney acknowledged to the hometown crowd that the Dick Knost character is loosely based on Sportsnet’s Bob McCown, who doesn’t appear to have a problem with that.  Tom Scholte proved totally believable in the role of a shock jock with his baritone voice, caustic wit and mop-of-hair wig. So completely did Scholte inhabit the Dick Knost character that I couldn’t be sure the actor was on stage for the Q&A until he spoke. And co-star Gabrielle Rose more than holds her own as Dick Knost’s increasingly desperate producer, not sure how to deal with a concussed and passive Knost, who spends his days feeding  ducks in scenes filmed at Lost Lagoon in Stanley Park. 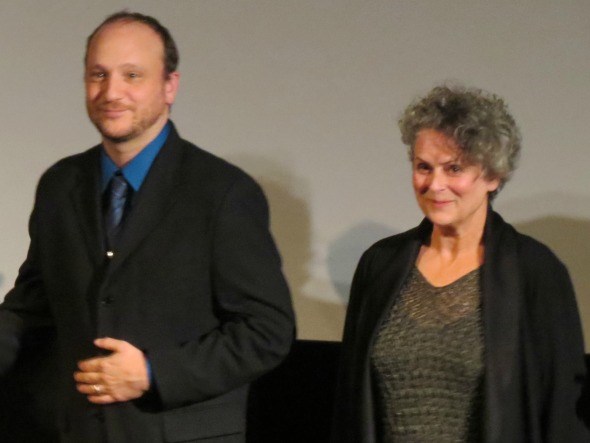 Monday night: Leap 4 Your Life at the RIO theatre.

Twenty-something Taylor Hill wrote her mockumentary during the final semester of her degree, produced it, cast it and designed costumes for it with her mother and co-stars in it as dweeby tries-too-hard contestant Molly, wearing braces supplied by her dentist father. ”It was either get a car and move out or make a movie,” the now 24-year-old joked at the premiere. The young filmmaker told the packed house that she wrote Leap 4 Your Life with specific cast in mind and got them all. April Telek is Maureen, the wildly competitive leader of a teen dance troupe;  Allie Bertram is Hilary, her star pupil; Mackenzie Porter is Brooke the runnerup, an aspiring country singer; and Reece Thompson is Matt the token male, whose father (a hilariously befuddled Peter Benson) assumes his son is gay for choosing dance as his “sport”.  The stage parents have some of the funniest lines and scenes in what is already a very funny film directed by Gary Hawes.  It's no surprise that this “little film that could” won the Audience Must See Award and red-carpet Screening in VIFF’s online #mustseeBC contest for BC filmmakers. 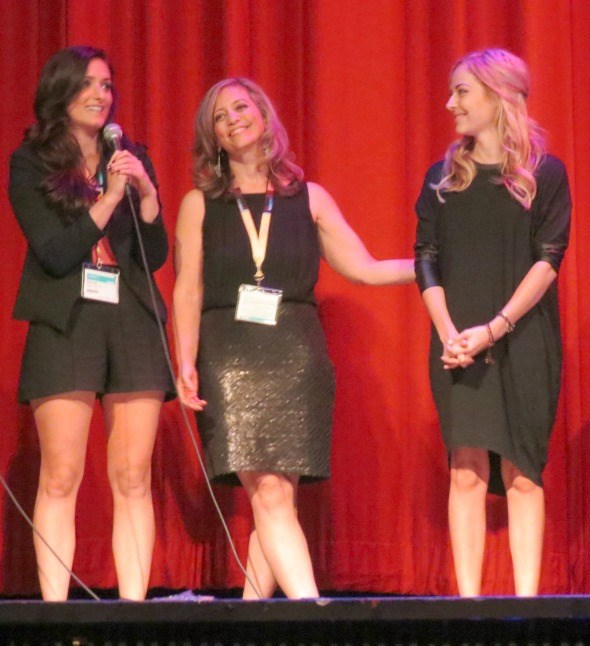 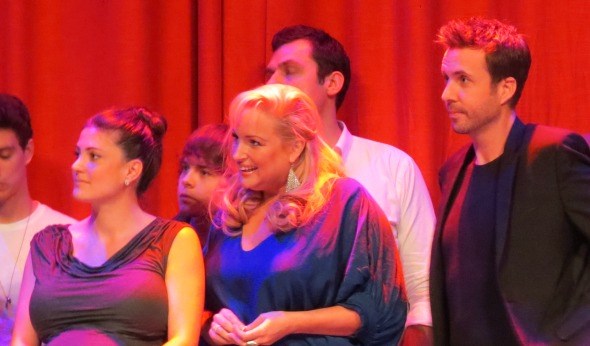 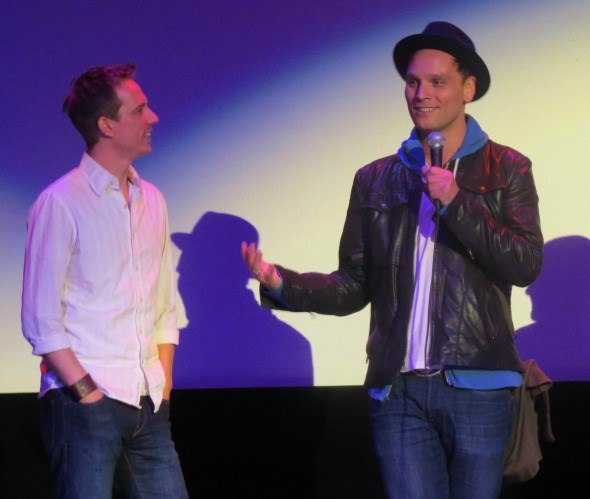 Inspired by Krzysztof Kieslowski's Three Colors Trilogy, Vancouver director Terry Miles follows a central female character Grace (Lauren Lee Smith) as she reluctantly gets to know her estranged and famous father John Laurentian after his death by agreeing to curate a restrospective of his art cinema films. Miles joked there should have been a drinking game for every time Grace looks sad in his film, but the premiere audience would have been incapacitated. It's an anti-romance with Grace married to an oblivious investment banker (Ben Cotton) but beautifully shot on location in Gastown by the director, who also hung the lights and did craft service, joked his cast. Miles knows he doesn't have to shoot his own films but really enjoys it. Not many directors would over 32 days of filming.

Tonight: Down River at the Vancouver Playhouse.

What happens when you lose your guide before you find your way? Inspired by director Ben Ratner’s long friendship with Vancouver actress Babz Chula, Down River tells the story of an older woman named Pearl (Helen Shaver) who guides three younger talents — artist Aki (Ratner’s wife Jennifer Spence), rock singer Harper (Colleen Rennison) and actress Fawn (Gabrielle Miller) –who live in her building. When Pearl unexpectedly leaves their lives, the three are forced to face the future on their own.

Reflecting the gala film's themes, local musicians, writers, digital artists and publishers are invited along with local film and television luminaries, to the BC Spotlight Industry Party after the screening, to forge "new creative connections."