This series had its genesis when I began photographing Vancouver area location shoots last summer to get over a long post-Olympics funk.
Jun 9, 2011 3:03 PM By: Susan Gittins

I first photographed the Underworld vampire/Lycan film franchise at Simon Fraser University in early March when crew transformed Convocation Mall (Convo Mall) into nefarious bio-tech company Antigen with a large grey corporate reception area on the dais and fake Antigen doors at the top of the stairs leading into the Academic Quadrangle. Underworld 4: New Dawn returned there two months later in early May to rebuild the set and this time filmed franchise star Kate Beckinsale as vampire Selene in her signature black leather/latex skin-tight cat suit, not her stunt double.

While I didn't get to see any action scenes I did spot Kate Beckinsale in a North Face jacket and her black catsuit on Convo Mall laughing with her grey-suited co-star Michael Ealy (The Good Wife). Ealy plays a police detective hunting Beckinsale's vampire Selene, who later teams up with her to stop bio-tech company Antigen from “creating super Lycans that will kill them all". The two leads took turns sitting for on-camera interviews on a south walkway above the mall and Ealy is said to have given the camera crew a set tour of Antigen headquarters later that Sunday afternoon.  As @ParrotGirl put it on Twitter: " SFU probably hasn't been this popular since X-Files." 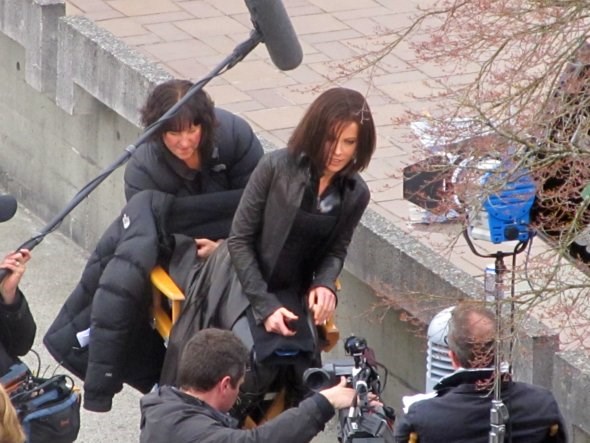 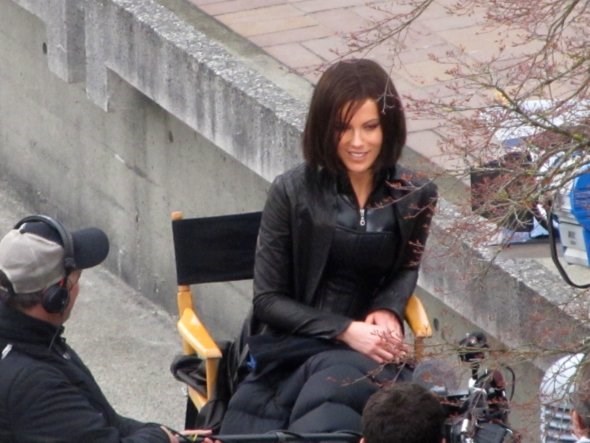 The fourth film in the Underworld franchise wrapped last week in Vancouver after almost three months of shooting here. Swedish director duo Mans Marlind and Bjorn Stein must like concrete slabs because locations ranged from the iconic concrete architecture of Simon Fraser University to scenes below the concrete Georgia Viaduct and many days of filming inside the Coal Harbour Community Centre's concrete parking lot. So much so that when I heard Underworld 4 crew had been spotted at the University of British Columbia I assumed I'd find them at the concrete Buchanan Tower not at a nearby building where they actually filmed (I heard them before I saw them: gathered around a crew tent watching a small screen broadcasting Game 2 of the Vancouver Canucks-San Jose Sharks series) 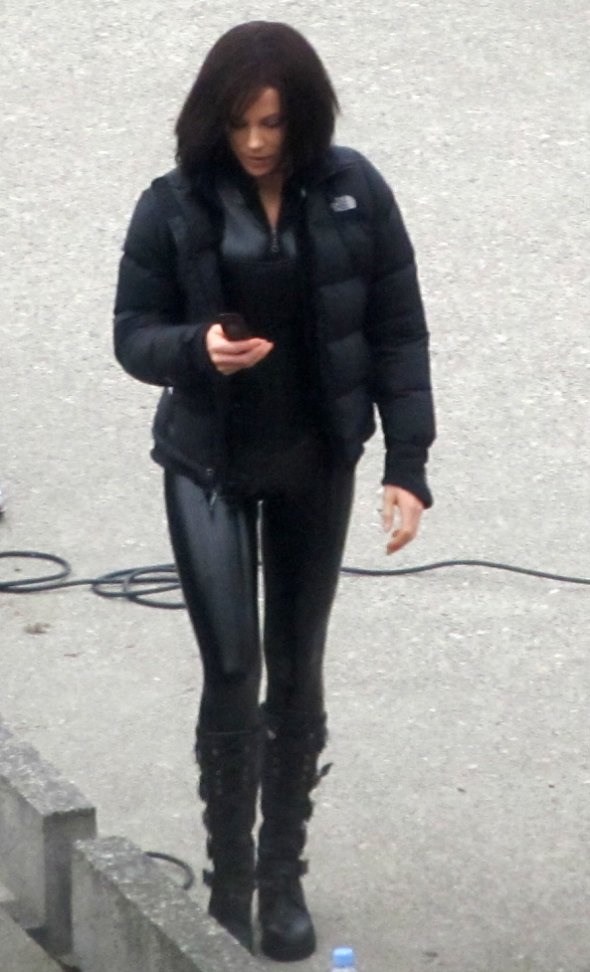 Underworld 4 also made good use of downtown alleys, lighting up one beside the Rogers Building for three nights and another behind Bentall 4. I asked to photograph the other-worldly glow from the Rogers Building alley and was told no photographs allowed. Someone on Twitter complained that she "just got booted off Underworld 4 by an aggressive woman" at the Bentall 4 alley shoot in late April.

Sony Screen Gems put the movie in lockdown from the start, serving copyright infringement notices on photos taken of the public set and practice stunt jumps as well as early filming at SFU. Even the director duo had to comply, scrapping plans for a "Video Diary from Underworld 4" on their blog site and deleting their first entry which had promised "100% uncensored material". If local Flynet agency photographer Justin King hadn't managed to capture a gorgeous Kate Beckinsale in her catsuit and a light-coloured trench coat in an alley beside the Barcelona club in mid-March, film sites would have no scoop ahead of the movie's release apart from casting. India Eisley, who plays Selene's 14-year-old vampire/Lycan hybrid daughter; Stephen Rea and Sandrine Holt, who play Antigen scientists; Michael Ely and Kate Beckinsale were all seen and photographed at the airport or their hotels by local paparazzi. And I saw Ealy on set at SFU at the first shoot. 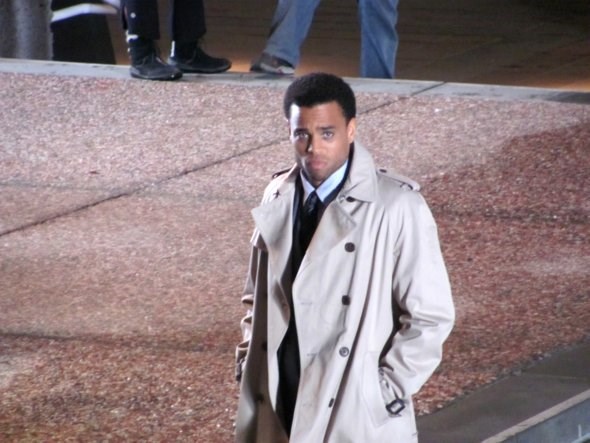 Underworld 4 did have one semi-public shoot at Victory Square at the end of April, with a security checkpoint set up on the west side and lots of extras dressed in SWAT-type uniforms milling about. Lots of tourists with cameras took photos of the scene which didn't appear to feature any cast. Similarly, 2nd unit filming of car-driving scenes seemed open, including one on West Hastings between Burrard and Thurlow late last month, where a Selene photo double fooled some people into thinking they'd just seen Kate Beckinsale in costume. A few days later I happened to see the 2nd unit filming more driving scenes in Stanley Park using a car rig accompanied by a police motorcycle escort. And that was that for Underworld 4 in Vancouver so I feel fortunate to have caught so many scenes at  Simon Fraser University, destined to play a big role in the finished 3D film. 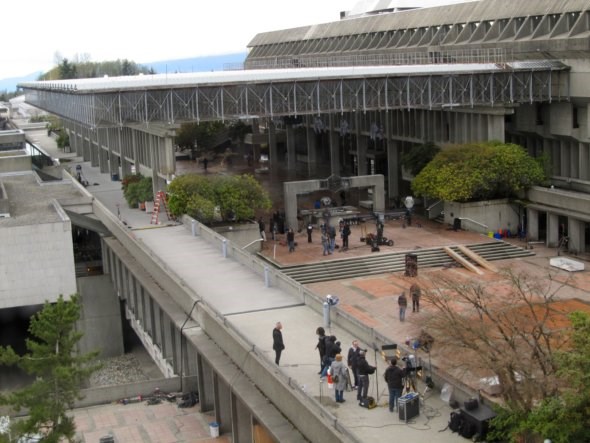 Underworld Awakening is now in post-production and expected to be in theatres in early 2012.