This series had its genesis when I began photographing Vancouver area location shoots in the summer of 2010 to get over a post-Olympics funk.
Susan Gittins Sep 29, 2011 4:32 PM

It's not often in this series that I get an opportunity to talk about movies where Vancouver plays itself but the Vancouver International Film Festival is showcasing 17 locally-filmed features in theatres over the next two weeks.

Four of the most-buzzed-about are Sisters & Brothers, the third in Carl Bessai's trilogy about dysfunctional Vancouver families with real-life friends Cory Monteith and Dustin Milligan as brothers ; mockumentary Sunflower Hour about maladjusted puppeteers vying for a spot on a hit children's show featuring real-life pals Patrick Gilmore and Ben Cotton; dramedy Everything & Everyone about a group of family and friends with Ryan Robbins's naked torso in the teaser; and Donovan's Echo with Danny Glover as a man who returns to his family home 30 years after a tragic accident in a movie produced by veteran Canadian actor Bruce Greenwood.

I met and chatted with some of the filmmakers and cast earlier this month at a VIFF media conference but didn't get to see any of the filming here, mostly because the low budgets meant shooting is done mainly on weekends with a limited crew. The Sunflower Hour writer/producer/director Aaron Houston told me it took  eight weekends, sixteen days of filming, seventeen locations and thirty-four actors to make his caustic and  reportedly very funny Spinal Tap homage. Eveything and Everyone took only 12 days in Maple Ridge and Alouette Lake; Donovan's Echo filmed last November in Fort Langley. So I've made an exception in this series and used the VIFF handouts below to illustrate the films not my own photographs. From top to bottom: bearded Dustin Milligan and Cory Monteith as brothers in Sisters & Brothers; bad-ass Irish puppeteer Ben Cotton and his smoking puppet in Sunflower Hour; Gabrielle Rose and her newly-discovered grandson  in Everything & Everyone; and Danny Glover in spooky blue on a bridge in Donovan's Echo. 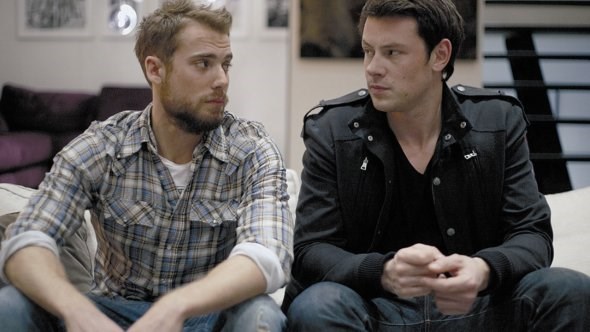 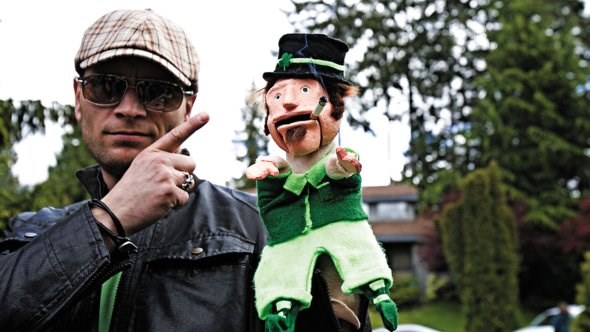 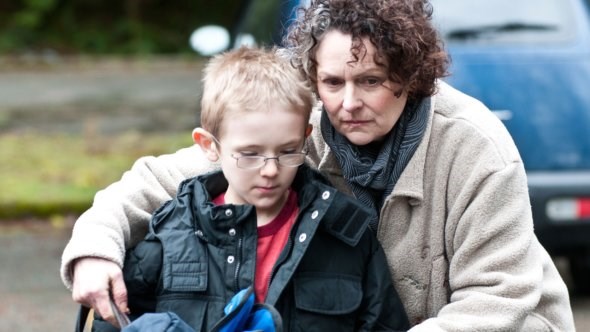 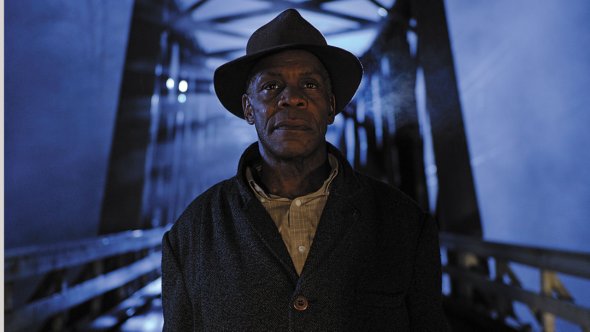 Low budgets don't have to limit these films when it comes to promotion though. Vancouver filmmakers are as savvy about social media as anyone in this city. The Sunflower Hour and Donovan's  Echo boast websites, YouTube trailers, facebook pages and Twitter accounts. Everything & Everyone has a teaser on You Tube and a facebook page. Sisters & Brothers has a facebook page and currently rules Twitter thanks to Glee star Cory Monteith's 800,000+ Gleek followers. Almost everyone involved in that film has a Twitter account including @SisBroFilm and director @CarlBessai.

Sisters & Brothers, which premiered at the Toronto International Film Festival on September 11th,  screens at VIFF on October 5th and 11th  in the Visa Screening Room at the Vogue Theatre. Despite their star billing, Cory Monteith and Dustin Milligan only did one day of participatory filming here as one of the movie's four sibling pairs,with Monteith as a famous movie star and Milligan as his not-famous brother. Other featured pairings include Corner Gas's Gabrielle Miller and Shattered's Camille Sullivan as sisters (but not each other"s) and you will recognize lots of local talent like Gabrielle Rose in this hand-held, collaboratively filmed feature.

I looked for director Carl Bessai at the VIFF media conference but he'd already left for Toronto to prep for the premiere with all the hoopla that a TIFF launch entails. LA-based Cory Monteith and Dustin Milligan didn't show either, but kindly re-tweeted my Sisters & Brothers tweet that day, no doubt contributing to my latest Klout perk. It seems the entire cast travelled to TIFF for the premiere to do press, attend the screening and mingle at the after-party. Monteith and Milligan told and retold the story of their early days working together in a Vancouver cake shop. And @SisBrofilms sponsered an impromptu contest to give local fans a chance to attend. Photos of the cast and tweets from the cast flooded my timeline that weekend. My favourite had to be Dustin Milligan (my photo of him in secret agent-mode below) 's tweet about getting beat-up girl-style by his co-star Camille Sullivan (my photograph of her in blue halter below) and stumbling back from his first TIFF afterparty. 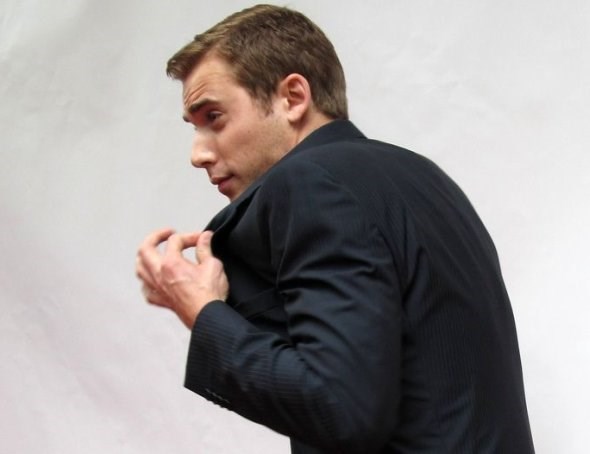 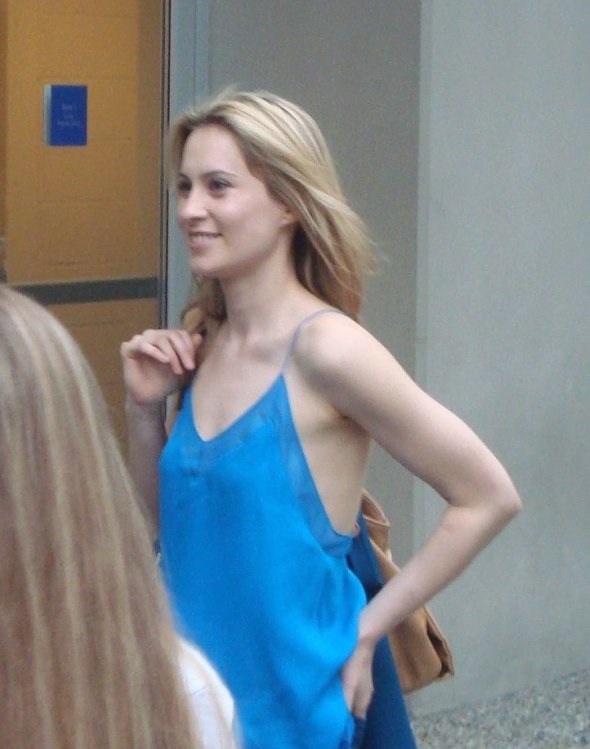 Sunflower Hour, already making the rounds of film festivals, screens at VIFF on October 13th and 14th in the Empire Granville 7 theatres. Its tagline says it all: Mockmentary Movie or Documentary TV? Whatever it is, Sunflower Hour is not for Kids! It sure isn't. A clip in the trailer demonstrates something dubbed "Puppet Pleasure". I met director Aaron Houston and most of the main cast at the VIFF media conference and talked with wickedly-funny Patrick Gilmore about his recent Dragon-Con experience being carried onto the stage by one of his SGU Stargate Universe co-stars and about his deliciously-debauched scene in The Killing as a  rich dick billionaire in a stuffed speedo with call girls swimming above his head in the ceiling lap pool at the Keefer Hotel.

By contrast, Sunflower Hour is said to have filmed in Vancouver's blandest hotel and least posh suburbs and Patrick Gilmore is a homophobic preacher's son not a sleazy billionaire. I laughed the moment I saw the official poster with Gilmore's curls (see photo below) slicked down like a kid's as one of the four puppeteer finalists being followed by the reality-TV crew. Fellow puppeteer finalist Amitai Marmorstein told me Gilmore kept cracking him up during filming and ruining takes. 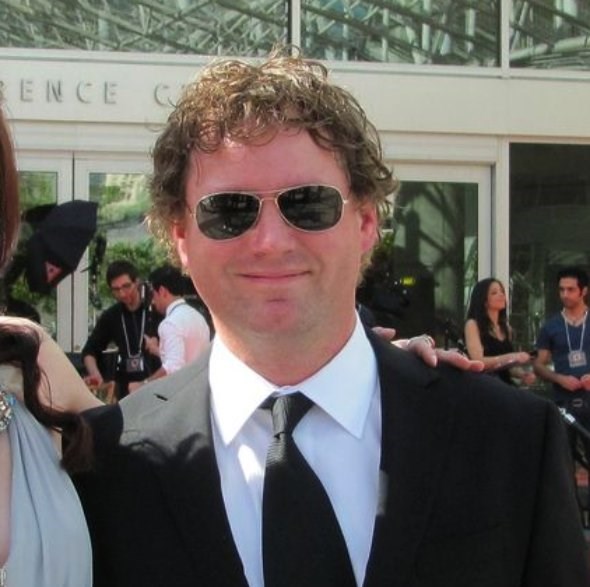 Patrick Gilmore, Ben Cotton, who's best-known for Harper's Island and hopefully the latest prequel to Battlestar Galactica, and Amitai Marmorstein  travelled to a Quebec City film festival screening for Sunflower Hour, tweeting about being treated to rounds of drinks until 3 a.m. and poutine until 4 a.m. while way-out-of-their-league girls flirted with them. Sunflower Hour also screens at the Calgary Film Festival so we can look forward to more tweets about their adventures.

Everything & Everyone gets its world premiere at VIFF on October 12th at the Empire Granville 7 theatres, with a second screening the next day. I talked with director Tracy D. Smith and actor Gabrielle Rose at the VIFF media conference but lead actor Ryan Robbins from Sanctuary (my photo below) couldn't attend because he was filming yet another movie unlike his Everything & Everyone character --  a failed actor who lives with his Mom played by Rose. She is quietly coping with the onset of dementia. Then social services drops off her son's newly-discovered school-age son and this generational tale of aging and loss, love and laughter is complete. 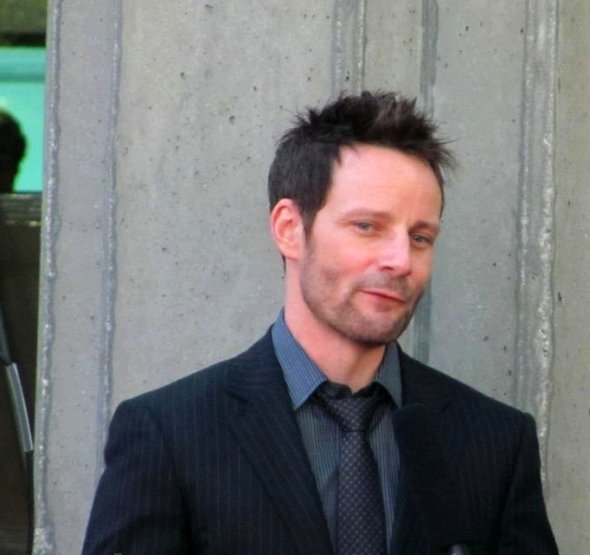 Donovan's Echo screens at VIFF on October 9th and 11th in the Empire Granville 7 theatres. It's about a brilliant mathematician Donovan Matheson, played by Danny Glover, who tries to make sense of a bizarre series of events that repeat on the 30th anniversary of a personal tragedy. Is it deja-vu or is there a logical explanation? Director Jim Cliffe told me there are supernatural elements to the story of Glover's character trying to save another family from a similar fate or as the movie's tagline puts it: Can his past save her from the future? Bruce Greenwood not only co-stars, he produces the film.

Gabrille Rose has to be the busiest actor at VIFF. Her third film in the festival is The Protector, a horror short about the dangers of seeking refuge in a 1940s doctor's office. Rose explained its genesis in the weekend Blood Shots Challenge. Director Brianne Nord-Stewart and  the writer brainstormed with the cast on a Friday night, then wrote the script overnight, filmed Saturday, edited Sunday, submitted Sunday night and won the challenge. 48 hours without sleep for them but only a day's filming for Rose and the rest of the cast. The Protector is part of the Air series at VIFF. 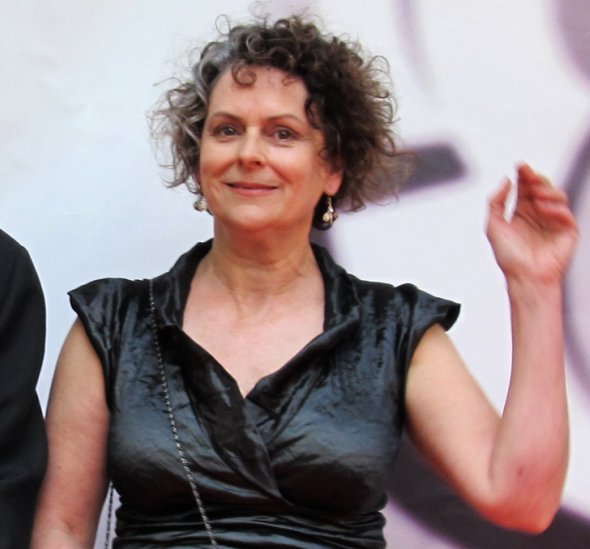 None of these Vancouver films is the Canadian Images Opening Gala tomorrow night. That honour belongs to Sarah Polley's  Take This Waltz, featuring Michelle Williams in the unbearable humid heat of a Toronto summer. I can attest that summer in TO can be like  inhaling dirty soup and plan to attend the screening.

Update: Corrected screening times for Sunflower Hour, which is a good thing because it proved to be a big success at VIFF, earning the award for Best Ensemble Cast.