In the fourth year of this series, expect me to interview filmmakers and write about and photograph the current film and TV productions -- Fifty Shades of Grey, Supernatural, Once Upon a Time, Arrow, Bates Motel, The Flash and our own Continuum, Moti
0
Jun 26, 2014 5:30 PM By: Susan Gittins 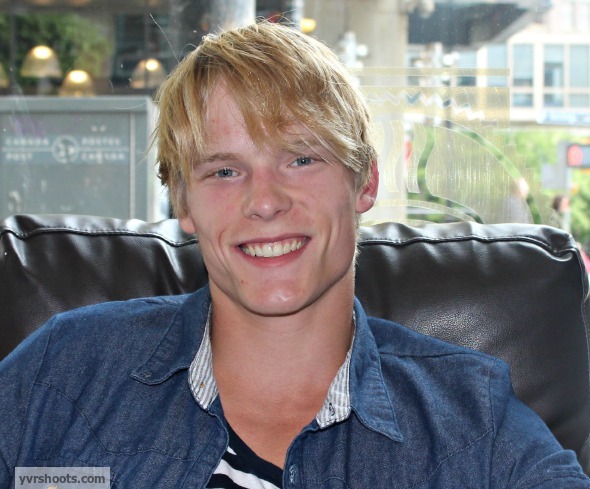 Tonight he makes his debut in the Canadian premiere of the fourth season of alien invasion series Falling Skies on Super Channel, but not as one of the good guys. His character Kent runs a Hitler Youth-style camp -- filmed at Coquitlam's Riverview Hospital -- which brainwashes kids into thinking that the aliens are on Earth for peaceful reasons not to wipe out humanity. Somehow the youngest Mason (Maxim Knight) ends up in his program after 2nd Mass -- the small band of resistance fighters who've rebelled against the occupying alien force for three seasons -- are separated. Matt Mason (Knight) pretends to go along with the re-education for a while until something happens. Daulby couldn't say what except to add how much he enjoyed working with Knight and his briefer interactions with Noah Wyle who plays Matt's father Tom Mason, the de-facto leader of 2nd Mass. The only negative about Daulby's role: Riverview Hospital gets pretty spooky at night and this Vancouver-born actor's not keen on ghosts.

Look for Dakota Daulby in theatres later this year as the lead in upcoming horror thriller Black Fly, which has been touted as Canada's Winter's Bone. His character Jake Henson is a troubled teen haunted by the death of his parents -- the father in a hunting accident and mother by suicide -- who escapes an abusive uncle to reconnect with his older brother Noel, living with his girlfriend in a farmhouse on an isolated Island on the BC coast. The drama unfolds as it becomes clear that Jake has gone from bad to worse, since Noel is a heavy drinker with a hair-trigger temper and there's no escape from his rampage. It's hard to believe this story is inspired by director Jason Bourque's own experiences. Shot in the Vancouver area and on Hornby Island, the filmmaker plans to premiere his feature at the Toronto International Film Festival this year.

In contrast to two dark characters, Dakota Daulby's other big role this year is as good guy Drew in Ana Valine's mother-and-daughter con movie Sitting on the Edge of Marlene. Adapted from the Billie Livingston novella, the feature film  is about teenager Sammie Bell (Paloma Kwiatkowski) who's drawn into the family con business by her messed-up mother Marlene (Suzanne Clément). Daulby's religious Drew tries to help Sammie and the two co-stars bonded enough to walk the red carpet together at the Leo Awards at the beginning of June and to cheer Valine as she won the Leo for Best Directing of a Motion Picture. This BC film is expected to make its debut at the Toronto International Film Festival too.

So yes, a very good year for Dakota Daulby.