In the third year of this series, expect me to write about and photograph the current film and TV productions -- Tomorrowland, Once Upon a Time, Arrow, Supernatural, Bates Motel, Almost Human, Once Upon a Time in Wonderland and our own Arctic Air and
Sep 19, 2013 1:58 PM By: Susan Gittins

Vote for whichever BC film or documentary you want to see at a red carpet screening of the Vancouver International Film Festival which screens from September 26th to October 11th. It's a new feature of this year's BC Spotlight program, with a dozen made-in-BC projects vying for the honour. Check out mustseeBC to preview, promote and vote until next Thursday's deadline. And tweet on the hash tag #mustseeBC.

THREE DRAMAS: thriller 3 DAYS IN HAVANA and  realist CINEMANOVELS and DOWN RIVER.

How does Jack Petty (Gil Bellows), on a seemingly routine business trip to a conference in Havana, Cuba, become involved in an assassination conspiracy with his new Brit friend Harry Smith (Greg Wise)? Co-directed by Gil Bellows and Tony Pantages,  3 DAYS IN HAVANA is a Hitchcockian thriller populated by untrustworthy characters like Anders (Christopher Heyerdahl) from the Canadian Consulate, mob boss Francis Liddy (John Cassini)  and the broker (Phyllida Law). Somehow Petty must outwit them all.

What happens when you lose your guide before you find your way? Inspired by director Ben Ratner’s long friendship with Vancouver actress Babz Chula, DOWN RIVER River tells the story of an older woman named Pearl (Helen Shaver) who guides three younger talents — artist Aki (Ratner’s wife Jennifer Spence), rock singer Harper (Colleen Rennison) and actress Fawn (Gabrielle Miller) –who live in her building. When Pearl unexpectedly leaves their lives, the three are forced to face the future on their own.

“There will be tears. There will be drama.  And …..jazz hands.”  How could a film about teens competing in a community dance competition called LEAP 4 YOUR LIFE be anything but a mockumentary? Be prepared to laugh at the backstage antics of stage parents with their teen contestant offspring and be awed by the dancing. April Telek is the contest coordinator and 23-year-old Taylor Hill is the triple threat: writing, producing and starring in her own film directed by Gary Hawes.

"Love Hurts." How do you sell a  romantic comedy about the least romantic thing possible? Vancouver director Jason James lined up an all-star cast led by Paul Costenza (Royal Pains, Vancouver indie Everything’s Gone Green) as charming womanizer Adam Murphy, a guy with just about everything who wakes up one morning with the one thing nobody wants — THAT BURNING FEELING. John Cho (Harold & Kumar, Star Trek’s Sulu) is Adam’s boss and Tyler Labine (Tucker&Dale vs Evil, Rise of the Planet of the Apes) is Adam’s best friend. Now Adam has to tell all of his recent sexual conquests about that burning feeling. Is this any time for him to meet the woman of his dreams (Chelsea Lately’s Ingrid Haas)? “Comedy is a hard thing to do well,” director Jason James explains, who likes to set his characters in the ” real world, grounded and honest” and then find the comedy in the situations. Like a womanizer with an STD who falls in love?

“Broadcasting is a Contact Sport.” Vancouver filmmaker Bruce Sweeney’s latest film THE DICK KNOST SHOW is about a shock jock talk radio host (Tom Scholte) who loves Don Cherry-style Rock ‘Em Sock ‘Em hockey and hates less violent sports like soccer. But the motormouth goes too far with a controversial tweet about hockey concussions which draws the ire of his network bosses. And then Knost is concussed himself and his team–  co-host Neill (Paul Skrudland), a heavily concussed, ex-pro hockey player obsessed with Paulina Gretzky and producer Kelly (Gabrielle Rose), a quick-witted no-BS manager who will-do-anything-to-save-her-career — have to scramble to save the show.

Babz Chula not only serves as the inspiration for Ben Ratner’s film DOWN RIVER, she’s also the subject of Anne Wheeler’s documentary CHI, which follows the Vancouver actress to Kerela, India, where she hopes to find a cure for her 6-year battle with cancer. At first Chula improves under the Ayurvedic healer’s care but discovers on returning home that her cancer has advanced not retreated. 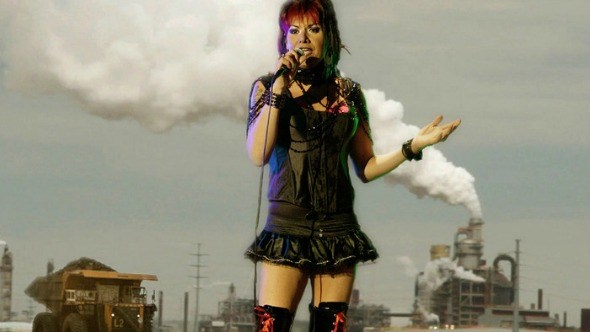 Vancouver director Charles Wilkinson wasn’t prepared for just how hot his documentary OIL SANDS KAROKE would be at this year’s Hot Docs International Documentary Film Festival in Toronto. “The press was unbelievable….and the screenings sold out.”  But even more gratifying was its reception at a special presentation in Fort McMurray, Alberta, where his oil sands karaoke stars work and live. How did one doc manage to be popular in two such disparate places? Wilkinson says he has a “pretty clear point of view that climate change is ruinous” to the planet but also respects that people need to work. And oil sands work is especially tough, done in inhospitable physical conditions over long shifts, although it pays well and supports its workers’ families.
You can vote until September 26th at mustseeBC.viff.org