This series had its genesis when I began photographing Vancouver area location shoots last summer to get over a long post-Olympics funk.
Susan Gittins Jul 21, 2011 1:45 PM

How's this for Comic-Con craziness? Twihards starting lining up outside the San Diego Convention Center three days early (on Monday,) to be among the six thousand lucky enough to get into The Twilight Saga: Breaking Dawn 1 panel in Hall H, which took place just before lunchtime today. First thing so that Twihards couldn't ruin Comic-Con like they usually do. What's even more crazy? That the vampires and werewolves of the mainly Vancouver-shot Breaking Dawn 1 aren't the most popular panel of the hundreds at Comic-Con 2011. Not even close. That honour belongs to the zombies of AMC TV series The Walking Dead.

Breaking Dawn 1 isn't even among the most popular of Vancouver-filmed movies and TV series at Comic-Con, which has become less about big movies and more about cult television series in recent years. Locally-shot TV series Pscyh cracked the Top 25 most popular panels and  Fringe, Eureka, Supernatural and Alcatraz are all in the Top 50. Breaking Dawn 1 and Underworld Awakening (the fourth in the movie franchise but only the third to star Kate Beckinsale and her vampire cat suit) barely made the Top 50 cut. 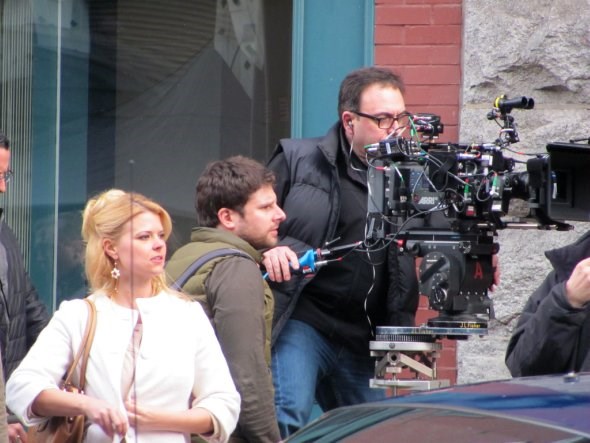 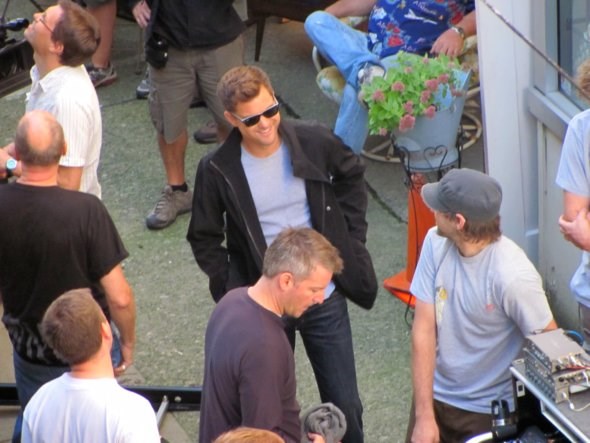 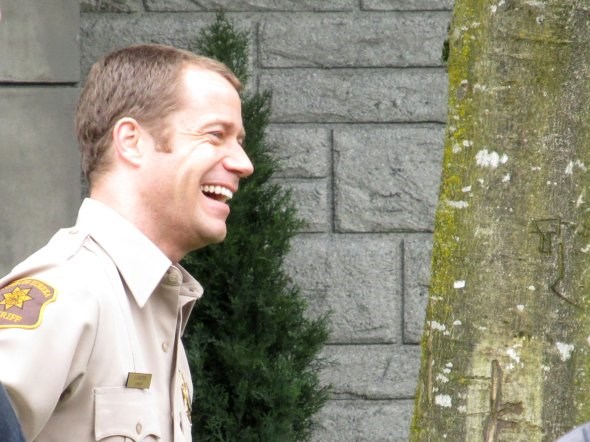 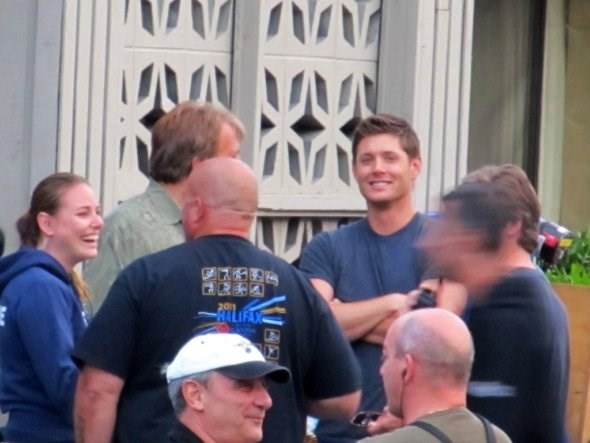 Psych presented today to standing-room-only, people-turned-away capacity, with Psych-os either dressed as pineapples or carrying them. Apparently series star James Roday (seen above directing a vampire-themed episode) improvised with a pineapple in the show's premiere and there's been one hidden in every episode since. Nominally a detective series, Psych knows how to play to a Comic-Con crowd, with several episodes in its sixth season (now filming in Vancouver) crossing over into genre stuff  like vampires, super heroes and Star Trek. In a real casting coup, the original Captain Kirk   -- William Shatner -- plays the father of one of the main cast in an episode filmed during the Stanley Cup Final games (Shatner was in Rogers Arena and got caught in the riot afterwards).

Friday night hit Fringe, which left its fans with a cliffhanger last season when main character Peter Bishop simply ceased to exist, presents Saturday. FOX is promoting upcoming season 4 with a sublimal teaser which spells out Where is Peter Bishop? backwards, so it makes sense that the actor who plays him -- our own Joshua Jackson -- will be the only member of the main cast not at the Fringe panel. Jackson (seen above laughing with crew) remains under contract so it's likely he's here in the city this week filming the season opener in the old Terminal City Ironworks compound in east Vancouver where the two parallel universes overlapped in last season's twisty finale. Props crew were inside for several days but what they built and what Fringe is filming remains a secret, as does almost everything about the premiere, except that it's big (Fringe filmed a couple of Observers on set).

Compared to Fringe, Syfy series Eureka goes largely unnoticed filming here but its Comic-Con profile is roughly the same. Not bad for a little show that bills its Friday presentation as "Small town. Big Panel". Most of the main cast are flying down today after filming in downtown Chilliwack yesterday led by Eureka sheriff, good sport and wacky tweeter Colin Ferguson (shown above laughing after doing a stunt). Eureka upped its sci-fi cred by promising geek goddess Felicia Day (who plays one of the show's off-the-wall scientists) on a panel moderated by occasional series guest star Whil Wheaton (Star Trek: The Next Generation alumnus and Sheldon's nemesis on The Big Bang Theory).

Supernatural presents on Sunday with series star Jensen Ackles expected to give the audience a sneak peek of the season seven episode he directed last week mainly on the North Shore. Co-star Jared Padalecki will also be flying down to San Diego, as will Misha Collins,  the show's new and apparently bad-ass God. It promises to be a raucous Q & A with fans because Collins is no longer a series regular and judging from photographs taken of him yesterday in the Spanish Banks area as his raincoat-wearing character Castiel standing over the bodies of slain angels, he's going out in epic style.

JJ Abram's new series Alcatraz also made the Top 50 of Comic-Con with a Saturday panel where the mainly Vancouver-shot pilot will be screened again (after a sneak peek last night) but this time actors Sarah Jones and Jorge Garcia (Lost's loveable Hurley) will be on hand to answer questions.  Filming of the first season doesn't resume here until mid-August as Alcatraz is one of FOX's mid-season shows.

Also on Saturday is the panel for locally-filmed but rarely-seen-outside-of-studio TV series Sanctuary. It's known for its revolutionary greenscreen filming, but series stars Amanda Tapping and Robin Dunne do plan to be at Comic-Con live and in person to represent Vancouver's  only all-Canadian show at the annual geekfest. 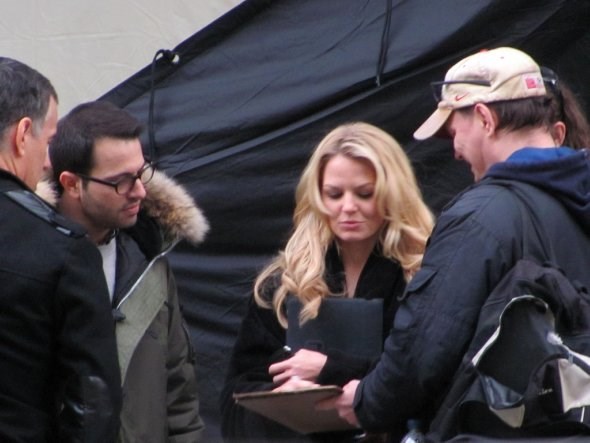 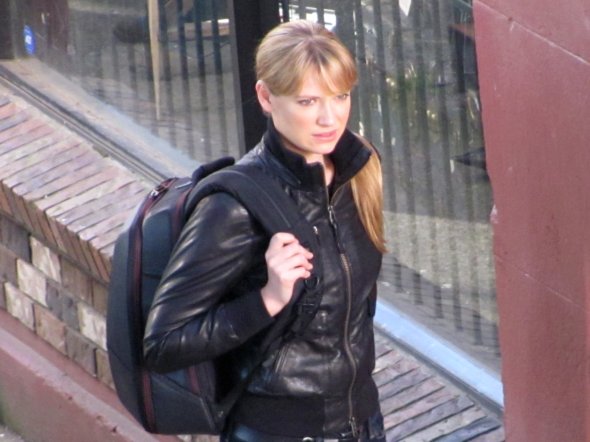 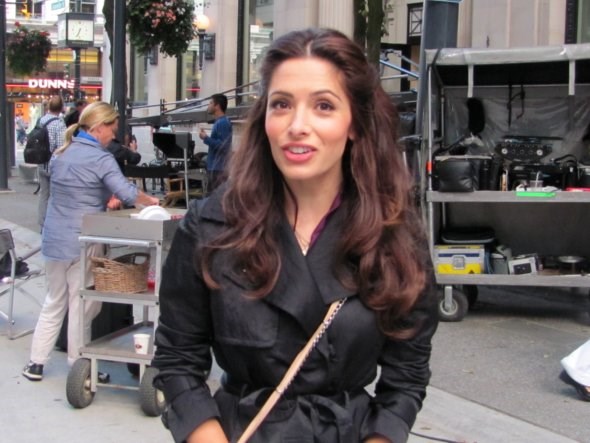 Other new series presenting at Comic-Con (ones that didn't make the Top 50) are ABC's modern fairy tale Once Upon a Time and The CW's coven-of-witches show The Secret Circle, both of which started filming their first seasons here on Tuesday (Once Upon a Time at Kerrisdale School).  Their lead female faces Jennifer Morrison of Once Upon a Time (shown above signing autographs at The Shore Club during the filming of the pilot) and Britt Roberson of The Secret Circle, along with the multiple-character-playing Anna Torv of Fringe (shown above as her alternate universe character Fauxlivia), are featured in The Hollywood Reporter's "Comic-Con: TV's 6 Most Wanted Women".  In the round-table discussion Torv acknowledged the importance of Twitter to genre shows and briefly mentioned her own experience of tweeting using the account of one of the show's executive producers (fans created multiple hashtags in her honour that day).

Non-genre shows generally don't bother with Comic-Con and it doesn't bother with them so Fairly Legal and The Killing are two locally-filmed series which were not expected to have a panel or cast in San Diego. But it turns out Fairly Legal star Sarah Shahi (seen above on Granville Street) wasn't going to pass up this opportunity to connect with her many fan-boys and fan-girls. Over the next four days, the San Diego Convention Center is definitely the place to find them.