Amid protests, Trump talks of war - and reelection

WASHINGTON — Embracing the language of confrontation and war, President Donald Trump on Monday declared himself the “president of law and order” and signalled he would stake his reelection on convincing voters his forceful approach, including deployi
Jun 1, 2020 8:05 PM By: Canadian Press 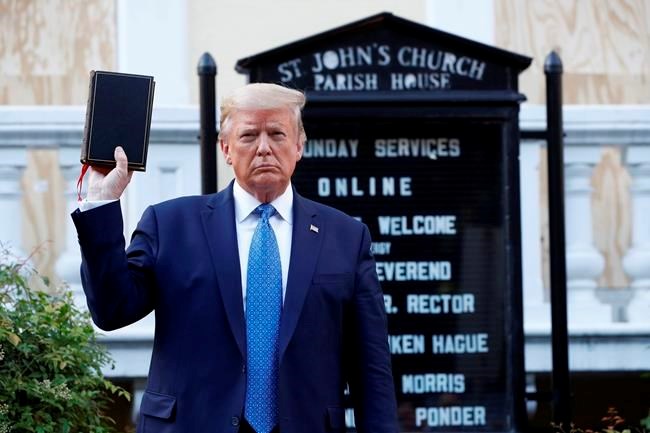 WASHINGTON — Embracing the language of confrontation and war, President Donald Trump on Monday declared himself the “president of law and order” and he would stake his reelection on convincing voters his forceful approach, including deploying U.S. troops to U.S. cities, was warranted in a time of national tumult and racial unrest.

Trump made his Rose Garden declaration to the sound of tear gas and rubber bullets clearing peaceful protesters from the park in front of the White House. It created a split screen for the ages, with his critics saying the president was deepening divisions at a time when leadership was crucial to help unify a fractured country.

The president’s forceful turn to a partisan posture was reminiscent of the us-vs.-them rhetoric he has often used when under pressure, including in the face of the coronavirus pandemic. He has responded to the violence with a string of polarizing tweets, one starkly laying out the political stakes by underscoring the approach of Election Day.

Trump vowed to deploy the U.S. military to America’s own cities to quell a rise of violent protests, including ransacking stores and burning police cars. He offered little recognition of the anger coursing through the country as he demanded a harsher crackdown on the mayhem that has erupted following the death of George Floyd.

Floyd died after a white Minneapolis police officer pinned him down and pressed his neck with his knee as the man pleaded that he couldn’t breathe. Violent demonstrations have raged in dozens of cities across the nation, marking a level of widespread turmoil unseen for decades.

The political ground beneath Trump has greatly shifted in the spring of this election year. He was supposed to be running on a strong economy, but now he’s facing a pandemic, an economic collapse and civil unrest not seen since the 1960s.

Indeed, some around the president likened the moment to 1968, when Richard Nixon ran as the law-and-order candidate in the aftermath of a summer of riots and captured the White House. But Trump is the incumbent and, despite his efforts to portray himself as a political outsider, he risks being held responsible for the violence.

Trump emerged after two days out of public view in the White House to threaten to deploy “thousands and thousands” of U.S. troops. Then he made a surprise walk through Lafayette Park to a Washington house of worship known as “The Church of the Presidents” that suffered fire damage in the protests.

“The president just used a Bible and one of the churches of my diocese as a backdrop for a message antithetical to the teachings of Jesus and everything that our church stands for," she said. But he had his campaign moment.

“You have to dominate” and “if you don’t dominate you’re wasting your time,” Trump said, demanding the protests be swiftly crushed, even as some warned that such an aggressive law enforcement response could lead to an escalation of violence.

The president urged governors to make more use of the National Guard, which he credited for helping calm the situation Sunday night in Minneapolis. He demanded that similarly tough measures be taken in cities that also experienced spasms of violence, including New York, Philadelphia and Los Angeles.

Trump’s exhortations came after a night of escalating violence, with images of chaos overshadowing largely peaceful protests. The disturbances grew so heated Friday night that the Secret Service rushed the president to an underground White House bunker previously used during terrorist attacks.

Some West Wing officials and political advisers have acknowledged that some of the president’s tweets have not been helpful, and they have been pushing Trump to acknowledge the pain of the peaceful protesters without lumping them in with the agitators he says are responsible for the violence.

But another faction within the administration, including longtime law-and-order proponent Attorney General William Barr, has encouraged Trump’s instincts to focus on the group violence. The hope is such a posture can help Trump draw a contrast with Democrats who have been less vocal in their condemnation of the unrest.

The West Wing had been mostly empty over the weekend. Many staffers were told to stay home to avoid the protests, chief of staff Mark Meadows was out of town celebrating his daughter’s wedding and senior adviser Jared Kushner was marking a Jewish holiday.

Among the options being discussed in the White House: a new criminal justice reform package, a task force that would include Housing and Urban Development Secretary Ben Carson and a listening tour of African American communities, according to people familiar with the discussions who spoke on condition of anonymity because nothing had been finalized.

Democrats hammered Trump, accusing him of stirring the unrest.

“Hate just hides. It doesn’t go away, and when you have somebody in power who breathes oxygen into the hate under the rocks, it comes out from under the rocks,” said the party’s presumptive presidential nominee, former Joe Biden, speaking at a church in Wilmington, Delaware.

Senate Minority Leader Chuck Schumer said Trump “struggles to summon even an ounce of humanity in this time of turmoil.”

“The president has reacted to the pain and anger in the country by playing politics and encouraging police to be tougher on protesters by bragging about his reelection prospects and his personal safety inside the White House,” Schumer said.

Long drawn to displays of strength, Trump and his advisers believe that the combative rhetoric and promises to send the military into cities will reassure voters, including senior citizens and suburban women, concerned by the lawlessness.

Eager to change the narrative of the election, just five months away, from a referendum on his handling of the coronavirus pandemic, Trump and his aides see a cultural war issue that could captivate his base.

Ralph Reed, chairman of the Faith & Freedom Coalition and a close ally of the president, said, “In the same way that he became the unlikeliest of champions for evangelicals and the faith community, he has it in him to do the same thing for the minority community.”

Much as he has with the pandemic, Trump has tried to scapegoat the nation’s Democratic governors and mayors, much to their dismay.

During the teleconference, Illinois Gov. J.B. Pritzker bluntly told Trump that “the rhetoric that’s coming out of the White House is making it worse.”