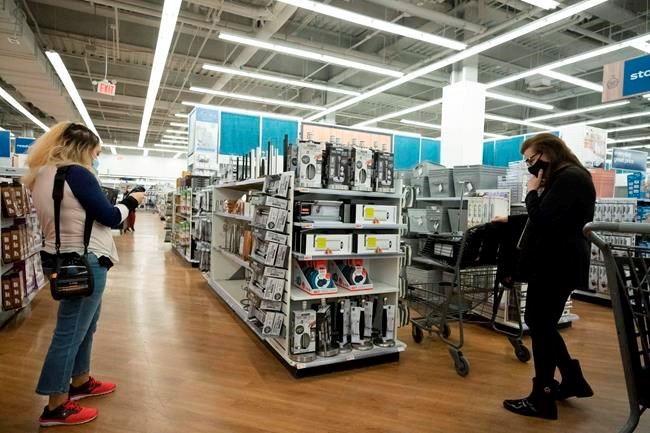 WASHINGTON — U.S. consumer prices increased a sharp 0.6% in March, the biggest uptick since 2012, while inflation over the past year jumped 2.6%. The big gains had been anticipated and are largely expected to be a temporary blip rather than a reawakening of long dormant inflation.

The increase in the Labor Department's consumer price index Tuesday followed a 0.4% increase in February and was the biggest one-month gain since a 0.6% bump in August 2012.

The year-over-year increase was far greater than the 1.7% increase for the 12-month change the previous month and while it easily exceeded the Federal Reserve's 2% target for inflation, the 2.6% increase in March was more of a snapshot of a period of time last year when prices tumbled as much of the world went into a pandemic lockdown.

The Fed a year ago slashed its key interest rate to near zero and has that it does not plan to start increasing interest rates until it sees a sustained rise in inflation above its 2% target. Currently, the expectation is that the Fed's first rate hikes will not occur until after 2023.

To ward off turbulence in financial markets over fears of rising interest rates, Fed Chairman Jerome Powell has for weeks cautioned that inflation figures will rise this spring, but that the increase would be temporary.

Economists call the March jump a base effect due to those plunging prices at the start of the pandemic. The phenomenon can make inflation appear worse than it is at first glance.

For example, the 2.6% March jump looks out of whack compared with core inflation, which excludes volatile food and energy. That was up a more moderate 1.6% over the past 12 months, compared to a 1.3% 12-month increase in February.

For March, energy prices increased a sharp 5% led by a 9.1% jump in gasoline prices. The gasoline surge accounted for nearly half of the monthly price gain. AAA reports that the nationwide average for gasoline stands at $2.86 a gallon, up from $1.86 a year ago.

Economists said they expected further price gains in coming months as the country continues to open up, but believe the Fed will continue to see those gains as temporary.

“The surge in inflation in March is the first meaningful wave of several that will cumulatively lift inflation in the coming months to a level not seen in many years,” said Jim Baird, chief investment officer for Plante Moran Financial Advisors. “Even so, the coming surge shouldn't be a cause for alarm.”

Rubeela Farooqi, chief U.S. economist at High Frequency Economics, said that price pressures will build further over the net few months reflecting a variety of factors including supply chain restraints and stronger demand as economic activity resumes. But she said the Fed will see view these prices increases as transitory and “not expected to be sustained.”

The report Tuesday showed that new vehicle prices were unchanged in March and up 1.7% over the past year while used car prices rose 0.5% and are 9.4% higher than a year ago