Desk shortage forces people to get creative about workspaces 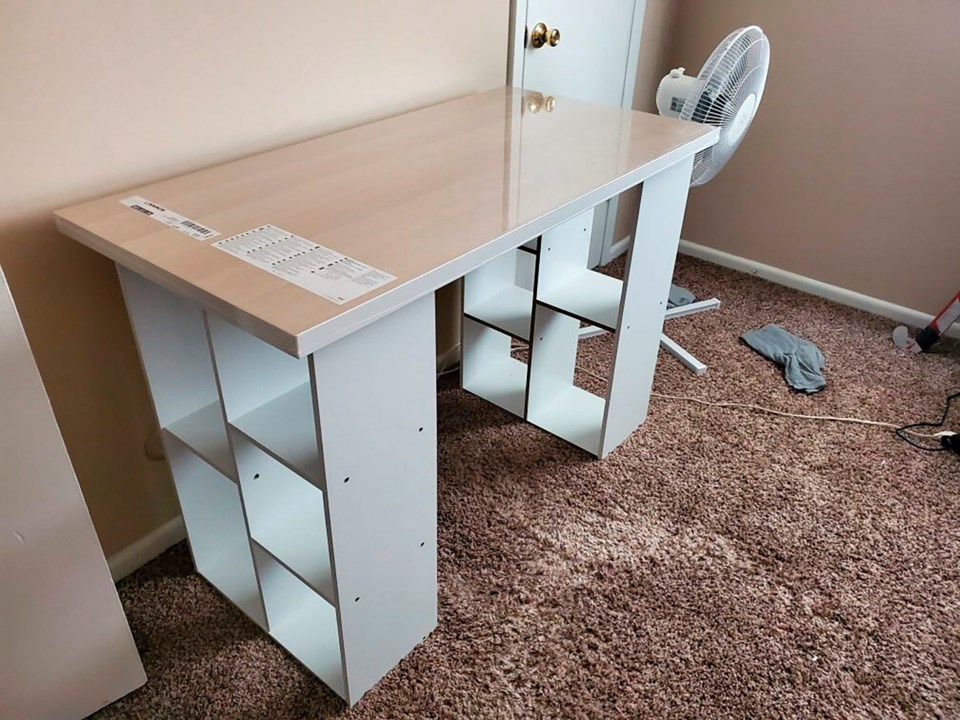 NEW YORK — First it was toilet paper. Disinfectant wipes. Beans. Coins. Computers. Now, desks are in short supply because of the coronavirus pandemic.

Millions of kids logging onto virtual school this fall has parents scrambling to find furniture for them. It’s a small indignity compared with the kids who don’t even have home internet or computers, but it’s a hassle for parents lucky enough to have the space and money to afford desks just the same.

At the same time, some people are realizing they'll be working from home for the long haul and require new furniture. To find desks, people are scouring stores near and far and even making their own.

Elizabeth Rossmiller, a teacher working from home for the first time, needed to upgrade from her temporary setup: an upside-down laundry basket on a nightstand.

The desk she wanted from Amazon was out of stock. None were available for under $200 at Target or Walmart. Her husband found a floor model at a store 45 minutes away from their home in Gresham, Oregon.

It was smaller and more dinged up than she expected, but “better than a laundry basket!"

Target and Ikea are restocking home office supplies due to high demand. Amazon and Walmart did not respond to requests for comment. But John Furner, who runs Walmart’s U.S. stores, acknowledged low stocks of kid’s desks and laptops in a ABC News interview on Sept. 11.

Online, sales of desks and accessories, such as desk chairs and lamps, were up 283% in August from the year before, according to Rakuten Intelligence, which tracks shopper . Sites that offer used goods show spiking interest: On Facebook Marketplace, interest in desks has doubled in the last month from the month before. But prices aren't necessarily cheap.

Shaynah Dungan, who needs a desk for when she starts esthetician school in January, said desks similar to the sold-out one she wants from Ikea were overpriced on Amazon and OfferUp, an app where people sell their stuff.

People are figuring out other solutions, sharing advice on turning dressers or book shelves into makeshift desks on Pinterest and Facebook.

Megan Fry, who is starting a new work-from-home customer service job in Indianapolis in October, said she had to go the “DIY route” after visits to Walmart, Ikea and other stores found no desk options under $150. She made her own using a $30 legless tabletop from Ikea placed on top of two short bookcases from Amazon, which cost $42 apiece.

“It’s not as cute or trendy as a bought desk and I wish it had drawers for storage,” said Fry. “But I’m happy it’s clean and has a large surface on top for my monitors and laptop.”

Instead of bookcases, Patrick Brugh went with crates to build a desk for his 6-year-old after he couldn’t find a desk at Ikea or Amazon. The Baltimore university administrator built it in two days, spending about $70 at Home Depot on four crates and a board that he painted in bright blue.

Will the homemade desk make it through the school year?

“There’s goo on the top from his snack,” said Brugh, whose son spends about 40 hours a week on it for virtual classes. “I could not believe in three weeks how much damage he’s done to this desk.”