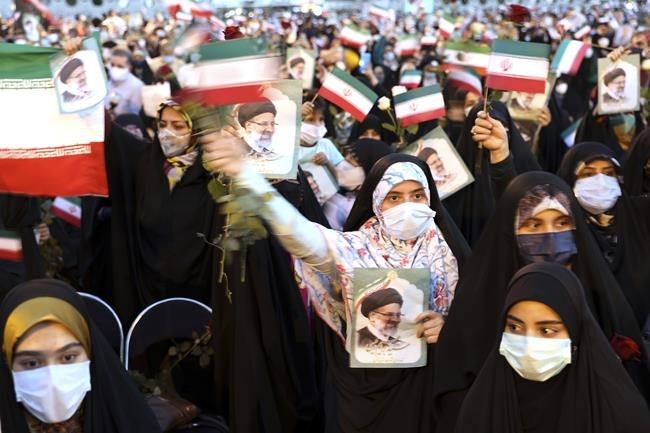 The election of Ebrahim Raisi, already sanctioned by the U.S. in part over his involvement in the mass execution of thousands of political prisoners in 1988, became more of a coronation after his strongest competition found themselves disqualified from running in Saturday's vote.

That sparked calls for a boycott and many apparently did stay home — out of over 59 million eligible voters, only 28.9 million voted. Of those voting, some 3.7 million people either accidentally or intentionally voided their ballots, far beyond the amount seen in previous elections and suggesting some wanted none of the four candidates.

Iranian state television immediately blamed challenges of the coronavirus pandemic and U.S. sanctions for the low participation. But the low turnout and voided ballots suggested a wider unhappiness with the tightly controlled election, as activists criticized Raisi's ascension.

“That Ebrahim Raisi has risen to the presidency instead of being investigated for the crimes against humanity of murder, enforced disappearance and torture is a grim reminder that impunity reigns supreme in Iran," Amnesty International’s Secretary-General Agnes Callamard said.

In official results, Raisi won 17.9 million votes overall, nearly 62% of the total 28.9 million cast. Had the voided ballots gone to a candidate, that person would have come in second. Following Raisi was former hard-line Revolutionary Guard commander Mohsen Rezaei with 3.4 million votes.

Former Central Bank chief Abdolnasser Hemmati, a moderate viewed as a stand-in for outgoing President Hassan Rouhani in the election, came in third with 2.4 million votes. Amirhossein Ghazizadeh Hashemi was last with just under 1 million.

Interior Minister Abdolreza Rahmani Fazli, who gave the results, did not explain the high number of voided ballots. Elections in 2017 and 2012 saw some 1.2 million voided ballots apiece. Iran does not allow international election observers.

While Iran does not have mandatory voting, those casting ballots do receive stamps showing they voted on their birth certificates. Some worry that could affect their ability to apply for jobs and scholarships, or to hold onto their positions in the government or security forces.

Separate congratulations came from Dubai's ruler Sheikh Mohammed bin Rashid Al Maktoum, who also serves as the vice president and prime minister of the hereditarily ruled United Arab Emirates. The UAE has been trying to de-escalate tensions with Iran since a series of attacks on shipping off its coast in 2019 that the U.S. Navy blamed on Iran.

Also congratulating Raisi was Oman, which has served as an interlocutor between Tehran and the West.

Iran's archrival Israel, however, slammed the new leader. Foreign Minister Yair Lapid called Raisi “the butcher of Tehran” and described him as responsible for the deaths of “thousands of Iranians.”

Rouhani, who in 2017 dismissed Raisi as an opponent in his reelection as someone only knowing about “executions and imprisoning” people, met the cleric Saturday and congratulated him.

"I hope I can respond well to the people’s confidence, vote and kindness during my term,” Raisi said.

Since the 1979 Islamic Revolution overthrew the shah, Iran’s theocracy has cited voter turnout as a sign of its legitimacy, beginning with its first referendum that won 98.2% support that simply asked whether or not people wanted an Islamic Republic. Some, including former hard-line President Mahmoud Ahmadinejad, called for a boycott of Saturday's election.

A constitutional panel under Khamenei disqualified reformists and those backing Rouhani, whose administration reached the 2015 nuclear deal with world powers. The accord disintegrated three years later with then-President Donald Trump’s unilateral withdrawal of America from the agreement.

Raisi's election puts hard-liners firmly in control across the government as negotiations in Vienna continue to try to save a tattered deal meant to limit Iran’s nuclear program, at a time when Tehran is enriching uranium at its highest levels ever, though still short of weapons-grade levels. Tensions remain high with both the U.S. and Israel, which is believed to have carried out a series of attacks targeting Iranian nuclear sites as well as assassinating the scientist who created its military atomic program decades earlier.

Raisi also has become the first serving Iranian president sanctioned by the U.S. government even before entering office over his involvement in the 1988 mass executions, as well as his time as the head of Iran’s internationally criticized judiciary — one of the world’s top executioners.

The State Department said it hoped to build on the Vienna talks “regardless of who is in power.” However, it noted the election's lowest-ever turnout and described Iranians as being “denied their right to choose their own leaders in a free and fair electoral process.”

“Iran’s restrictions on free expression and association fundamentally compromise the electoral environment,” the State Department said. “Hundreds of political prisoners remain jailed, and we join the international community in calling for their release.”

But U.S. hopes for a longer and stronger nuclear deal from the Vienna talks may be in question.

“Raisi’s ambivalence about foreign interaction will only worsen the chances that Washington could persuade Tehran to accept further limits on its nuclear program, regional influence, or missile program, at least in Joe Biden’s first term in office,” wrote Henry Rome, an analyst at the Eurasia Group who studies Iran.

Iranian presidents have almost all served two four-year terms. That means Raisi could be at the helm for what could be one of the most crucial moments for the country in decades — the death of the 82-year-old Khamenei. Speculation already has begun that Raisi might be a contender for the position, along with Khamenei’s son, Mojtaba.