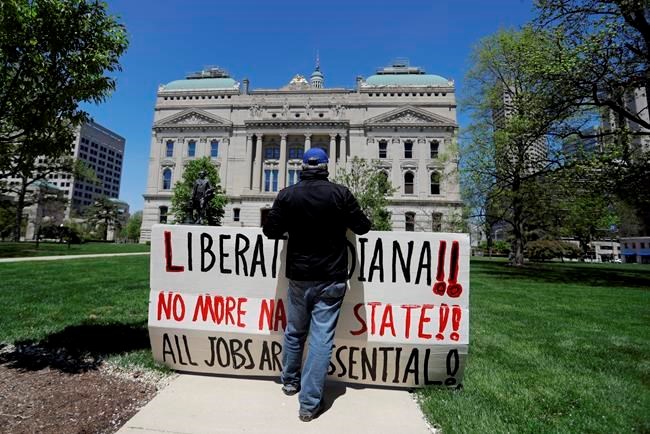 INDIANAPOLIS — Indiana Gov. Eric Holcomb announced Friday the steps toward relaxing business and activity restrictions imposed to slow the coronavirus spread for much of the state, allowing more manufacturers, retailers and shopping malls to open their doors, starting Monday, under health and social distancing guidelines.

The Republican governor’s plan aims to gradually ease rules with the goal of allowing nearly all activities to resume on July 4, potentially opening the way for major summer events such as the rescheduled Indianapolis 500 on Aug. 23.

The new directive lifts travel restrictions under the statewide stay-at-home order that took effect March 25, but doesn’t allow restaurants to resume in-person dining or hair salon reopenings for another week. Fitness , movie , bars and casinos are among businesses that will remain closed until at least late May. A decision on whether schools will reopen in the fall won't be made until later.

Holcomb said he decided to ease restrictions in 89 of the state’s 92 counties because he believes Indiana’s COVID-19 spread has stabilized enough that hospitals are able to care for those who are seriously ill.

“Our effort going forward will be all about managing through this crisis,” Holcomb said. “I’m praying for a vaccine but we gotta do what we can do right now. And we’re taking the responsible steps and allowing folks to responsibly and safely return to some normal aspects of their life.”

The governor’s directive encourages people to wear masks when in public and continue working from home if possible, while also raising the size of allowed gatherings from the current 10 people to 25 people. It removes religious services from gathering sizes limits effective May 8, allowing them to resume in-person observances.

Holcomb said he hoped churches and other religious sites would continue virtual and outdoor services.

“Church leaders, we need you to keep your congregations safe,” he said.

Perhaps 200 protesters gathered Friday afternoon outside the Statehouse as Holcomb prepared to make his announcement. Most were not wearing masks or observing distancing guidelines as they shouted and held signs, with sayings that included “Freedom is essential” and “Liberate Indiana.”

Holcomb’s plan will allow retailers and malls that have been closed as nonessential businesses to reopen Monday at 50% capacity. Restaurants can reopen at half capacity on May 11, with servers and kitchen workers required to wear masks.

Local governments may still impose tougher restrictions to deal with outbreaks in their communities. Holcomb’s new order keeps previous restrictions in place for Marion and Lake counties, which are the state’s largest and lead Indiana in COVID-19 deaths, and Cass County in rural northern Indiana, which had a large outbreak that prompted the closing of a Tyson meatpacking plant last week.

Indianapolis officials have extended the city’s stay-at-home order that keeps many business limits in place through May 15, saying the city was still experiencing too many COVID-19 cases to safely relax restrictions.

“The governor understands the terrible predicament that small business owners are in,” said Barbara Quandt, state director for the National Federation of Independent Business. “They’ve been hit with a double whammy: first they were forced to shut their doors, and then they were given a horrific federal plan that filled them with hopes of recovery but left them with nothing.”

Holcomb highlighted state statistics showing a gradual decline in COVID-19 hospitalizations since April 1 and steady availability of intensive care unit beds in the state for feeling safe to ease restrictions.

Republican legislative leaders credited Holcomb for balancing public health concerns with the need to allow the reopening of businesses. The state Senate's top Democrat, however, said he worried the actions were too soon.

“The key has to be the containment and decrease of the spread of the virus, not just whether we can treat those who continue to fall ill,” said Senate Minority Leader Tim Lanane. “Just because hospitals have the capacity to treat more patients, doesn’t mean the state should be creating them.”

For most people, the new coronavirus causes mild or moderate symptoms that clear up within weeks. For some, especially older adults and those with existing health problems, it can cause more severe illness and be life-threatening.

The governor’s plan projects allowing movie and fitness opening with limited capacities beginning May 24. Bars and nightclubs, along with venues such as museums and water parks, could opening at half capacity in mid-June.

Holcomb said he hopes the state can lift all limits on gathering sizes and business operations on July 4, although warnings for those 65 and older and anyone with high-risk medical conditions would remain in place.

A key part of Holcomb’s plan is a promise of increased testing and tracking outbreaks, including building a team of 500 contact tracers for a state program set to start May 11. The brakes could be put on the relaxed regulations if the state sees a new surge of COVID-19 cases, Holcomb said.

“If people look for openings and shortcuts and believe that this virus won’t affect them like it does other, then we may slip,” he said. “And that will force us as a state to come over top and start suppressing again.”