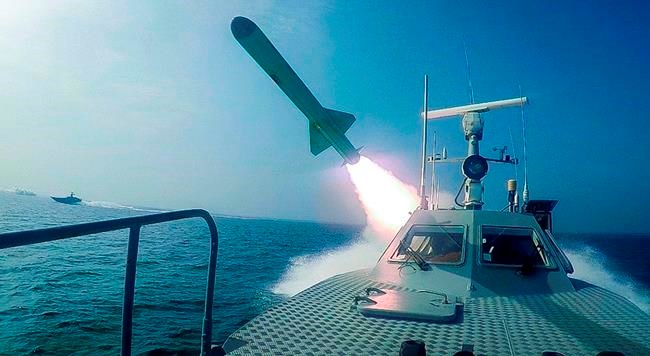 DUBAI, United Arab Emirates — Iran's paramilitary Revolutionary Guard launched missiles Tuesday targeting a mock aircraft carrier in the strategic Strait of Hormuz, a drill that included such a barrage of fire the U.S. military temporarily put two regional bases in the Mideast on alert amid tensions between the two countries.

The drill — and the American response to it — underlined the lingering threat of military conflict between Iran and the U.S. after a series of escalating incidents last year led to an American drone strike killing a top Iranian general in Baghdad. Tehran responded to that strike by firing ballistic missiles that wounded dozens of American forces in Iraq.

While the coronavirus pandemic has engulfed both Iran and the U.S. for months, there has been a growing confrontation as America argues to extend a yearslong U.N. weapons embargo on Tehran that is due to expire in October. A recent incident over Syria involving an American jet fighter approaching an Iranian passenger plane also has renewed tensions.

Iranian commandos fast-roped down from a helicopter onto the replica in the footage aired Tuesday from the exercise called “Great Prophet 14." Anti-aircraft guns opened fire on a target drone near the port city of Bandar Abbas.

State television footage also showed a variety of missiles being fired from fast boats, trucks, mobile launchers and a helicopter, some targeting the fake carrier. A commander said the Guard, a force answerable only to Supreme Leader Ayatollah Ali Khamenei, planned to fire “long-range ballistic missiles” as well during the drill that will continue Wednesday.

Ballistic missile fire detected from the drill resulted in American troops being put on alert at Al-Dhafra Air Base in Abu Dhabi in the United Arab Emirates and Al-Udeid Air Base, the forward headquarters of the U.S. military's Central Command in Qatar, the military said. Troops sought cover during that time.

“The incident lasted for a matter of minutes and an all clear was declared after the threat ... had passed,” said U.S. Army Maj. Beth Riordan, a Central Command spokeswoman.

Both bases are hundreds of (miles) away from where Iran put the replica aircraft carrier.

Al-Dhafra also is temporarily home to five French-built Rafale fighter jets on their way to India for that country's air force.

Other footage from the exercise aired by state television showed fast boats encircling the mock-up, kicking up white waves in their wake. While Iran's naval forces are dwarfed by the U.S. Navy, its commanders practice so-called “swarm” tactics aimed at overwhelming the U.S. carriers that pass through the strait on their way in and out of the Persian Gulf.

It wasn't immediately clear if all the footage was from Tuesday, as one overhead surveillance image that appeared to be shot by a drone bore Monday's date. The exercise had been expected as satellite photos released Monday showed the fake carrier being moved into place by a tugboat.

“Our policies to protect the vital interests of the dear nation of Iran are defensive, in the sense that we will not invade any country from the beginning, but we are completely aggressive in tactics and operations," Gen. Hossein Salami, the head of the Guard, was quoted as saying. “What was shown today at this exercise at the level of aerospace and naval forces was all offensive.”

State TV footage also showed Guard scuba forces underwater, followed by a cutaway to a blast hole just above the waterline on the replica carrier.

That appeared to be a not-so-subtle reminder of U.S. accusations last year that Iran planted limpet mines on passing oil tankers near the strait, which exploded on the vessels in the same area. Iran has repeatedly denied the actions, though footage captured by the American military showed Guard members remove an unexploded mine from one vessel.

The replica used in the drill resembles the Nimitz-class carriers that the U.S. Navy routinely sails into the Persian Gulf from the Strait of Hormuz, the narrow mouth of the waterway through which 20% of all oil traded in the world passes. The USS Nimitz, the namesake of the class, just entered Mideast waters late last week from the Indian Ocean, likely to replace the USS Dwight D. Eisenhower in the Arabian Sea.

It remains unclear when or if the Nimitz will pass through the Strait of Hormuz or not during its time in the Mideast. The USS Abraham Lincoln, deployed last year as tensions initially spiked, spent months in the Arabian Sea before heading through the strait. The Eisenhower came through the strait early last week.

To Iran, which shares the strait with Oman, the American naval presence is akin to Iranian forces sailing into the Gulf of Mexico near the coast of Florida. But the U.S. Navy stresses the strait is an international waterway crucial to global shipping and energy supplies. Even as America now relies less on Mideast oil, a major disruption in the region could see prices rapidly rise.

Cmdr. Rebecca Rebarich, a spokeswoman for the U.S. Navy's Bahrain-based 5th Fleet that patrols the Mideast, said officials were aware of an Iranian exercise she described as "attempting to intimidate and coerce.”

“While we are always watchful of this type of irresponsible and reckless by Iran in the vicinity of busy international waterways, this exercise has not disrupted coalition operations in the area nor had any impacts to the free flow of commerce in the Strait of Hormuz and surrounding waters,” Rebarich said.