CODOGNO, Italy — Italy reported its first death from the new virus from China early Saturday and the number of people infected more than quadrupled due to a cluster of cases that prompted officials to order schools, restaurants and businesses to clos
0
Feb 21, 2020 4:20 PM By: Canadian Press 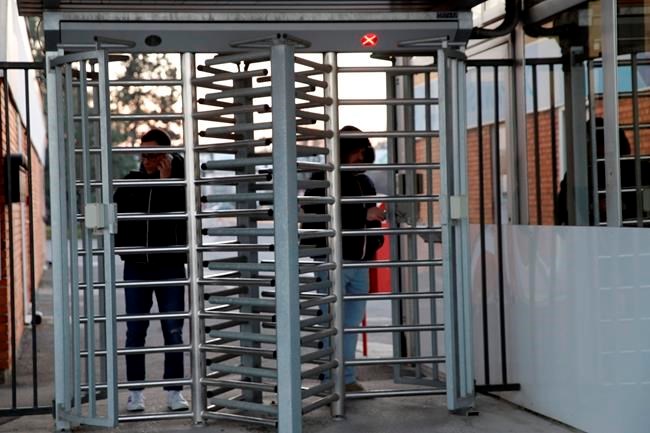 CODOGNO, Italy — Italy reported its first death from the new virus from China early Saturday and the number of people infected more than quadrupled due to a cluster of cases that prompted officials to order schools, restaurants and businesses to close.

In Lombardy, at least 14 new cases were confirmed, representing the first infections in Italy acquired through secondary contagion and bringing the country's total to 19. The cluster was located in a handful of tiny towns southeast of Milan, said Lombardy regional health chief Giulio Gallera.

“This was foreseeable even if we hoped it wouldn’t have happened,” Gallera said.

The first to fall ill was a 38-year-old Italian who met with someone who had returned from China on Jan. 21 without presenting any symptoms of the new virus, health authorities said. That person was being kept in isolation and appears to present antibodies to the virus.

The 38-year-old is now hospitalized in critical condition. His wife and a friend of his, who was a member of his running club, also tested positive for the virus. Three patients at the hospital in Codogno where he went with flu-like symptoms on Feb. 18 also have infections, as do five nurses and doctors.

Tests were under way, meanwhile, on the 38-year-old's doctor, who made a house call on him, as well as on 120 people he worked with in the research and development branch of Unilever in Casalpusterlengo, Gallera said.

Word of the contagion sparked fears throughout the region, particularly given the closure of the emergency room at the Codogno hospital.

“We are old and we are very concerned," said 76-year-old Codogno resident Carmelo Falcone. “I live on my own. I really don’t know what to do.”

The ordinance suspends public gatherings, commercial and business activity, sport, education, and other recreational activities throughout the region, Speranza, the health minister, said.

He defended the precautionary measures Italy took previously, noting that Italy remains the lone European country to have barred flights to and from China, Hong Kong, Macau and Taiwan.

“We had the highest measures in Europe," he said.

The health ministry ordered anyone who came into direct contact with the victims to be quarantined for 14 days. And it recommended others in the region stay home. Italy's civil protection agency, meanwhile, was working to identify military buildings, hotels or other structures that could serve as isolation wards if necessary.

"In other parts of the world, and also in China, it has been demonstrated that this system (of self-isolation) helps in a substantial way to block the spread,” Lombardy regional president Attilio Fontana said. “But we must not let ourselves be overcome by panic."

The Codogno hospital closed its emergency room, and staff were seen wearing masks as movers brought in new beds and furniture as the quarantine got under way.

Rome’s infectious disease hospital is currently caring for three other people who were infected weeks ago, including a Chinese couple from hard-hit Wuhan and an Italian who is now testing “persistently negative” for the virus after two weeks of anti-viral treatment.

Despite the calls for safeguards, Italians were having a hard time finding protective face masks. A sampling of Milan pharmacies reported selling out out weeks ago, as did a pharmacist in Codogno who said Italy had been sending masks to China for weeks.