Migrant arrivals by sea on Italian island swell past 2,100

ROME — Several hundred more migrants reached a tiny Italian island before dawn on Monday, swelling to past 2,100 the number of arrivals in around 24 hours and fueling calls from across the political spectrum for the Italian government to strengthen i
May 10, 2021 12:22 PM By: Canadian Press 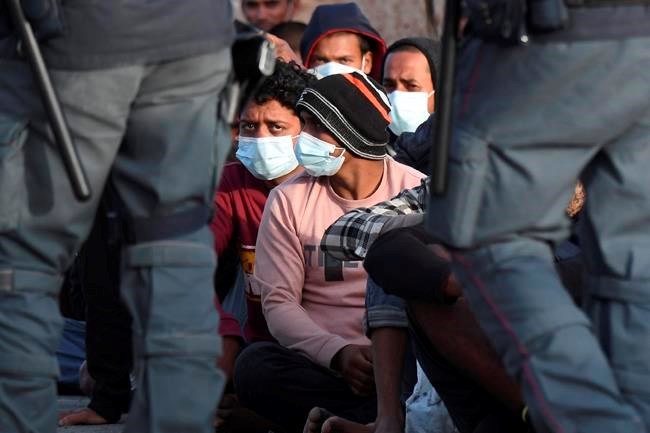 ROME — Several hundred more migrants reached a tiny Italian island before dawn on Monday, swelling to past 2,100 the number of arrivals in around 24 hours and fueling calls from across the political spectrum for the Italian government to strengthen its migration policies.

Human traffickers, mainly based in Libya, but also in Tunisia, often take advantage of calm seas to launch unseaworthy boats toward European shores.

Many migrants slept on the dock after Lampedusa’s migrant housing , which had been empty until Sunday, rapidly surpassed its 200-plus capacity. Hundreds more were being transferred to an unused passenger ferry offshore for quarantine until they can be tested for COVID-19. Another commercial passenger ship was being dispatched to Lampedusa to take on some more.

“The situation on Lampedusa is literally explosive,? said a police union official, Domenico Pianese, in a statement which noted that some 2,150 migrants had stepped ashore on the island since before dawn on Sunday. ”If we have another day like yesterday, with an incessant succession of disembarking, it won’t be possible to manage public and health safety,” he said.

Sunday's steady stream of migrant boats arriving at the (about 8-square mile) island, which is closer to northern Africa than to the Italian mainland, was the biggest number of migrants to come ashore in a single day at an Italian port this year.

This year's arrivals have already topped by far the number of migrants arriving via sea in the same period in each of the past two years. According to Interior Ministry figures, by May 10, 2019, just over 1,000 people had arrived by sea ; by the same date in 2020, 4,184 had arrived, and this year so far nearly 13,000 have arrived.

The numbers, though, are far lower than those earlier in the past decade, when hundreds of thousands of rescued migrants were brought to Italy within the span of a few years.

Il Giornale di Sicilia, a Sicilian daily, said just before midnight Sunday, a boat dispatched by the port captain's office aided a fishing boat with 352 migrants aboard, some 9 nautical miles (16 ) from the island. A few hours later, another coast guard motorboat took aboard 87 men in a boat farther out at sea, while successive hours saw more boats, some of them rusting fishing vessels, reach the island, the newspaper said. Among the latest arrivals were at least 13 women and eight children, the daily said.

Among those arriving on Lampedusa since Sunday were Somali, Eritrean, Sudanese and Bangladeshi migrants, U.N. refugee agency officials said.

The island's mayor, Salvatore Martello, renewed urgent appeals to the Italian government to deal with the sea migrant issue. Lampedusa lives off tourism, and Italy has just launched a national campaign to quickly vaccinate residents of tiny islands against COVID-19 ahead of the looming holiday season.

Political leaders on the left also pressed for effective management of the migrant arrivals.

Democratic Party leader Enrico Letta, a former premier, said there was no choice but to convert a European military mission, now tasked with enforcing an arms blockade against conflict-wracked Libya, into one that can manage rescue operations.

Letta urged the government to press the European Union to make good on pledges to have many of those rescued migrants who land in Italy transferred to other EU nations. "Draghi's the right person, because on a European level he is listened to because he saved the euro (currency),'' Letta said referring to last decade's financial crisis.

In Brussels, the EU’s top migration official, EU Home Affairs Commissioner Ylva Johansson, appealed to member countries to help Italy out by taking in some of the migrants.

“There is a need for solidarity towards Italy and I call on other member states to support with relocation,” she told reporters after talks with the head of the U.N.’s refugee agency. “I know it’s more difficult of course in the pandemic times, but I think it’s possible to manage.”

But past efforts in which some EU nations pledged to take in some of the migrants reaching Italy or Malta saw some countries fail to promises promptly, if at all, Italian officials have lamented.

U.N. High Commissioner for Refugees Filippo Grandi said the EU must come up with a system for coping with migrant arrivals by sea, after years of wrangling over who has responsibility for them.

“Yes, there were several boats coming, but we’re talking about manageable numbers. Through a rational and agreed mechanism, this would be very manageable, in our opinion,” Grandi said.

Many migrants are fleeing poverty in their African or Asian homelands and are eventually denied asylum. With the notable exception of Tunisia, most countries whose migrants are rescued in the central Mediterranean and brought to Italy don't have repatriation agreements with Rome. So many denied asylum never leave Italy.

Among those arriving on Lampedusa since Sunday were Somali, Eritrean, Sudanese and Bangladeshi migrants, U.N. refugee agency officials said.

Last month, a rubber dinghy deflated in the Mediterranean north of Libya, and passengers' phone calls for help, relayed to Libya, Malta and Italy, failed to save them. About 130 migrants were believed to have perished in that shipwreck.