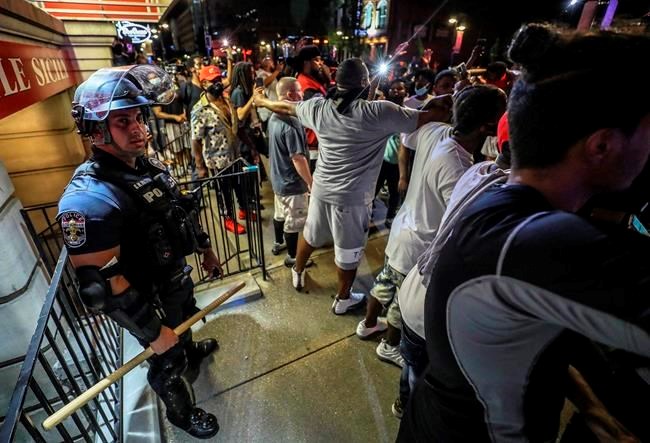 LOUISVILLE, Ky. — Looking to defuse anger after gunfire wounded at least seven people at a protest in Louisville, the mother of a black woman killed by police urged protesters Friday to continue demanding justice but do so “without hurting each other."

With more rallies planned, Taylor's mother joined the chorus of calls for protests to remain peaceful. In her statement, Tamika Palmer said her daughter — an emergency medical technician — devoted her life to others and the “last thing she’d want right now is any more violence."

“Please keep saying her name," her statement said. “Please keep demanding justice and accountability, but let’s do it the right way without hurting each other. We can and we will make some real change here. Now is the time. Let’s make it happen, but safely.”

On Friday evening, what appeared to be several hundred people gathered downtown for the second night of protests. The crowd briefly blocked traffic near City Hall and chanted, “No justice, no peace."

Protesters carried signs calling for justice for Breonna Taylor and George Floyd, the black man who died after a Minneapolis police officer pressed his knee into Floyd's neck for several minutes even after he stopped moving and pleading for air.

A police officer was seen on camera during a WAVE-TV broadcast firing what appeared to be pepper bullets directly at the camera crew.

“I'm getting shot! I'm getting shot!” WAVE-TV reporter Kaitlin Rust is heard yelling off-camera. She told the indignant anchors int he studio that the crew was behind the line, but police wanted them to move further away.

Police spokeswoman Jessie Halladay said no shots had been fired at Friday's protest as of 10:40 p.m. and no significant injuries had been reported. Two people were arrested.

“We value the right to free speech and understand this community has a lot to say right now," Louisville police Lt. Col. LaVita Chavous said. “We hear you."

But she added that police were prepared to “take whatever action we must to try to ensure no one else is injured during this time of unrest. We ask the community to please voice your opinions in a peaceful way.”

Meanwhile, Louisville's mayor said the use of no-knock warrants by police was being suspended, the latest in a series of policy changes and others actions in response to Taylor's death.

“To the people who gathered downtown last night to protest, and to many more throughout our city and throughout our country who feel angry, hurt, afraid, frustrated, tired and sick of story after story of black lives ending at the hands of law enforcement, I hear you," Fischer said.

Two people wounded in the gunfire underwent surgery, while five were in good condition, he said.

Beshear, speaking on CNN, said Thursday’s protest started peacefully but some people later “turned it into something that it should not have been.”

Local Councilwoman Keisha Dorsey termed the protest as “a revolt against a system in which people have felt oppressed," the Courier Journal reported. “What I’m seeing is people who are trying their best to do something with their hurt, their pain and their frustration.”

The Louisville protests followed the release of a 911 call Taylor's boyfriend made on March 13, moments after the 26-year-old EMT was shot eight times by narcotics detectives who knocked down her front door. No drugs were found in the home.

Hundreds of demonstrators marched through downtown Louisville, ending in the early hours of Friday as rain poured down. Windows were broken and several vehicles were damaged during the unrest, police said. Shots were fired into government buildings, including police headquarters, they said. Bricks were thrown into buildings and graffiti was splashed in several places, including a firefighter memorial, they said. The police description of the damage made no reference to any looting.

Jordan Basham, a 24-year-old white bartender, said she was a few feet from where the people were shot. As people fled in terror, a man she didn't know pushed her to the ground, told her not to move and used his own body to shield her, she said Friday.

“I’ll never be able to get that picture out of my mind," she said. “But I am still very glad that I was there. As long as they’re out there protesting, I’ll be back.”

Many protesters wore masks as Kentuckians are strongly urged to follow health guidelines to contain the coronavirus pandemic.

Attention on Taylor's death has intensified since her family sued the police department this month. The case has attracted national headlines alongside the shooting of Ahmaud Arbery in Georgia in February and the recent death of Floyd.