LONDON — Queen Elizabeth II’s birthday was marked Saturday with a smaller ceremony than usual, as the annual Trooping the Color parade was cancelled amid the coronavirus pandemic.
Jun 13, 2020 5:26 AM By: Canadian Press 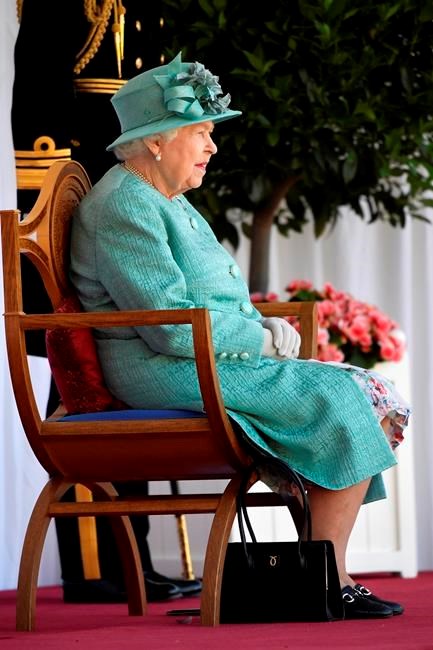 LONDON — Queen Elizabeth II’s birthday was marked Saturday with a smaller ceremony than usual, as the annual Trooping the Color parade was amid the coronavirus pandemic.

The extravagant display of pomp and pageantry, a highlight of the royal calendar that typically attracts thousands of tourists to line the streets of central London, has only been once before during almost 70 years of the queen’s reign — in 1955, during a national rail strike.

This year, a small number of soldiers and military musicians paid tribute to the monarch at Windsor Castle. The queen received a royal salute, before watching a display by soldiers who marched on the castle grounds in accordance with social distancing rules.

It was Elizabeth's first official public appearance since lockdown measures were imposed in March.

The queen celebrated her 94th birthday on April 21, but her “official” birthday has always been marked with the Trooping the Color parade in June. The ‘’ refer to the flags representing the different regiments of the British Army.

The event usually features hundreds of parading soldiers and horses, a carriage procession by the royal family, and a Royal Air Force flypast over Buckingham Palace.

An event like this marking the sovereign’s birthday has not been staged at Windsor since 1895, when a ceremony was held in of Queen Victoria.