This is his quest: An actor serenades the front-line workers

NEW YORK — It’s a stunning sound, emerging amid the clanging and the whooping and the banging and the honking at 7 p.m. each night as New Yorkers cheer front-line workers: the velvety, buttery baritone of Brian Stokes Mitchell.
May 1, 2020 6:05 AM By: Canadian Press 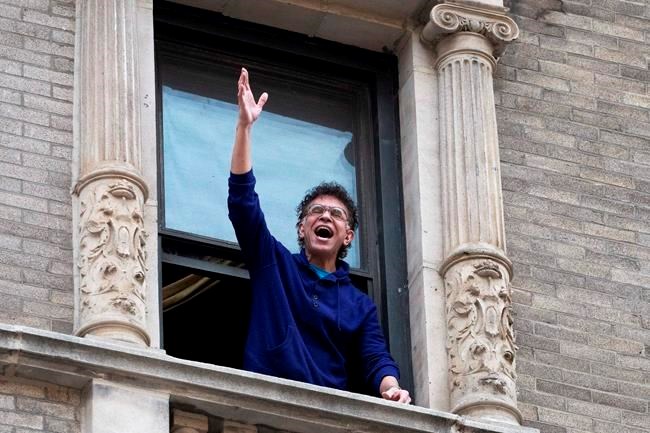 NEW YORK — It’s a stunning sound, emerging amid the clanging and the whooping and the banging and the honking at 7 p.m. each night as New Yorkers cheer front-line workers: the velvety, buttery baritone of Brian Stokes Mitchell.

For decades, Mitchell’s voice has been one of the most celebrated in the Broadway , evoking goosebumps in musicals like “Kiss Me, Kate,” for which he won a Tony, and “Man of La Mancha,” in which he played Don Quixote. Now, with Broadway's houses shuttered due to the coronavirus, the voice rings out from a fifth-floor apartment on the Upper West Side — fittingly on Broadway, a couple miles up from the district.

“This is my quest,” Mitchell sings, leaning precariously out his window, launching directly into the meatiest part of “The Impossible Dream.”

Below, and across the avenue in their apartments, cheer. But Mitchell, 62, is looking to serenade crews of ambulances, fire engines, police cars, or medical workers from the nearby urgent care facility. When they do stop and listen — as a city bus did recently — Mitchell sings directly to them. And when people clap, he sweeps his arms over the workers, as if to say: “Not me. Them.”

Mitchell’s gratitude, expressed nightly the last few weeks, stems from a very personal ordeal. He himself is a survivor of the coronavirus, falling ill in late March. One night, he had a fever nearing 105 degrees, and almost was hospitalized. He's been symptom-free for three weeks.

“I'd been going to the window to applaud for the health care workers like everybody else in New York," he says. “Then one night I spontaneously thought, ‘Oh, I think my lungs feel like I can sing now.’”

And so, he did. He thought it would be a one-night gig. He was mistaken. People kept coming.

“To fight for the right, without question or pause, to be willing to march into hell for a heavenly cause!" Mitchell smiles as he repeats the words, amazed at how appropriate they are for medical workers fighting an "unbeatable foe.”

“People think it’s just called ‘The Impossible Dream,’ but it’s also called ‘The Quest,'" he says. "It's not about DOING the impossible. It’s about trying.”

It is, of course, a terrible time for the community, with arts institutions suffering severe economic loss. Mitchell is chairman of The Actors Fund, which helps performing arts and entertainment professionals. He's donating all profits from his latest album, “Plays With Music,” to the fund.

When the city shut down, Mitchell was working on numerous projects. “Everything was ,” he says. “I have no idea when they'll come back. A year? Six months? Unfortunately I think our sector will be one of the last to come back fully.”

For now, though, Mitchell feels busy with his unpaid gig. “Broadway's closed, but someone's still singing on Broadway!” he quips.

His performance ends with a flourish: “And the world will be better for this, that one man, scorned and covered with scars, still strove, with his last ounce of courage, to reach the unreachable star!”

Mitchell, though, adapts the lyrics to squeeze in words like “one first responder and health-care worker." The audience cheers.

“It's three minutes,” says onlooker Sari Rubin, “of me remembering that there's good in the world.”

While nonstop global news about the effects of the coronavirus has become commonplace, so, too, are the stories about the kindness of strangers and individuals who have sacrificed for others. “One Good Thing” is an Associated Press continuing series reflecting these acts of kindness.