CAIRO — A boat carrying migrants capsized off Libya on Monday, leaving at least two dozen presumed dead, the U.N. refugee agency said. It was the latest disaster in the Mediterranean Sea involving migrants seeking a better life in Europe.
May 10, 2021 11:37 AM By: Canadian Press 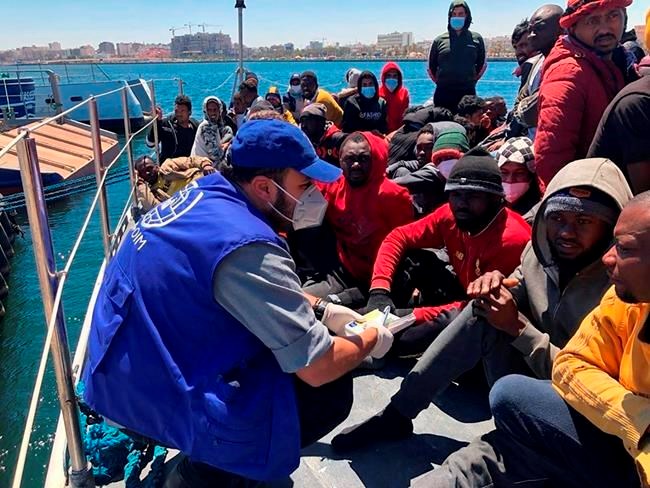 CAIRO — A boat carrying migrants capsized off Libya on Monday, leaving at least two dozen presumed dead, the U.N. refugee agency said. It was the latest disaster in the Mediterranean Sea involving migrants seeking a better life in Europe.

Tarik Argaz, a spokesman for the U.N. refugee agency in the North African country, said the Libyan coast guard returned at least 42 survivors to the shore and the capital, Tripoli. Only one body was retrieved from the sea, and 23 others were feared drowned, he said.

The UNHCR and the International Rescue Committee were treating survivors from burns, he added.

On Sunday, five people, including a woman and a child, drowned when a boat carrying at least 45 Europe-bound migrants capsized off Libya. Safa Msehli, a spokeswoman for the International Organization for Migration, said fishermen rescued 40 migrants from Sunday’s disaster and returned them to the shore.

The boat was among nine that were carrying more than 700 migrants and that were intercepted Sunday by the Libyan coast guard, she said. The migrants were taken to overcrowded detention , where the U.N. migration agency fears more threats to their lives and violations of their rights, Msehli added.

There has been a spike in crossings and attempted crossings from Libya in recent weeks, with smugglers taking advantage of the calm sea and warm weather.

Federico Soda, head of IOM in Libya, said he was extremely concerned about the spike in migrant departure from Libya and the continuous loss of life. “The situation cannot be ignored, and states must live up to their responsibilities and redeploy search and rescue vessels,” he tweeted.

Libya has in recent years emerged as the dominant transit point for migrants fleeing war and poverty in Africa and the Middle East. The oil-rich country plunged into chaos following a NATO-backed uprising that toppled and killed longtime ruler Moammar Gadhafi in 2011.

Earlier this month, at least 11 Europe-bound migrants drowned when a rubber dinghy carrying two dozen people capsized off Libya. That followed another tragedy in April, when at least 130 migrants were presumed dead in one of the deadliest maritime tragedies in years along the busy route.

Around 7,000 Europe-bound migrants were intercepted and returned to Libya so far this year, according to the IOM’s tally.

Smugglers often pack desperate families into ill-equipped rubber boats that stall and founder along the perilous Central Mediterranean route. Over the last several years, hundreds of thousands of migrants have reached Europe either on their own or after being rescued at sea.

Thousands have drowned along the way. Others were intercepted and returned to Libya to be left at the mercy of armed groups or confined in squalid detention that lack adequate food and water, according to rights groups.