University of Michigan officials told of abuse decades ago 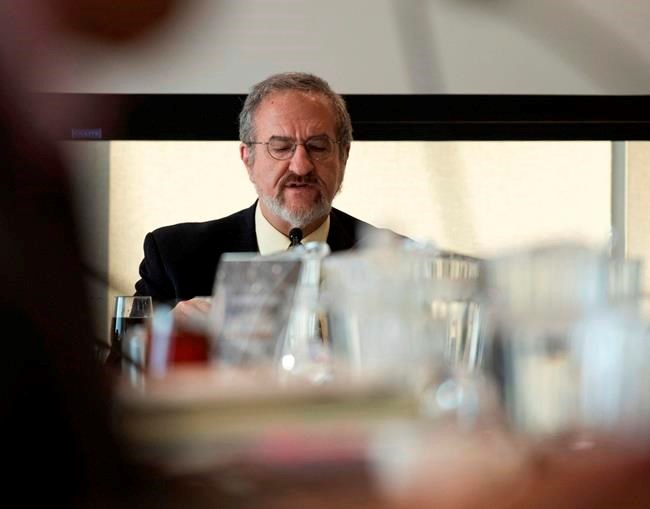 ANN ARBOR, Mich. — University of Michigan officials were warned more than four decades ago that one of its doctors was fondling patients during medical exams, but he continued working there despite a demotion and went on to allegedly abuse again as a physician with the school's athletic department, records obtained Friday by The Associated Press show.

In 1980, the late Dr. Robert E. Anderson was pressed to step down as head of the University Health Service amid such concerns, according to a statement that his former supervisor gave to a campus detective who had started investigating the physician more than a year ago following a complaint from a former university wrestler.

When the detective told Tom Easthope, a former university administrator who oversaw Anderson's department, that he was investigating “inappropriate ” by Anderson, Easthope replied, “I bet there are over 100 people that could be on that list,” according to the records.

Easthope told the detective that he had confronted Anderson about “fooling around in the exam rooms with the boy patients” and told the doctor, “You gotta go." He said the doctor didn't deny the allegations against him. By 1980, at least two students had made complaints to Michigan officials about Anderson inappropriately touching them, according to interviews and records.

When the detective informed Easthope that Anderson had continued working on campus, including with Michigan's football program, up until 2003, Easthope became “visibly shaken” and added that “he was sure that he had left the university.”

On Thursday, Michigan President Mark Schlissel said in prepared remarks at the open of the school’s Board of Regents meeting that its police investigation, launched in 2018, had found “indications” that staff was “aware of and allegations of misconduct.”

A prosecutor concluded that summer that no criminal charges could be authorized because the primary suspect had died and none of the were within Michigan's six-year statute of limitations, Hiller said Thursday.

But the records obtained Friday by the AP add much more detail to what those indications were and show that complaints about Anderson, who died in 2008, spanned much of his tenure at Michigan, up to 2002. More men came forward this week after the investigation became public, including Olympic wrestler Andy Hrovat, who told the AP that Anderson touched him inappropriately during medical exams during his freshman year in 1998.

The revelations echo high-profile sexual abuse allegations made against sports doctors at other universities, including Michigan State and Ohio State.

The records were released by the Washtenaw County Prosecuting Attorney’s Office in response to a Freedom of Information Act request. The prosecutor’s office had reviewed complaints following the university police investigation, which was triggered after a former wrestler in July 2018 sent a four-page letter to current Athletic Director Warde Manuel detailing decades-old abuse.

That wrestler wrote that in 1975, five years before Anderson’s demotion, that he had informed his coach, Bill Johannesen, and the then-athletics director Don Canham that he had been fondled and given unnecessary rectal exams. Athletes on other sports teams had similar experiences with Anderson, the wrestler wrote.

“I am fully aware that it was the 1970s and it was an entirely different world then,” the wrestler wrote in his letter. “I am also aware that 40-plus years is an extremely long time ago. I expect nothing. I want nothing. I just feel the need to report this.”

The student, whose name was redacted in the records released to AP, also recalled Anderson being known as “Dr. Drop your drawers Anderson" by athletes in the 1970s. He accused the doctor of touching his penis and testicles, and inserting his finger into his rectum “too many times for it to have been considered diagnostic or therapeutic for the conditions and injuries that I had.”

The first time this happened was during his freshman year in 1972, when he went to the doctor for treatment for facial cold sores, according to the letter. The wrestler saw the doctor several more times for that condition and was inappropriately touched each time, he wrote.

“I didn’t like it, but I didn’t really pay much attention to it,” the letter said. “He was the doctor and it never occurred to me that he was enjoying what I was not.”

The wrestler said the doctor touched him again during his junior season after he dislocated an elbow.

“I found it strange that I needed a penis and hernia check,” he wrote.

The wrestler told Manuel that athletes on at least two other sports teams knew about Anderson's conduct while he was at the school.

Johannesen, who coached the Michigan wrestling team in the 1970s, told police that, while none of his athletes told him they were violated by a doctor, he did remember them “laughing” and “joking” about one particular doctor who told them to “take your pants down” for a “hurt elbow.” Asked by police to recall the doctor’s name, Johannesen said: “Dr. Anderson.”

Attempts by the AP to reach Johannesen on Friday were not successful.

Another member of the Michigan wrestling team in the 1970s told police that the doctor gave him a rectal exam when he went for treatment of an ankle injury. His name also was redacted from the documents.

The former wrestler told police that he felt abused but that “as an 18-year-old kid, you don’t think to question stuff like that.”

A physician's assistant who worked at the school in the 1970s, Deborah Kowal, told police that Anderson conducted annual physicals of the athletes, including rectal exams. She said she did a couple of rectal exams until then-football coach Bo Schembechler found out. "She said that coach Schembechler did not want a women performing rectal exams on his male players, so Dr. Anderson did the physicals after this," according to the report.

The nearly 100 pages detailing the police investigation also include interviews with people who said they had not heard any complaints about Anderson. Among them was Russell Miller, who was an athletic trainer when Anderson worked with the Michigan football team. He told police that Anderson was an “unbelievable team doctor.”

According to the police report, Miller said when Anderson left his job as director of Health Services, Canham, who died in 2005, worked out a deal so Anderson could work with the football team. Miller said Anderson served as a primary care physician for most of the football staff and their families.

Miller said the thought of Anderson being investigated “shatters him," according to the police report. Jack Harbaugh, who was an assistant football coach at Michigan in the 1970s and is the father of current head coach Jim Harbaugh and Baltimore Ravens head coach John Harbaugh, told police he did not know of anything negative about Anderson. He said he had “great admiration” for him.

Authorities also contacted the state's licensing and regulatory affairs agency and found that it had received a complaint of sexual misconduct against Anderson filed in May 1994. The records don't describe the outcome of the complaint, which was closed within 10 months, and the agency's records on the case were purged seven years later. But an agency official managed to find the name of a man who filed the complaint and provided that to the detective.

When the detective reached out, the complainant said: “I am glad someone finally called to look into this.”

The man, whose name is redacted in the records, told the detective that he was a student at the University of Michigan starting in 1973. Once he went for a routine physical at a campus health , and during that Anderson fondled him to the point of ejaculation. He said Anderson “did not appear to react to this, nor did he say anything,” according to the detective’s summary of the interview.

The man finally filed the complaint decades later because “I couldn’t live with myself,” the detective wrote.

The police report also describes an alleged sexual assault from 2002. A man affiliated with the university said in 2018 that he was sexually assaulted by Anderson while being examined for a brain .

The man said he was told to take off all his clothes and lay down on the exam table. Anderson allegedly started to feel his feet and legs with both hands — in a rubbing, prodding fashion — before moving to his genitals.

"He said that he thought it was totally inappropriate and remembered the way that Dr. Anderson's breathing patterns changed while he was massaging" his genitals, the officer wrote.