US could get stake in airlines in exchange for virus grants

The Trump administration is raising the possibility of the government getting ownership stakes in U.S.
0
Mar 26, 2020 3:53 PM By: Canadian Press 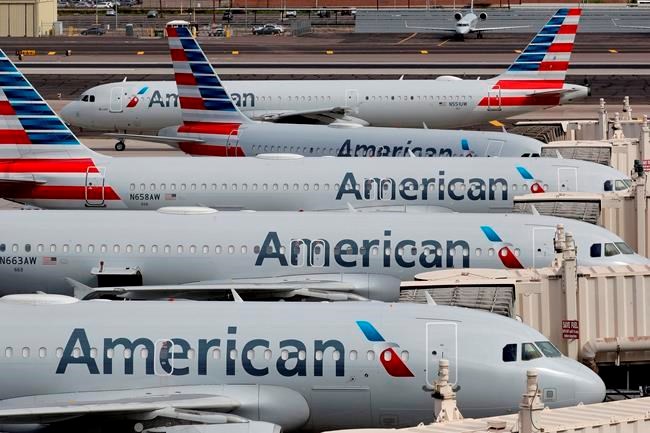 The Trump administration is raising the possibility of the government getting ownership stakes in U.S. airlines in exchange for $25 billion in direct grants to help the carriers survive a downturn caused by the coronavirus pandemic, according to people familiar with the matter.

Details were unclear on Thursday, but one approach being considered by Treasury Secretary Steven Mnuchin is to give the government warrants — options to buy shares in airlines that accept grant money, the people said.

The issue is wrapped up in discussions between the Trump administration and Republicans and Democrats in Congress over a $2 trillion plan designed to soften the economic blow of the COVID-19 outbreak. The Wall Street Journal reported earlier that Mnuchin disclosed the plan for the government to take stakes in airlines during final negotiations over the rescue plan.

Officials from the Treasury Department did not immediately respond to a request for comment.

Aid to airlines is one of the last sticking points in Washington's negotiations over the economic-rescue plan, which includes $500 billion in loans and guarantees to businesses, state and local governments.

The White House and Senate Republicans had only zero-interest loans and loan guarantees to the airlines, while Democrats supported the industry’s request if they were accompanied by conditions such as a ban on stock buybacks and limits on executive compensation.

Some lawmakers questioned the need to give cash from taxpayers to the airlines, which have enjoyed a decade-long run of huge profits and spent much of it buying back their own shares. Buybacks tend to raise stock prices by reducing the number of shares in circulation, which can benefit executives whose compensation is mostly in stock awards and options — not salary.

Airlines for America, an industry trade group, asked for $50 billion in aid to passenger airlines — equally divided between cash grants and loans — and another $8 billion for cargo airlines. When it appeared that the airlines might not get grants needed to make payroll costs -- only loans – the carriers and their unions mounted a furious lobbying effort on Capitol Hill, promising to delay massive layoffs if the government gave the companies an infusion of cash.

The trade group's CEO, Nicholas Calio, praised a long list of officials involved in crafting the relief package, starting with President Donald Trump, and said he hoped the government would release the money quickly and “with as few restrictions as possible.” He didn't mention equity stakes for the government in his statement.

The relief package, which was passed by the Senate and now goes to the House, includes restrictions on other companies that receive aid besides airlines:

—Employment: Companies that receive loans through the $500 billion emergency fund must maintain current employment levels “to the extent practicable” and in any event not to cut more than 10% of their workforce through September.

—Stock buybacks: Companies will be barred from buying back their own shares for at least 12 months after the loan term ends. No dividends on common stock during the same period.

—Executive pay: No increase in compensation for any executive who was paid more than $425,000 last year. For those who made more than $3 million last year, the maximum compensation they could receive is $3 million plus half of any difference over that amount.

—Golden parachutes: Severance for employees who made more than $425,000 last year can't exceed twice their 2019 compensation.

—New watchdog: A new government office and a panel appointed by Congress will monitor how loans and loan guarantees are used, with the goal of preventing abuse.

Airlines were singled out in the rescue package because of the massive blow they have suffered in the face of the global pandemic. Air travel has plummeted due to government restrictions and passengers’ fear of flying. Some flights have fewer than 10 passengers, according to airline officials. The Transportation Security Administration said it screened 239,234 people on Wednesday, compared with nearly 2.3 million on the same Wednesday a year ago – a drop of nearly 90%.

Major cruise lines have also seen revenue and stock prices battered by the outbreak, but a cruise industry official said the bill appears to exclude the industry. The measure limits relief to U.S.-based companies with a majority of their workers based in the U.S. Carnival, Norwegian Cruise Line and Royal Caribbean are all based outside the U.S. The trade group Cruise Lines International Association did not immediately comment.

The bill likewise does not mention Boeing, which had asked for $60 billion in help for itself and other aircraft makers and parts suppliers. However, it includes $17 billion in loans for "businesses critical to maintaining national security,” which lawmakers said was partly to help Boeing. The company declined to comment.

The $2 trillion package has drawn comparisons to the 2008 bailout of banks and automakers during the financial crisis. Critics including some lawmakers were furious when banks and car companies that received help turned around and gave bonuses to executives.

The government gained equity stakes in some companies then. At one point the government owned 61% of General Motors, but it lost $11.3 billion on its $51 billion investment -- more than $60 billion in today's dollars, after considering inflation— when it sold the last shares, according to the Treasury Department.