B.C. man who killed his two young daughters sentenced to life in prison 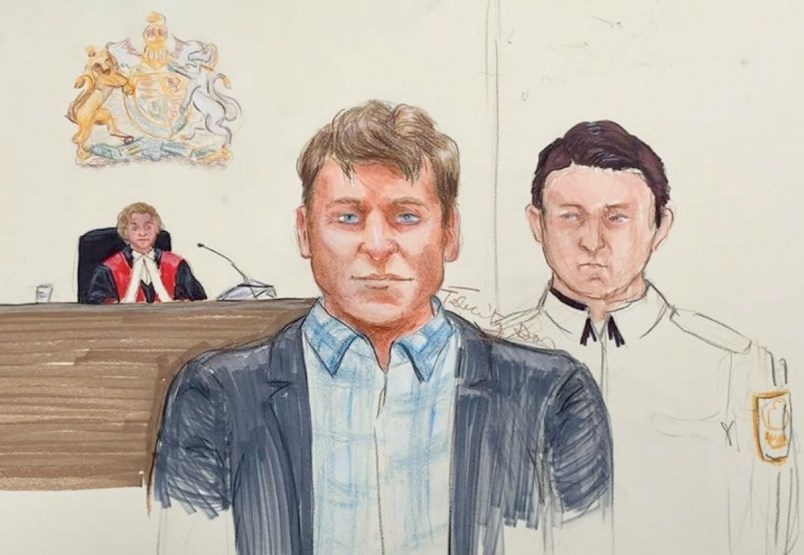 An Oak Bay father who murdered his two young daughters on Christmas morning 2017 has been sentenced to life in prison with no eligibility for parole for 22 years.

On Thursday, at the end of an emotional sentencing hearing, Andrew Berry was led away by sheriffs to begin serving two concurrent life sentences for the second-degree murders of six-year-old Chloe and four-year-old Aubrey.

Some of the first responders who found the girls and saved Berry’s life after a failed suicide attempt sat in the front row of the public gallery, along with the girls’ mother, Sarah Cotton. Detectives from the Vancouver Island Integrated Major Crime Unit, Oak Bay Mayor Kevin Murdoch and Deputy Police Chief Ray Bernoties were also in attendance.

“That he chose to murder his children on Christmas Day turned a joyous holiday into a harrowing one for all the victims,” said Justice Miriam Gropper, who called the murders “heinous.”

“The girls were killed in their own beds, in their own home where they had every expectation that they were safe,” said Gropper. “Chloe and Aubrey were victims in Mr. Berry’s domestic battle with Miss Cotton. The motivation for their murders was to inflict the ultimate pain on her.”

Berry continues to deny that he is responsible for the deaths of the children, said the judge.

Berry has already filed notice of appeal of both his conviction and his sentence.

In a written statement to the media, Cotton asked for privacy and expressed relief that the court process had come to an end. Cotton said both the family law system and the Ministry of Children and Family Development had failed her and her daughters.

“I did everything in my power to keep my children safe. However, my concerns made to MCFD about my children’s well-being in their father’s care and Andrew’s mental health fell on deaf ears,” she wrote.

In giving her reasons for imposing concurrent sentences and the 22-year period of parole ineligibility, Gropper said Berry had harboured resentment toward Cotton since their separation in 2013, believing she had intentionally taken steps to “screw him over” and damage him personally and financially.

Cotton made complaints to the police and the Children’s Ministry, which, although unfounded, prevented Berry from seeing the girls.

Berry complained for years about the girls’ mother and his difficulties with the police and the Children’s Ministry. Even in hospital, in the days after the murders, Berry complained about Cotton to his sister and to a psychiatrist. Berry wanted Cotton and his parents to blame themselves for his suicide and he wanted his sister to blame them, as well, she said.

He was also facing financial ruin. Berry had no money and couldn’t afford to pay his rent. His hydro had been cut off and he knew he wouldn’t get the girls back, after he returned them to their mother on Christmas Day, until it had been reconnected.

At some point before the killings, Berry decided to commit suicide. His suicide note refers to the children carrying on without him, Gropper noted.

“While the sequence of events is known only to Mr. Berry, between 8 a.m. and 9 a.m. on Dec. 25, 2017, Mr. Berry decided against leaving the children behind after he committed suicide,” said Gropper.

Berry struck Chloe on the head with her own small pink baseball bat, fracturing her skull. The blow in itself was enough to cause her death. Both girls had multiple stab wounds.

“It is apparent that his motivation in murdering Chloe and Aubrey was to keep Sarah Cotton from having the girls after his death.”

Gropper found Berry’s lack of a previous criminal record to be a mitigating factor at sentencing. Gropper found the age of the girls and the fact that Berry was their father to be an aggravating factor.

Also aggravating is the fact that Chloe and Aubrey were murdered in their home, killed in the beds where their bodies were found, she said.

“The attacks on the girls was extremely vicious. It amounted to overkill,” said the judge. “Both attacks took some time to carry out and at least one was not spontaneous.”

Berry murdered the children in different bedrooms, which meant he had to move between the two bedrooms, demonstrating forethought and deliberate action, she said.

“I find that Mr. Berry engaged in conduct demonstrating the highest order of moral culpability and dangerousness,” said Gropper.

Outside court, Bernoties thanked the Saanich police officers, RCMP and integrated crime unit members who helped on the case.

“Lastly, we extend our thoughts to Sarah and to all the victims. We at the Oak Bay Police Department have not stopped caring about Sarah and really, I can assure, we never will. We almost see her as one of our extended family now.”

Bernoties told reporters members of the police department “looked after each other” after the traumatic case. “We are a strong but small group and our members are very strong — I’m super-proud of them,” he said. “We’ve obviously called in some professionals for support for our members.”

The murders of Chloe and Aubrey rocked the community, said Bernoties, whose son attended kindergarten with Chloe.

“We’re a small community,” he said, his voice breaking. “We all know each other. We all care for each other and that’s how we get through this ... I don’t want to overstate the impact on the police or the community. There are some specific victims here who will need us to remember them and support them going forward. I don’t want to make this about first responder hardship. This is not what this is about at all. Two precious little innocent girls were taken from our community and we’ll move on together.”

Crown prosecutor Patrick Weir called Berry’s sentence appropriate for the offences and within the range of what he had asked for.

“He is serving a life sentence, so there is no guarantee he will ever get parole,” he said. “But it won’t remove the trauma that has been placed on this community by Mr. Berry’s actions, which will last far longer than the 22 years Mr. Berry will have to wait.”

Weir called the trial a long and difficult process, one he is relieved is over.

“But it was a job that had to be done to the best of our ability and hopefully we’ve done that … . I’m satisfied that he’s being held accountable for his actions.

“I think for the community of Oak Bay and anyone who’s read this story, Christmas Day will always be a little bit different. And for those closest to Chloe and Aubrey it’s going to be very different and sombre for a very long period of time.”

Sarah Cotton, the mother of the two girls, issued this statement:

While I am so relieved that this part of the judicial process is over, there is no length of sentence that is appropriate for the depth of the crimes Andrew committed. Having said this, I support the sentencing decision made by Madam Justice Gropper this morning. Chloe and Aubrey lost their lives in the most brutal way at the hands of their father, I have lost the life that I loved and knew, and I do not believe that Andrew, who has shown no remorse and a complete disregard for the lives of our daughters, should ever get a second chance.

I want to extend my deepest gratitude to Crown Prosecutors Patrick Weir, Clare Jennings and their entire team for their tireless efforts and true professionalism. I could not have asked for a better or stronger team to ensure there is some level of justice for my girls. I am so grateful to all of the witnesses who came forward on behalf the Crown to stand and speak the truth.

I would also like to thank Vancouver Island Integrated Major Crime Unit for their diligence and hard work in seeing this through.

I believe the family law system and the Ministry of Children and Family Development (MCFD) failed us leading up to the girls’ deaths. I did everything in my power to keep my children safe. However my concerns made to MCFD about my children’s wellbeing in their father’s care and Andrew’s mental health fell on deaf ears. Then my concerns that he had a personality disorder were not brought forward in any significant way through the family court process. I can only hope that changes will be made throughout the family law system so that tragedies such as ours do not happen again.

To echo the remarks of Dan Cunningham, whose daughter Charlotte died in September 2015, changes need to be made to legislation governing divorce and separation, mediation, parenting time and access to children. It is an incredibly acrimonious system and one that favours equal parenting time over the safety and wellbeing of the child. We must learn from all of the mistakes in these types of family law cases in order to ensure children are safe, cared for and out of danger.

I want to thank my community of Oak Bay, especially all the first responders for their strength, bravery, courage and sensitivity throughout this horrific tragedy. This community including my neighbours in Oak Bay have held me up and embraced me the last two years — I have felt so protected. And to everyone in Victoria and beyond for their unending support — I am eternally grateful and so blessed to have been touched by so many of you.

I ask for privacy for myself and my loved ones as we move into the holiday season. I hope to find a little bit of peace in the coming year and hope that we can all heal as we move forward.