While the image will remain for now, replacement of the signs is expected to begin in the next month or so
Nov 21, 2020 11:39 AM By: Carla Wilson 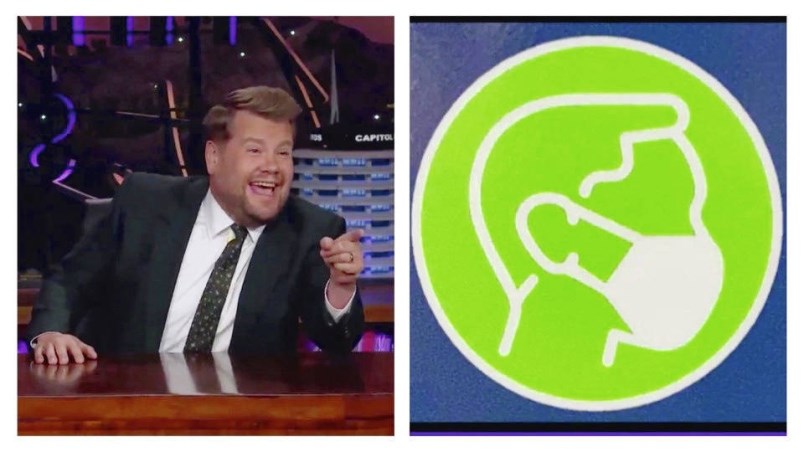 James Corden had a segment on B.C. Ferries' mask sign this week. SCREENSHOTS FROM THE LATE LATE SHOW WITH JAMES CORDEN

A BC Ferries sign reminding passengers to wear a mask has gained far more attention than anticipated, even earning a mention on U.S. late-night television.

The signs show the profile of a man wearing a mask, something that’s been mandatory since August at BC Ferries terminals and onboard vessels.

No one at BC Ferries seemed to notice, however, that the image is reminiscent of a certain part of the male anatomy.

Mark Collins, president and chief executive of BC Ferries, said Friday that it’s a stock image that the company paid for the right to use. “We didn’t see it at first,” he said. “But I do recognize that once you see it, you can’t unsee it.”

Eagle-eyed social media users noticed the image and started joking about it online.

And this week, James Corden, host of the Late Late Show, had some fun as well, saying: “A company in Canada is getting a lot of attention online for its sign encouraging people to wear a mask.”

“Because, well, you’ll see it when you see it.”

To the sound of chuckles, Corden added: “Sorry, I can’t hear. I’ve got a penis in my ear. I mean, talk about ‘graphic design.’ ”

Collins estimates there could thousands of the signs posted throughout BC Ferries’ offices and terminals and on vessels.

“There’s got to be 50 or 60 right in our head office. They are everywhere. It is a measure of how seriously we take masks.”

While the image will remain for now, replacement of the signs is expected to begin in the next month or so.

“It’s not going to be right away — people are having fun with it,” Collins said. “If it draws their attention to the seriousness of wearing a mask and the need to wear a mask, I’m OK with that.”