However, the premier's approval rating has dropped five points since the survey was last conducted.

B.C. Premier John Horgan continues to see the highest approving rating in the country, according to a new poll.

As Canada’s second wave of the coronavirus (COVID-19) continues to challenge Canadians, a new survey finds that Horgan maintains a high level of approval--despite skyrocketing cases of the virus in Metro Vancouver.

The survey, conducted by the Angus Reid Institute, finds that as December 2020 gets underway, nearly-thirds (64 per cent) of respondents approve of the work the B.C. premier has done this quarter.

Notably, however, this figure has dropped by five points since the survey was last conducted. In the summer, Horgan's approval rating was nearly 70 per cent.

Angus Reid report authors note that "Premier John Horgan and his New Democrats gambled with an early election call in October and – amid record low voter turnout – won a majority mandate." They add that the move was seen by many as a "cynical attempt at concentrating power in a time of turmoil."

With this in mind, other people viewed the election as an opportunity to solidify a decision-making authority that comes with a majority government, which eluded the party in 2017.

With infections on the rise, more deaths are recorded daily, restrictions continue to hamper the economy and families are making difficult choices over how they’ll spend the holidays, writes the Angus Reid Institute.

Against this backdrop, the latest data finds Canadians generally continue to hold positive views of their respective premiers’ job performance. But the trend line also indicates the days of provincial leaders appearing incapable of doing wrong politically – as they did in the spring and summer – are long gone.

Despite the new wave of physical-distancing and social restrictions in B.C., Horgan's approval is tied for the highest in the country.

In Quebec, the COVID-19 pandemic has taken more lives and infected more people per capita than anywhere in the country. Despite this, Premier Francois Legault also had an approval rating of nearly two-thirds, or 64 per cent. 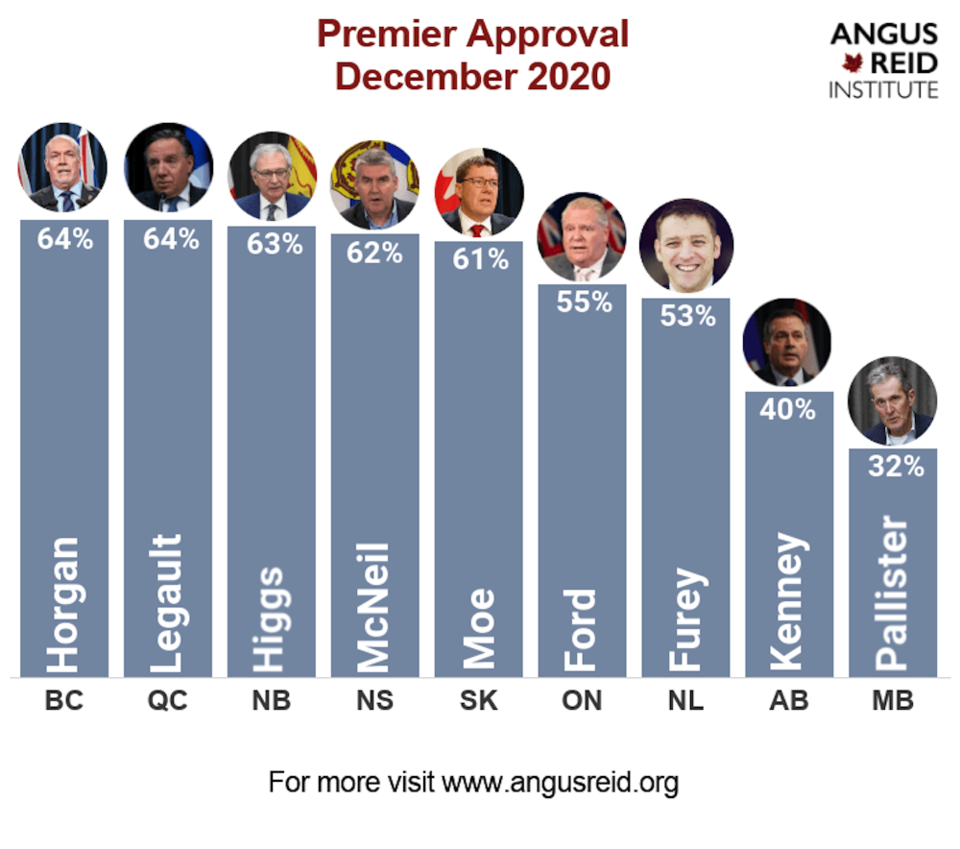 Find out more information about the study here.