Premier Horgan's appeal is the highest in the country

Premier John Horgan's appeal is the highest in the country, according to a new poll.

The survey, conducted by the Angus Reid Institute, finds that the B.C. premier's approval is nearly 70 per cent for the work he has done this quarter.

Despite rising numbers of cases, which reached record levels last week, Horgan’s approval is highest in the country at 69 per cent, suggesting that low (though increasing) hospitalization rates may be calming the public to some extent.

As younger residents drive much of the province’s rising trend in COVID-19 case numbers and tune out public health officials, Horgan recently reached out to B.C-born celebrities Ryan Reynolds and Seth Rogen to help him encourage young people in the province to stop partying during the pandemic.

"This is a call out to Deadpool right now," Horgan said. “Ryan, we need your help out here, get in touch with us.”

Across Canada, Ontario Premier Doug Ford's approval rating is just shy of Horgan's, at 66 per cent. Report authors note that Ford,"has praised residents for their efforts in mitigating the virus. They in turn, are inclined to judge his job performance as praiseworthy."

In Quebec, Francois Legault continues to have the approval of a strong majority (65 per cent), but the report adds that his government’s mandatory mask policy has caused small protests in recent weeks. That said, Quebec’s case numbers - while still highest in the country in total – have remained low for the past two months. Further, the province’s elder care sector is reportedly much better prepared for a second wave of the virus, with new staff being trained and new protocols adopted.

Despite the top three premiers soaring approval ratings, the poll notes that, "all three leaders have faced a mix of praise and criticism for their back-to-school plans, as province’s shift their attention to ensuring the safety of both children and their family and friends when classes resume next week." 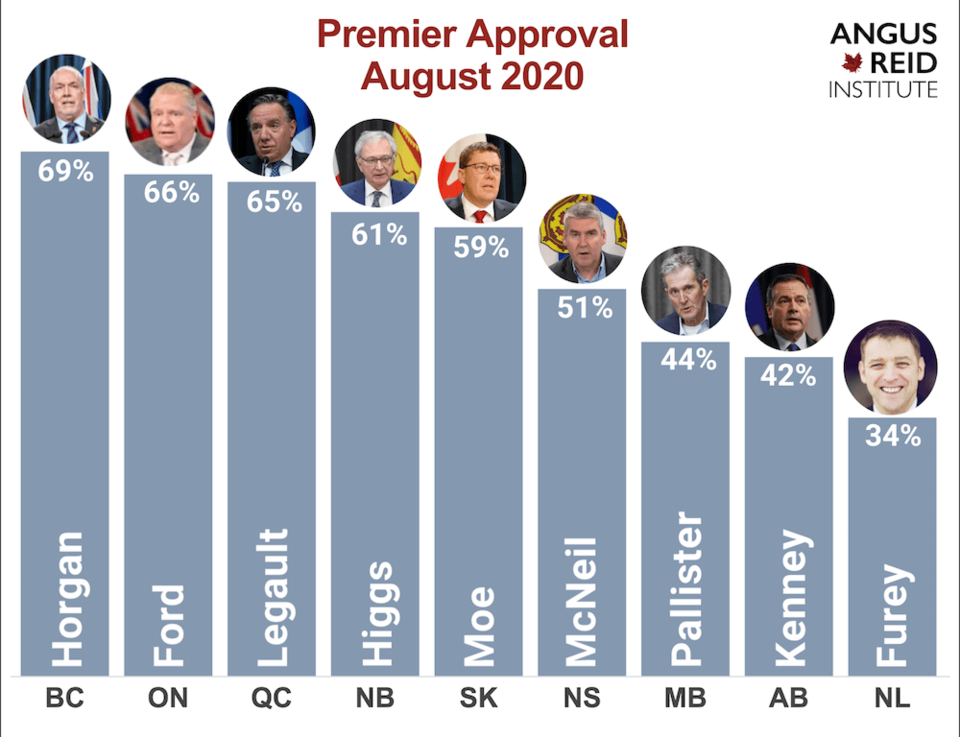 Angus Reid says that each leader's response to the COVID-19 pandemic continues to be a key metric by which Canadians view them. But while the issue consistently supersedes all others in terms of importance, the new data indicates that ratings for Canada’s premiers does not necessarily correlate with the number of cases or severity of outbreak province to province.