Separated by the border closure, B.C. residents are reuniting with their American loved ones at Peace Arch Park

When Zoe Vezina said goodbye to her fiance, Will Terrall earlier this year, she didn’t expect they’d be separated for long.

The couple was living in Australia - since she’s Canadian, from B.C., and he’s American, from Oregon, it was the only real opportunity for them to live together since they started dating two years ago, she explained - when he left to meet up with some friends in Vietnam. She planned to join him a couple of weeks later.

But before Vezina’s departure date, the COVID-19 pandemic struck, borders began closing left and right, and Justin Trudeau made his now-infamous plea to Canadians abroad: “It’s time to come home.”

So instead of hopping aboard a flight to Vietnam, she travelled back to B.C., opting to move into her parents’ suite in her hometown of Nelson rather than return to Vancouver.

By the time her fiance landed back on American soil, the border separating them had been closed to non-essential travel, and the pair had no idea when they’d be able to reunite.

“It was really devastating,” Vezina said. “It was and has been an emotional roller coaster.”

But as it turns out, when B.C.’s provincial parks reopened to the public for day use earlier this month, a loophole for couples like Vezina and Terrall did, too.

Peace Arch Provincial Park in Surrey is unique from B.C.’s other provincial parks in that it’s a shared territory with our southern neighbours, located along the westernmost edge of the world’s longest un-militarized border. Although the southern end of Peace Arch is owned by Washington State Parks and the northern half is governed by British Columbia Provincial Parks, visitors are free to roam within its boundaries, even crossing the physical border that runs through the middle of the park, without having to face either side’s customs or border services agencies. 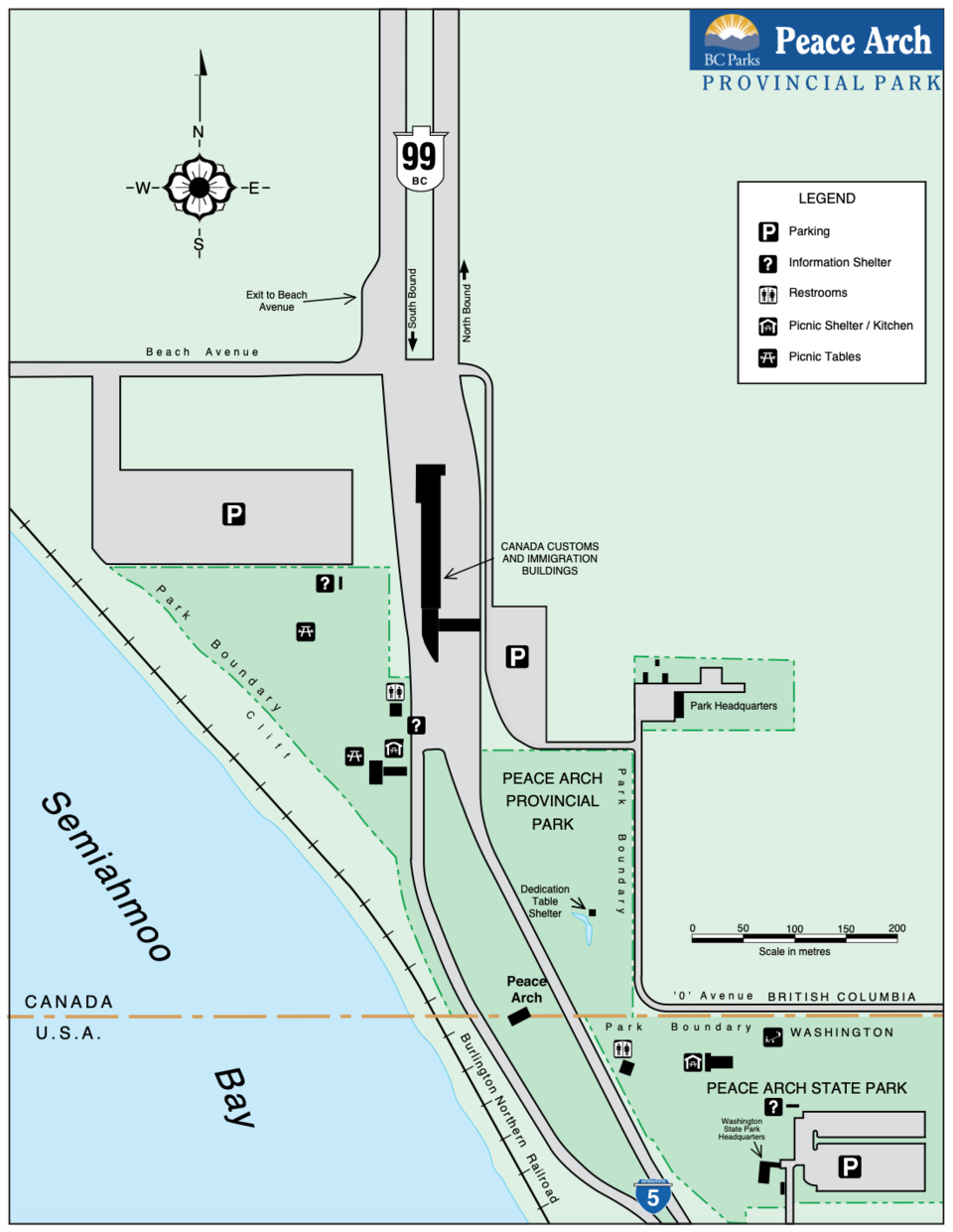 While a handful people who found themselves separated from their loved ones have been getting creative and heading to the Fraser Valley, where parallel roads run on opposite sides of the border, for physically-distanced “border dates,” Peace Arch’s reopening means cross-border couples and families can head to the park to see, hug and hang out with their loved ones in person - without a pesky ditch or loud traffic getting in the way.

TODAY FILLED MY HEART❤️❤️❤️ As some of you know, I’m a 🇨🇦 living stateside🇺🇸, and since the lockdown the border has been closed. These past couple months have been so hard not being able to visit my parents (they would come down and visit or I would go up so often or even be there through the loss of my papa). The last time I got to see them in person was back in February. Recently, both Provincial and Washington State parks were opened up, which meant separated families and loved ones could have a meeting place to reunite and spend time together. I’ve never seen so many people at Peace Arch Park in my life, and it was such a happy moment for everyone! Well worth the 2 hr drive each way! Already planning our next visit and lunch date!

Vezina was researching current border restrictions when she saw another couple separated by the border closure post about the park. “Right away, I was like, ‘This is how I'm going to be able to see him,’” she said. “This is our only chance right now, we have exhausted every other option.”

She booked a flight from Nelson and a hotel room in Surrey, he drove the five hours from Portland, and they reunited for the first time in months.

“It was emotional, but really, really amazing,” she recalled. “Just seeing him walking down the hill and us just walking towards each other, and then we just had a really big hug, I jumped into his arms and had a little cry.”

Best day in a LOOONG time. Wow. Today I reunited with the love of my life, my person, my best friend. We got to lay in the sunshine all day at the Peace Arch International Park, where both Canadians and Americans can enter. We have now been separated for almost 3 months because I am Canadian and he is American • 💟Please help us out today by signing this petition to make family reunification ESSENTIAL. I am not talking about opening the borders and having a free-for-all, I am talking about making EXCEPTIONS for families that have been separated due to the closing of the borders Please sign this petition, it would mean the world to us!👇🏼 • https://www.change.org/p/government-of-canada-canada-allow-family-reunification-during-covid-19 #separation #separatedbytheborder #separatedbyborders #help #separatedbydistance #love #COVID19 #reunited #iloveyou #lovewillwin #petition #signpetition #familyreunification #loveisessential #lovehasnoborders

Despite the long commute for a picnic, “If this park is going to stay open, and if they're not going to change the travel restrictions and loosen them up a little bit for family reunification - which is what we're really hoping for - then I'll probably be down there in another month,” Vezina said.

“It's an expensive trip, but it’s something that for our own mental well being, I think, is just super important.”

Abbotsford resident Samara Stevenson and her boyfriend, Brandon, have also been using Peace Arch as a way of getting around border closures.

The couple met five years ago on an app, while he was living in Colorado. After dating long-distance for a year and a half, Stevenson’s boyfriend moved to Lynden, Wash. to be closer to her. Prior to Peace Arch’s reopening, the couple had been apart since Feb. 29.

When the pair found out about the cross-border park, “We both thought it was too good to be true,” Stevenson recalled.

So far, they’ve visited Peace Arch together twice. “We'll be making it part of our weekend routine until the border reopens,” she wrote in a message, adding, “having this time together is everything.”

Thank you Peace Arch Provincial Park for letting this visit happen finally!! Oh and he needs a haircut...bad.. For anyone with loved ones across the border that they haven't seen in months check this place out! ❤

In the early days of the pandemic, they were one of a handful of couples who started meeting for physically-distanced picnics across the border in the Fraser Valley, but “As the weeks went on I was shocked with how many other families and couples caught on.”

She continued, “I actually got emotional driving down 0 Ave and seeing the families all lined up across from each other, it's heartbreaking! Even though I was able to see him face to face, it put me in such a funk for the rest of the week. When I got into Peace Arch Park I think I nearly tackled him, along with my dog.

“I grabbed his face to make sure it was real.”

While Stevenson said she’s “never resonated so much with the saying ‘so close but so far away’” than during those border picnics, she feels “truly blessed to have even had that opportunity.”

“There's so many couples and families that would give anything for those moments right now. I have a girlfriend who's separated from her partner right now and she's been raising their 11-month-old son on her own, and he'll have to miss his first birthday,” she added.

For both families caught in situations like Stevenson’s friend’s and themselves, Vezina and Terrall hope the Canada-U.S. border can soon begin slowly reopening.

“I'm not saying let's have a free for all and open up the borders so that couples can be reunited and everyone can just start going back and forth,” Vezina said. “Obviously that's not the smartest thing to do.”

Instead, she said she’s hoping North America follows in a few European countries’ footsteps and begins reopening the border in phases, allowing family reunification - with additional measures like temperature checks and mandatory quarantines, if needed - before reopening for tourism.

“Canada talks so much about mental health being a top priority, and this is just so important for mental health - this would be hard even if we weren’t in the middle of a pandemic,” she said. “But we are, and so much is different, and a lot harder and we're not able to be with our partners.”

Thankful to have this wonderful man a part of my life. It’s been 68 days since I last got to be beside you. Never been to Peace Arch Provincial Park before, but like other cross-border relationships, this will probably be our spot until the foreseeable future. #toolongapart #canadaandamerica #peacearchpark #loveyou