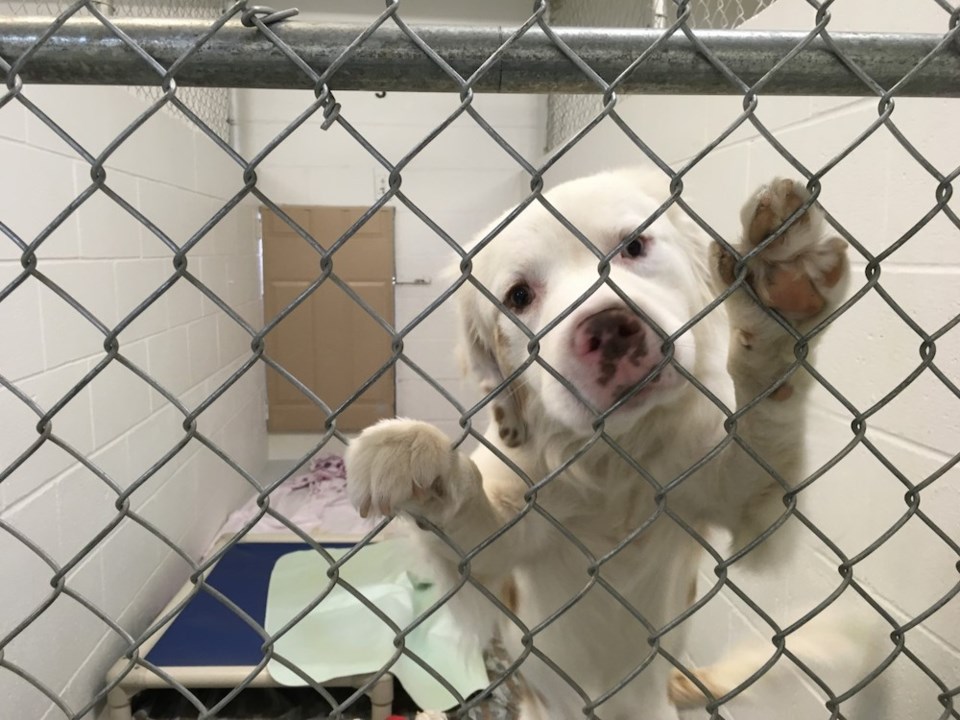 Photo courtesy of BC SPCA

The BC SPCA says medical costs for the 97 neglected animals it seized from a property in Princeton last week could reach more than $100,000.

On Sept. 23, SPCA animal protection officers executed a warrant on the property after receiving a complaint about the animals in distress. The organization says it took 43 puppies, 24 adult and senior dogs, 27 horses and three cats into its care.

"The animals were living in an extremely poor environment, with lack of shelter, unsanitary living conditions, overcrowding, poor ventilation and were exposed to injurious objects,” said Marcie Moriarty, chief prevention and enforcement officer for the BC SPCA at the time.

Now, Moriarty says "most of the puppies" that were seized by the SPCA are suffering from canine parvovirus.

The highly contagious, viral gastrointestinal illness can affect all dogs, but puppies between six weeks and six months old are particularly at risk. Symptoms can include lethargy, vomiting, fever, and diarrhea, and, as a result, severe dehydration. While there are vaccines available to prevent this infection, there are no specific drugs currently available that will kill the potentially-deadly virus in infected dogs, according to the American Veterinary Medical Association. Instead, treatment is intended to support the dog until its immune system can fight off the viral infection.

In a release issued Thursday, Moriarty says 33 of the seized puppies and one adult dog have so far received emergency treatment for parvovirus enteritis. Sadly, eight puppies have already died, despite treatment.

Nineteen puppies and one adult dog are currently hospitalized and receiving treatment, Moriarty adds, while six are stabilized and recovering in shelters. “This is such a heart-breaking situation, particularly because parvo is a preventable disease. These puppies would not be suffering and fighting for their lives had they received proper vaccinations and medical treatment in their owner’s care," Moriarty says.

Now, the BC SPCA is seeking the public's help to help cover the costly medical expenses associated with these treatments.

According to Moriarty, the total costs to care for the rescued animals already amount to thousands of dollars per day and will likely exceed $100,000.

“Anyone who has had a puppy infected with the parvovirus knows how expensive the on-going emergency treatment is and we are dealing with dozens of parvo puppies in addition to the medical and care costs for all of the other puppies, dogs, horses and cats seized from the property," Moriarty says in the release.

“These animals have been through so much and we want to give them every chance to survive and have a safe and wonderful life.”

Anyone interested in contributing to the animals' care can do so here.

COVID-kitties, pandemic-puppies: Uncertain future for pandemic pets in B.C.
May 13, 2020 7:39 PM
Comments
We welcome your feedback and encourage you to share your thoughts. We ask that you be respectful of others and their points of view, refrain from personal attacks and stay on topic. To learn about our commenting policies and how we moderate, please read our Community Guidelines.