"While we knew that this tagline might be viewed as ‘edgy,’ we were confident that it would not be viewed by most people in a negative manner."
Jan 16, 2020 3:02 PM By: Glen Korstrom 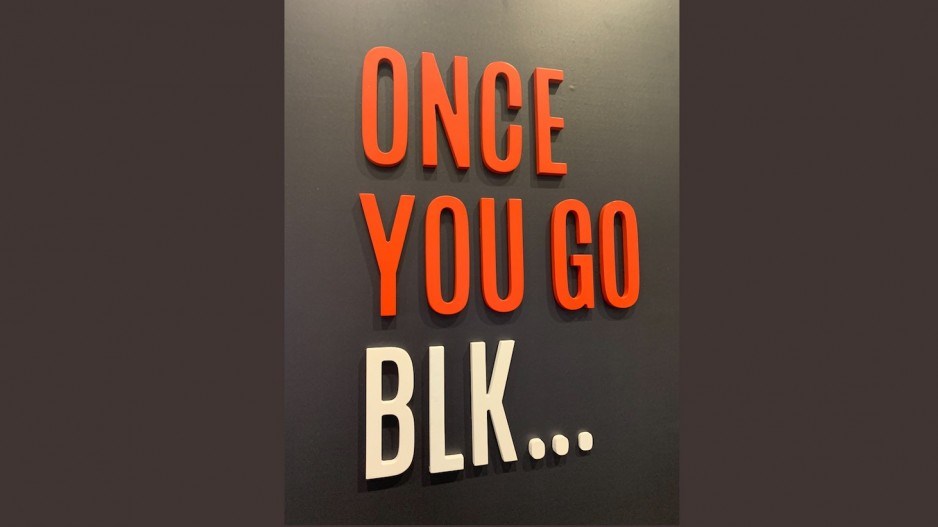 GTEC's tagline for its BLK MKT brand was on display at the Lift & Co. exposition. Photo: @DanaLarsen/Twitter

Why this matters: It highlights how campaigns that companies see as being "edgy" can be misinterpreted and spark a backlash.

GTEC’s campaign included many slogans, but the controversial one was “Once you go BLK.”

Some people on Twitter said they believed that the phrasing drew an allusion to human beings, and not the company's intended double-meaning being to its BLK MKT brand and the longtime underground market for cannabis, known as the black market.

The allusion to people hints at sexuality, and an expression to indicate that once someone gets together with a black person, they will no longer be interested in sexual relations with someone who is from another race.

“While it should be obvious, we would highlight that this brand has absolutely nothing to do with race,” GTEC said in a January 15 press release.

“The phrase was one of several alternative tag lines created by our head of marketing. It is intended to convey the idea that once you try BLK MKT products, you won’t want to consume anything else (i.e. lower quality alternatives).”

Some of the other taglines were: “Flower at its finest,” and “small batch, indoor grown, hand trimmed.”

Cannabis activist and founder of the Vancouver Dispensary Society, Dana Larsen, was one of the people on Twitter who were offended by the BLK MKT slogan and suggested that it related to races of people. 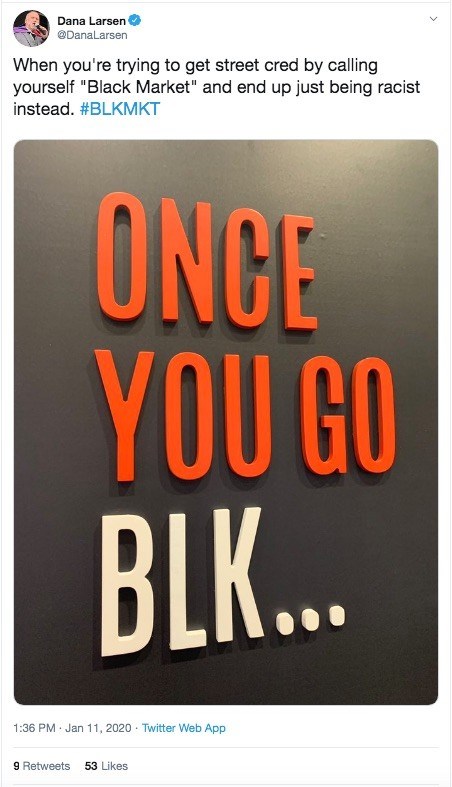 Caption
“When you're trying to get street cred by calling yourself ‘Black Market’ and end up just being racist instead. #BLKMKT,” Larsen tweeted on January 11. He included a photo taken of the slogan at the BLK MKT booth at the Lift & Co exposition at the Vancouver Convention Centre, which was taking place while he tweeted.

Cannabis advocate Jeremy P. Jacob, who described himself on Twitter as a black man released a series of tweets.

Part of his series of tweets said, “Respect is a key part of creating a successful brand, especially in this industry. At this point your respect of black people and sensitivity to our issues seems [break to the next tweet] non-existent. You’re [sic] campaign is insensitive and embarrassing, and as a black business owner, I cannot support your brands.” 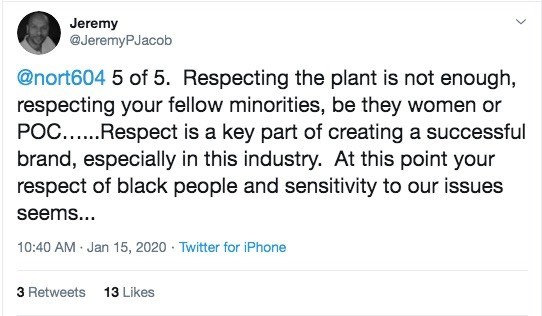 Caption
Groundwork Consulting partner Jamie Shaw was another influential cannabis activist who addressed the controversy. On January 12, she tweeted about how the controversy raised the company’s brand recognition but that it was not in a good way.

“Let’s take a term that didn’t start from racism as our brand and use every opportunity to incorporate racist terms to promote it. Then, when everyone’s talking about all the confusing ways it’s tasteless, we’ll pretend we succeeded in promoting our product, not our tastelessness,” she tweeted.

GTEC said on January 15 that “while we knew that this tagline might be viewed as ‘edgy,’ we were confident that it would not be viewed by most people in a negative manner. Indeed, for the most part, other than a group of individuals on Twitter, it was well received.”

It followed up, however, by saying that the company has no plans to continue using the tagline.

In defending the tagline, GTEC said that the BLK MKT brand was conceptualized and built by three people, two of whom are people of colour.

“The brand was considered relevant, interesting and ‘edgy’ in that it references the legacy cannabis market. When we solicited feedback on this brand concept from our employees, friends, family and industry experts, the feedback was overwhelmingly positive. Moreover, while it should be obvious, we would highlight that this brand has absolutely nothing to do with race.”

GTEC said that of thousands of visitors to its booth at the Lift & Co. exposition, “there was only one instance of a non-POC who felt it wasn’t a proper usage. No other individuals expressed any concern to us.”

“Our CEO is Chinese, our CFO is female, and our head of marketing is of East African descent,” it said in its release. “We also have people of colour working throughout our cultivation facilities, in both entry level and management positions. Moreover, approximately half of our total employees are female. Therefore, it is surprising and ironic that some people have been seeking to characterize our company as ‘nothing but white men.’”

The controversy has not impacted GTEC’s stock price, which is scraping 52-week lows.

That is down considerably from the company’s 52-week high of $0.81.

This Vancouver weed company mistakenly put a bunch of THC into their CBD capsules
Dec 18, 2019 6:48 AM