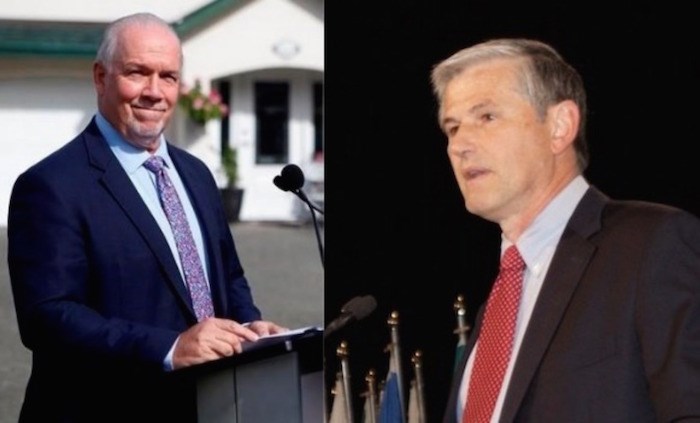 Over the next four weeks, British Columbians will have a chance to reflect on the current state of politics in the province. Research Co. and Glacier Media asked likely voters in the province about their current intentions, as well as their perceptions of the leaders and the issues that are top of mind at this stage.

The incumbent BC New Democratic Party (NDP) starts the campaign with a seven-point lead over the BC Liberals among decided voters (44% to 37%). The BC Green Party is third with 12%, followed by the BC Conservatives with 4%. As expected, the New Democrats are dominating the race in Metro Vancouver (44%) and Vancouver Island (46%).

The BC NDP’s customary ability to connect with female voters remains intact, with women preferring the incumbent party over the BC Liberals by a sizable margin (47% to 35%). The race is decidedly closer among men (41% for the BC NDP and 39% for the BC Liberals).

There is some movement on the approval rating for Premier and BC NDP leader John Horgan. In May, when British Columbia’s handling of the COVID-19 pandemic was the envy of other provinces, 73% of British Columbians were happy with Horgan’s performance. This week, the rating fell to a still impressive 67%. The snap election call has not led to a provincewide revolt against the sitting head of government.

Public support for the BC Liberals increased among decided voters. The main opposition party can point to a stellar showing in their traditional stronghold of southern B.C. (where it leads the BC NDP by six points). The approval rating for BC Liberals leader Andrew Wilkinson fell by nine points to 39%. In the crucial preferred premier question, he trails Horgan by 17 points (44% to 27%).

Gathering positive momentum on the “best premier” question will be essential to turn the fortunes of the BC Liberals around. Right before the start of the 2017 campaign, then-incumbent Premier Christy Clark had a three-point edge over then-opposition leader Horgan (25% to 22%). In this campaign, Horgan starts with a sizable advantage on this indicator.

The situation is extremely complex for Sonia Furstenau and the BC Green Party. Just days removed from her anointment as the full-time successor of Andrew Weaver, she finds herself in the middle of a unique campaign.

At this stage, more than a third of likely voters (37%) approve of Furstenau’s performance, while 27% disapprove and 36% are undecided. These numbers are lower than what Weaver posted in the early stages of the 2017 campaign. The BC Greens continue to connect well with younger voters and Vancouver Islanders (22% among decided voters in each demographic). Still, the biggest challenge for Furstenau is name recognition, especially in a campaign that will not feature as many public events as previous ones.

The BC Conservatives remain a humongous question mark. The party’s website has gone through six and a half months without any updates, and – as was the case the last time – it is too early to know how many candidates the party intends to recruit.

The approval rating for BC Conservative leader Trevor Bolin stands at 23%, and the party’s share of the vote has dropped from 9% in May to 4%. The election call has left riding associations from more established parties scrambling to find candidates and finalize nominations. It is unclear just how successful the BC Conservatives will be in each of these endeavours.

British Columbians cannot agree on a specific issue that will dominate discussions. Health care is in first place (26%), closely followed by housing, poverty and homelessness (24%) and the economy and jobs (21%). In a clear sign of just how much we have become accustomed to the pandemic, only 11% of likely voters volunteered COVID-19 as an answer on this question, down from 21% who took the same action in May.

On the issue landscape, there are some remarkable age discrepancies. Voters 55 and over select health care as their main concern (29%), while those aged 35 to 54 choose the economy and jobs (24%) and those aged 18 to 34 remain troubled by housing, poverty and homelessness (24%). These numbers may shift as the campaign progresses, particularly if some of the minor topics gain prevalence. Crime and public safety, for instance, grew by six points to 8%, as residents of Metro Vancouver have recently endured the effects of gang activity.

Nothing is ever certain four weeks before an election. Each provincial party has different tasks to deal with and a toolbox constrained by the pandemic to establish an emotional connection with voters. We are yet to see debates and plenty of leaflets will be mailed to our homes. We also need to review the effect of local candidates, as several nominations are still being contested. At this stage, the public does not seem particularly upset with the timing of the election, even if the approval rating for the head of government took a bit of a slide.

Results are based on an online study conducted from September 21 to September 23, 2020, among 750 likely voters in British Columbia. The data has been statistically weighted according to Canadian census figures for age, gender and region in British Columbia. The margin of error, which measures sample variability, is plus or minus 3.6 percentage points, 19 times out of 20.