The incident came the same day Burnaby RCMP said it had found a 350% jump in anti-Asian hate crimes last year — one of many jurisdictions dealing with a rise in racism targeting people of Asian descent during the pandemic
Apr 17, 2021 1:48 PM By: Stefan Labbé 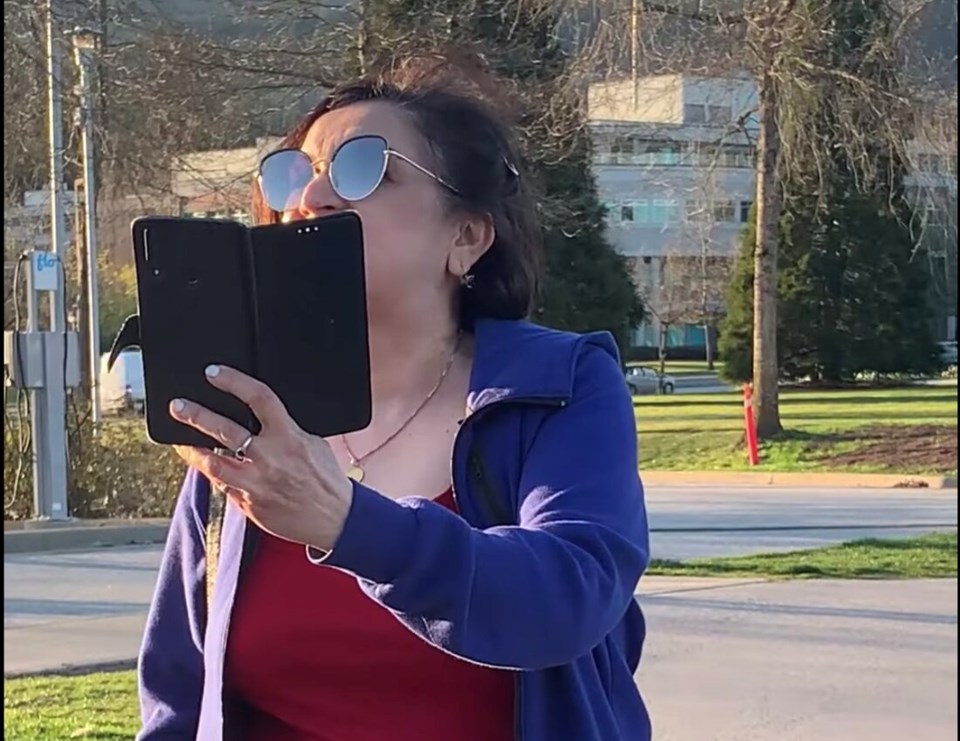 A Port Moody woman is speaking up after what she says was a racist encounter at Coquitlam’s Town Centre Park this week.

According to Gina Chong, the incident occurred when she and her friend were out for an evening walk around Lafarge Lake.

“We were stopped by this lady who asked us to take a photo of her. We said, sorry... we can't due to covid. Then she went on a racist rant saying ‘You know this Covid is all because of you... you need to go back China,’” wrote Chong in a Facebook post.

In an accompanying video, a woman can be heard saying “it came from your country” before levelling an expletive at Chong and her friend.

“I can’t believe this is happening in a city like Coquitlam,” responded Chong in the video.

In her post to Facebook, the Port Moody woman said she and her friend stuck up for themselves but “I wonder how many fellow minorities experience this and just walk away.”

With many bystanders looking on, one lady on a nearby bench defended the two women, saying, “Don't be a racist.... we all bleed the same,” according to Chong.

Chong added she grew up in the Tri-Cities and that she knows “this is not reflective of the beautiful community we live in and a place where I was born and raised,” but that “it’s important to let people know this can happen to anyone” and “there are good people out there who stand up and defend others.”

WARNING: Video contains offensive language that may be upsetting to some viewers.

The same day Chong says she was “racially attacked” in Coquitlam, Burnaby RCMP revealed the city had seen a 350% jump in such offences during the first year of the COVID-19 pandemic, according to a news release Thursday.

In 2019, the detachment responded to six hate crimes with an Asian victim or target — that number jumped to 27 in 2020, police said.

“Throughout the past year, our officers have continued to monitor this increase,” he said. “When notified of a possible hate crime, our officers are instructed to respond and conduct a thorough investigation. Victims of these offences can be reassured that their complaint will be taken seriously.”

In the early days of the pandemic, several police departments across Canada reported a steep rise in anti-Asian hate crimes. But while in neighbouring Vancouver, such crimes were reported to be on the rise as early as April 2020, at the time, Coquitlam RCMP said there hadn’t been any official reports of racist graffiti, violence or threats.

But one Coquitlam councillor warned it could be because people were just keeping quiet about their experiences, and in the months since, several racist encounters and public acts have been called out on social media in the Tri-Cities.

Following the death of George Floyd, rallies held in the same park where Chong was accosted this week called out racism in “every nook and cranny” of the Tri-Cities.

Some local officials were spurred to action last summer, and in Port Coquitlam, an anti-racism committee ballooned in size after overwhelming support from the community. More recently, community groups in Coquitlam and Port Coquitlam received $35,000 to combat racism and discrimination and several other organizations work hard behind the scenes to push back against bigotry.

Still, across Metro Vancouver, assaults on Asian women have continued: within two days in November, one woman of East Asian descent was spit on while walking down the road; another was punched in the head.

Racist incidents have been investigated in Tri-City schools and reported on the region’s hiking trails.

And the rise of such incidents is by no means limited to Metro Vancouver, as recent shootings and targeted beatings in the U.S. have made all too clear.

Even as racist attacks appear to be on the rise, those prepared to speak up are also growing.

Gina Chong’s Facebook post has received over 160 comments, many supporting her, with several others sharing their own experiences with racism.

As one commenter put it: “Anti-Asian racism has always existed in our own cities and I'm glad we are finally bringing it to light.”

In a call with the Tri-City News, Chong said she has received an overwhelming amount of support on social media, both from friends and strangers.

“People are sending me private messages telling me their stories of racism,” she said. “It's such an eye-opener.”

While Chong said she has been subject to racism in the past, she said it had been years since she had such an encounter.

Between the Black Lives Matter movement and the pandemic, Chong said she now feels more empowered to document racism.

“I think as Asians we’re always told to stay silent and not stir the pot. This has to change. I have two young daughters and I want them to defend themselves,” she said.

“People need to start speaking out and telling their stories."

—With files from Cornelia Naylor