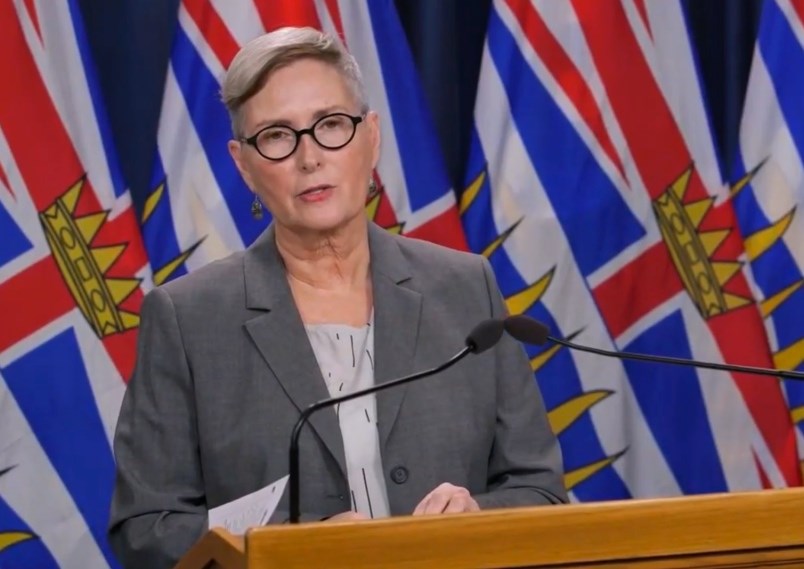 Mary Ellen Turpel-Lafond discusses the findings of a report on racism in B.C.'s health care system on Monday, Nov. 30, 2020.

A report into systemic racism against Indigenous people in B.C.’s health care system found hundreds of examples of racism, prejudice and profiling throughout the entire health system, which results in poorer health outcomes for First Nations and Métis people.

“Indigenous people and health-care workers have spoken clearly — racism is an ugly and undeniable problem in B.C. health care that must be urgently addressed,” said Mary-Ellen Turpel-Lafond, B.C.’s former child and youth watchdog and a retired judge, who released her report Monday.

“Many of the accounts we heard were deeply disturbing, had clearly caused significant harm, and created lasting mistrust and fear of the health-care system,” she said.

Apology "an acknowledgement of the pain": Dix

Health Minister Adrian Dix apologized to all Indigenous people who have experienced racism when accessing health care, acting on one of the report’s 24 recommendations.

“I want to make an unequivocal apology as the minister of health to those who have experienced racism in accessing health care services in British Columbia now and in the past,” Dix said during a press conference Monday morning. “My apology today is an acknowledgement of the pain that Indigenous people have borne from racism.”

While the investigation found no evidence to substantiate the allegations that a Price is Right-style game actually occurred, it did find clear evidence of a more “widespread and insidious problem,” including systemic racism and a lack of cultural safety for Indigenous people seeking health care.

Turpel-Lafond found anecdotal reports that resemble the game allegations but she said “none could be described as prevalent, widespread or targeting only Indigenous patients.” She said, if the game did happen in the past, there’s no evidence it is occurring today.

She said medical professionals sometimes estimate a patient’s blood alcohol level, which is routine and clinically appropriate, and her review did not find that Indigenous patients were profiled based on stereotypes about addictions.

The investigation interviewed 150 “key informants” and surveyed 2,780 Indigenous people and 5,440 non-Indigenous and Indigenous health workers. About 600 people called or emailed the tip line set up to obtain information.

The report included the case of 23-year-old Connor Sutton, a member of the T’Sou-ke Nation and a member of the Canadian Armed Forces who was refused care at the Cowichan District Hospital.

Sutton went to the hospital in June with chest pains, nausea, vomiting, speech difficulties, shortness of breath and disorientation. He was admitted to hospital and doctors determined a hole in his esophagus was causing the chest pains. He was discharged the following morning with antibiotics.

When he began experiencing the same symptoms, along with significant mental distress, he went back to the hospital and begged to be admitted. He said hospital staff refused to admit him and instead told him to find a homeless shelter. Sutton returned later that evening to try again, but a dispute ensued and a security guard restrained Sutton against a wall. He said he hit the security guard in self-defence, which led to the RCMP being called.

His father drove him to Royal Jubilee Hospital in Victoria where he was admitted to the emergency room. Five days later, he transferred from the cardiac unit to the psychiatric ward. His family said they were not given updates on his condition, his medication or reason for being committed to the psychiatric ward. His family pushed for a psychiatric hearing and Sutton was eventually released into the care of the Canadian Forces out of CFB Esquimalt.

The report also detailed a case where a Métis woman was treated so poorly by ambulance and hospital staff, the next two times she needed emergency medical treatment, she drove herself to the hospital.

One elder vividly described feeling the “angry hands” of health care workers over her lifetime, according to the report. Another respondent said: “I am afraid to go to any hospital. When I do have to, I dress up like I’m going to church [in order to receive proper treatment]. It’s ridiculous.”

Another person said: “I avoid the hospital at all costs because as an Indigenous person I feel unsafe and feel like they won’t bother treating me.” The harmful stereotyping included assumptions that Indigenous people are alcholics or drug-seeking, bad parents or unco-operative.

Public health emergencies such as the COVID-19 pandemic and the opioid crisis are magnifying systemic racism and disproportionately impacting Indigenous peoples, Turpel-Lafond said.

The review also analyzed 430 complaints from patient care quality offices, colleges regulating medical professionals and to the First Nations Health Authority. It also looked at 185,000 pieces of data outlining how First Nations and Métis people use the health care system and their health outcomes.

In June, Saanich Peninsula Hospital was identified by CBC News as one of the hospital where the alleged game was played. Turpel-Lafond said Monday while she can’t break down the incidents which happened at each hospital, she said First Nations leaders on W̱SÁNEĆ territory have reported significant change “in terms of the quality of service and the relationship building.” She added there has been “significant work underway over the last number of months” at the Saanich Peninsula Hospital.

Turpel-Lafond said evidence of systemic racism doesn’t mean every Indigenous person who gets health care will experience direct or indirect racism, but they could experience it anywhere in the system.

Healthcare employees not speaking up

She found that racism persists because employees are not willing to speak up and there’s a lack of accountability by leadership to stop discriminatory behaviour. She also found that the current education and training programs for health care staff are inadequate. Turpel-Lafond also said the complaint process for flagging problematic behaviour isn’t working for Indigenous people.

The Ministry of Health will add five new Indigenous liaison positions in each health authority, Dix said. Dawn Thomas, Island Health’s vice-president of Indigenous health and diversity, equity and inclusion, will be seconded as acting deputy health minister and will oversee a task force to implement a comprehensive system-wide reform.

Another recommendation calls on the B.C. government to enhance accountability by creating a process for monitoring reported racist incidents. The government should also work with Indigenous organizations to improve the system’s patient complaint processes to address individual and systemic Indigenous-specific racism. The report also recommends the development of new cultural safety and humility training for B.C. health care workers and the creation of a new school of Indigenous medicine at the University of British Columbia.

Turpel-Lafond said any changes in laws, policies and practices brought in by the government should align with the UN Declaration on the Rights of Indigenous Peoples.

She wants B.C.’s whistleblower legislation, the Public Interest Disclosure Act, to apply to health care workers in order to create a “speak up culture” where people no longer fear speaking out about racism.

“It’s critical that all Indigenous people feel safe when getting health care,” Turpel-Lafond said. “We know that eliminating racism requires humility, anti-racist mindsets and tools, and human rights approaches. And I recognize that we must take steps to foster a speak-up culture where people can raise and address these issues without retribution.”