The frosty season is upon us

Environment Canada calls for a colder, snowier winter this year, but December is expected to be the "oddball" month of the frosty season.

Why is it an "oddball" month?

The federal weather department's meteorologist Armel Castellan tells Vancouver Is Awesome in a phone interview that the start of winter on the west coast will be milder than usual.

But don't plan on rocking a swimsuit at the beach--it's still fairly nippy out there.

And while the Lower Mainland saw a dry, sunny stretch to kick off December, Castellan says more cold weather isn't far off--and plenty of it.

To better understand the long-term frosty forecast, Castellan says Environment Canada's seasonal forecast map shows the level of certainty that winter will be above, below or around average seasonal temperatures.

The drop-down menu also allows you to look at the precipitation forecast, sea surface temperatures, snow to water equivalent and more.

Additionally, output options allow you to select the "skill map" instead of the "forecast map."

Meteorological winter (December, January, and February), kicked off Dec. 1, but doesn't look decidedly frigid on the west coast on the temperature forecast map.

But when the forecast is extended to the two to the four-month option, the cold weather trend is easy to see. 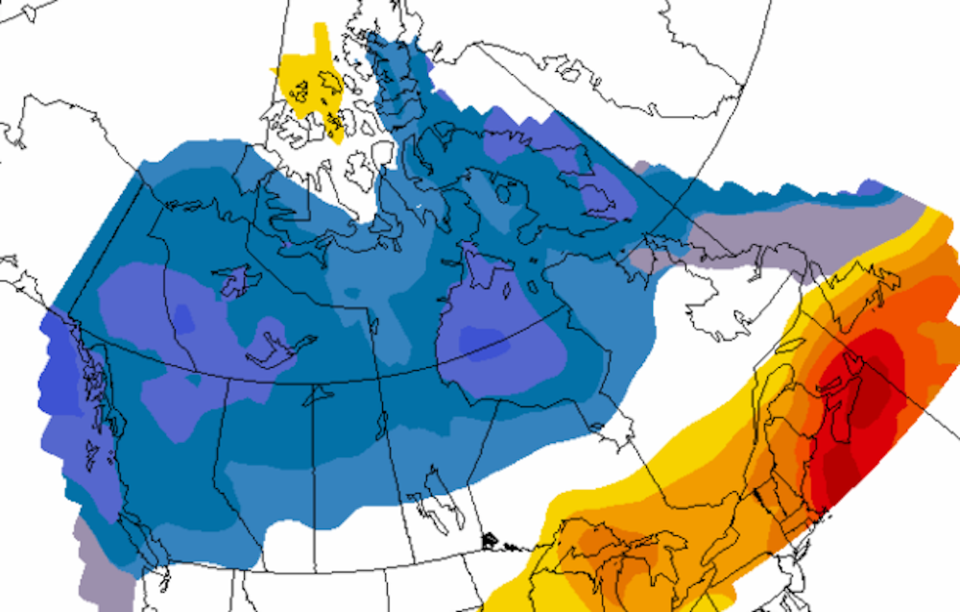 Have a look at the map here.

"This year we have entered into a linear pattern and it's almost 100% going to stick around for December, January, and February--and beyond. It's a moderate to strong La Niña and with that, what we call a teleconnection is when it's going to actually impact us here in B.C.," says Castellan.

While La Niña was identified back in August, it didn't have a significant bearing on local weather at that time. But mid to late December onward, B.C. will likely see colder than normal temperatures, with a much higher level of certainty than Environment Canada will normally give for seasonal projections, Castellan explains. After that, the pattern is expected to continue into spring.

--With a file from Megan Lalonde.