Active children and adults, and people with respiratory disease, such as asthma, should limit prolonged outdoor exertion.
Sep 30, 2020 6:32 PM By: Elana Shepert 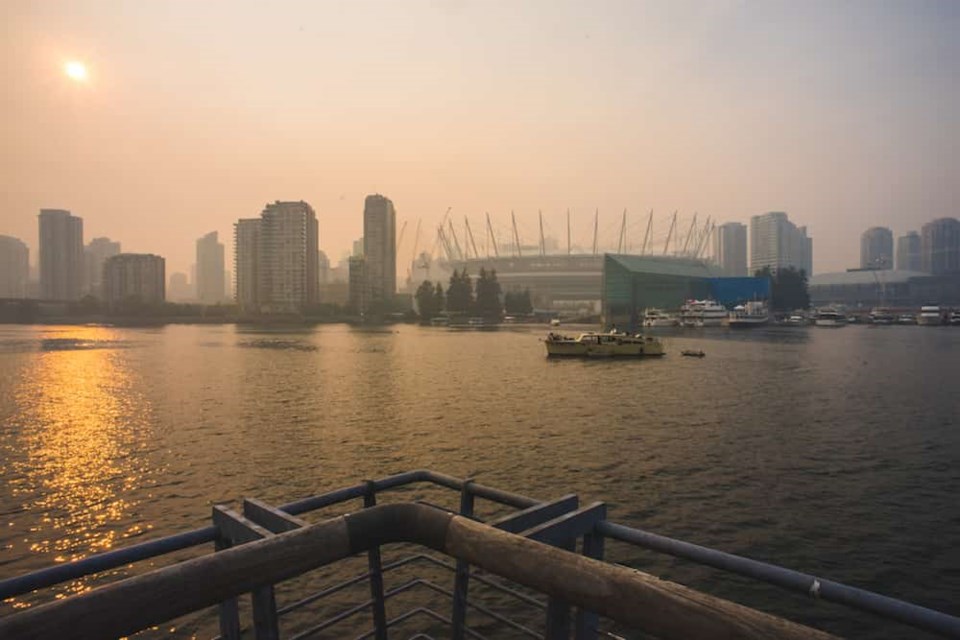 Environment Canada's forecast calls for a week of sunshine and soaring temperatures in the Lower Mainland, but wildfire smoke from south of the border is causing poor air quality in Vancouver.

And while the skies weren't nearly as hazy as they were a couple of weeks ago, locals captured images of the poor air quality early Wednesday morning.

The federal weather forecasting department hasn't issued an air quality advisory, but as of Wednesday, Sept. 30 at noon, the Air Quality Index (AQI) is listed as moderate, which means that the air quality is acceptable, not good. As a result, some pollutants in the air may be a moderate health concern for a very small number of people who are unusually sensitive to air pollution.

Active children and adults, and people with respiratory disease, such as asthma, should limit prolonged outdoor exertion.

Environment Canada meteorologist Doug Lundquist tells Vancouver Is Awesome in a phone interview that the smoke is expected to remain through the weekend. Find out more about the, here.

Have a look at some photos from earlier today.

Wildfire smoke has arrived and is making for a unique glimpse of the sun in the sky. @NEWS1130Weather #newwest pic.twitter.com/VAXL15udch

With the smoke returning to Vancouver today remember to use a filter to keep particulates out of your lungs while cycling. pic.twitter.com/2W72tTcgvH

And once we can see the firery sun rise, we be like “yup, smoke has definitely arrived!” pic.twitter.com/M58ap7jqYo

Patchy fog in low lying areas; haze from CA fires aloft this AM #YVR. The general pattern features high pressure and subsidence thru Fri. Some stratus/fog forms over the Georgia basin Thu AM but mixes out; smoke aloft and Jet stream cirrus Thu will make the day a bit opaque. Mild pic.twitter.com/ldRkhcNaG1

A little smoke back in the Vancouver skies this morning from those U-S wildfires. But relieved to see the blue skies back this afternoon, at least where I am. pic.twitter.com/yr5H9ym1zH

Side by side showing how difficult it can be to determine the extent of #smoke & #haze pre-dawn vs after #sunrise. The veil of smoke is aloft, but it is widespread across the BC South Coast now. So far #AirQuality remains good around Metro #Vancouver. pic.twitter.com/jFvoeWNrwN

Earlier this month, Metro Vancouver continued a fine particulate matter advisory for 10 days for Metro Vancouver and the Fraser Valley Regional District due to wildfire smoke from outside the region.

If you're feeling unwell these days, your first thought might be to get tested for the novel coronavirus. However, wildfires burning south of the border have created poor air quality in the Lower Mainland, which can cause a range of health effects. Find out how to tell the difference between symptoms, here.

Here is how to tell the difference between COVID-19 and wildfire smoke related symptoms
Sep 14, 2020 9:17 PM

Air quality in Vancouver currently equal to smoking over 8 cigarettes a day
Sep 14, 2020 8:50 PM
Comments
We welcome your feedback and encourage you to share your thoughts. We ask that you be respectful of others and their points of view, refrain from personal attacks and stay on topic. To learn about our commenting policies and how we moderate, please read our Community Guidelines.