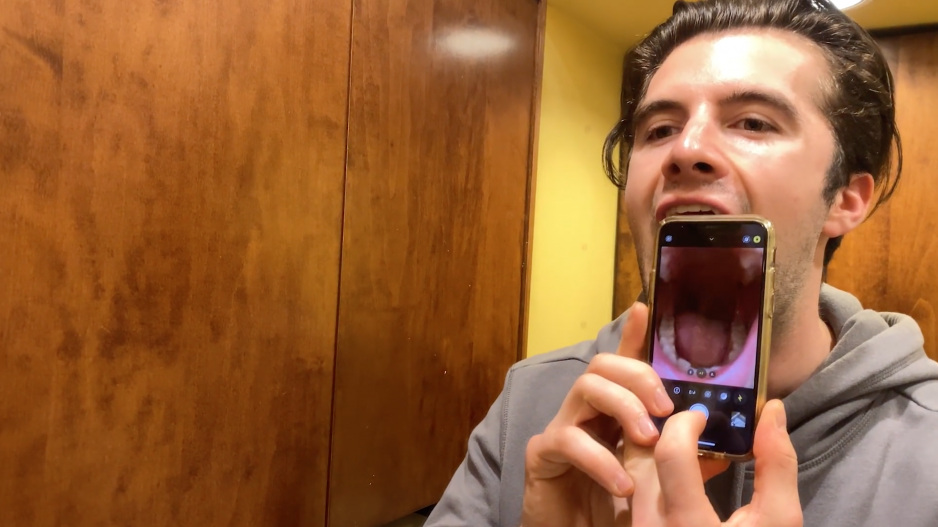 Vancouver-based Light AI testing tech with the Western Hockey League that uses a smartphone camera to determine if someone has signs of being infected with COVID-19.Submitted

Peter Whitehead likes to think most Canadians have the potential to carry a cheap, accurate and rapid COVID-19 testing tool in their own pockets any given moment.

The “gold standard” PCR (polymerase chain reaction) test, as he describes it, can often take days to deliver results and cost upwards of $100.

But the past year for Whitehead has involved developing tech to deliver a result in four seconds using an AI-powered smartphone app to snap pics of users’ inner mouths to determine if the physical effects of COVID-19 are visible on tissue.

“It's amazing how powerful artificial intelligence is,” said the CEO of Vancouver-based Light AI Inc.

“You could have 35 … doctors looking in the back of someone's throat. They wouldn't even come close to make a disease-call like COVID-positive or -negative, and it’s just incredible how AI is able to differentiate.”

Light AI now is embarking on an eight-week study with the Western Hockey League (WHL) that will see how its app stacks up against the PCR tests.

Players on teams including the Vancouver Giants are being tested for COVID-19 once a week as part of the hockey league’s return-to-play protocols.

While WHL players, staff and officials will be relying on the PCR tests for the official green light, they’ll also be using their smartphones to take photos of their mouths that will then processed almost instantly over Light AI’s cloud-based server.

The smartphone results won’t be made available to the users, but Light AI will be able to see how the results compare to the PCR tests as it seeks regulatory approval from Health Canada and the U.S. Food and Drug Administration.

“Our first priority continues to be the health and safety of our players, and everyone associated with the WHL, and we are hopeful this research will improve the technology in our fight to protect our WHL family and communities from COVID-19 and other illnesses,” WHL commissioner Ron Robison said in a statement.

The company got its start developing diagnostic tests for strep throat by examining thousands of images of the physical impacts that bacteria had on the backs of patients’ throats.

Those efforts, which relied on an entirely different device, were waylaid by the pandemic last year before the company could seek regulatory approval.

But by mid-spring 2020, Light AI shifted its focus to seeing whether it could transfer that technology to regular smartphone cameras and then apply its diagnostic capabilities to identifying signs of COVID-19 within a user’s mouth.

It’s since been gathering images from UCLA and Laboratory Corp. of America Holdings (NYSE:LH), more commonly known as Labcorp, to build an enormous database for its AI algorithm to examine the physical effects of COVID-19 on users’ mouths.

“And it's very inexpensive. There's no swabs, there's no lab tests. It's just the cloud and a smartphone,” Whitehead said.

“It makes it a very easy technology to be distributed amongst the population.”

The CEO said the cost of the test hasn’t been locked in ahead of its commercialization but he does not expect it to ring in at more than $5 each. Light AI is also playing around with offering a subscription model whereby customers might, for example, pay $30 for 350 or so tests throughout the year.

Whitehead hopes the tests will be deployed — pending regulatory approval — by early summer.

And with the mass vaccination campaign underway, many more businesses may be poised to benefit from loosened restrictions.

But if there is a stampede of people eager to take flights out of the city, visit offices, attend concerts or go to the movies, Whitehead said an economical rapid test will be in high demand.

“Our fit is to be that triage for everyone’s day-to-day activity,” he said.