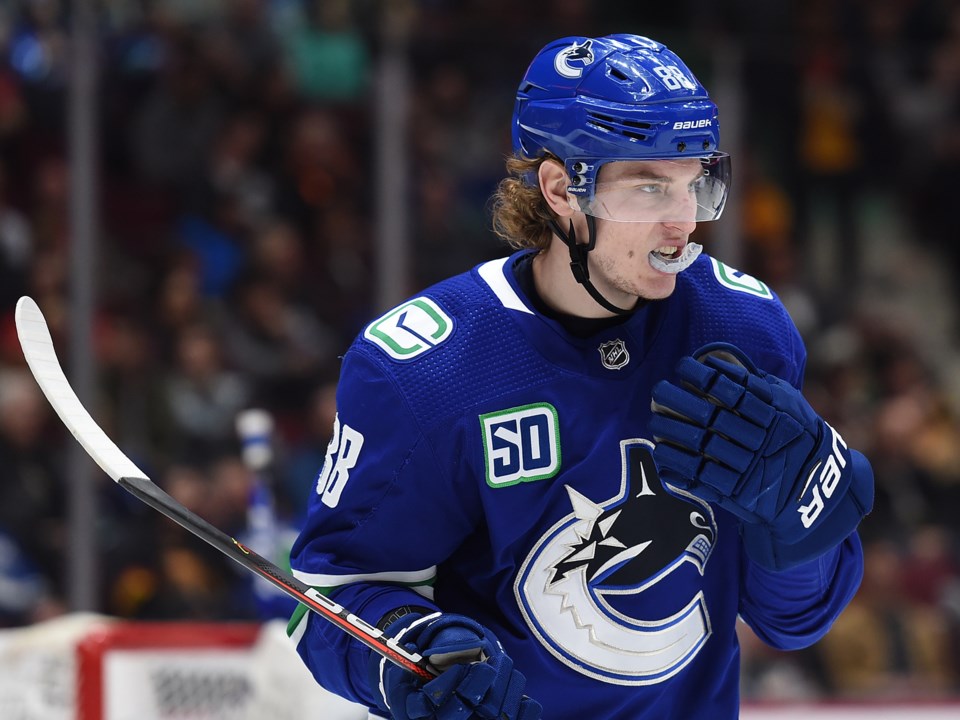 In the middle of Vancouver Canucks practice on Tuesday, Adam Gaudette suddenly left the ice.

A player leaving the ice could be a few different things. He could have an injury, as Elias Pettersson did earlier this season when he left in the middle of practice. This close to the trade deadline, it could also mean the player was traded.

In this current season, there's a third possibility: COVID-19.

B.C. health officials announced 2,518 new coronavirus cases on Monday. Now Gaudette can be added to the new cases for Tuesday.

The question is what does this mean for Gaudette and the rest of the Canucks?

After a positive test, a player receives a second test to confirm the first. If that second test is negative, he'll be tested again. That result will determine Gaudette's status. If he's confirmed positive, Gaudette will need to isolate for at least 10 days according to the NHL’s COVID-19 protocol. If he remains asymptomatic during that time, he could return to the team once he is cleared medically as no longer presenting a risk of infection.

If Gaudette develops symptoms during isolation, then he would potentially need to isolate longer until he goes at least 24 hours without symptoms or has two negative COVID-19 tests.

A 10-day quarantine would cause Gaudette to miss at least five games with the Canucks, but likely more as the team will be in the middle of a road trip when he’s eligible to return.

Are other Canucks at risk?

The next question is if any other Canucks would be considered close contacts for Gaudette or potentially have contracted COVID-19 from him.

Notably, Gaudette and Brock Boeser were hiking together on Monday according to an Instagram story posted by Gaudette’s wife, Micaela Gaudette. Video of the two shows they were not wearing masks but were maintaining physical distance from each other while their dogs played together.

Assuming Boeser and Gaudette only spent time together outdoors and maintained physical distancing, then Boeser shouldn’t be considered a close contact and would have a relatively low risk of contracting the virus. If the two drove together at any point, however, then Boeser might also need to isolate.

In addition, Jake Virtanen missed Tuesday’s practice. According to Green, Virtanen was “not feeling well, so he stayed home.” That said, Green did not report that Virtanen tested positive for COVID-19, so his illness could be unrelated.

Reading between the lines, it’s clear that Gaudette’s positive test was not from Tuesday morning, but from Monday’s test results.

“Our players get tested every day,” said Green, “and obviously we've been tested this morning and we'll see how those test results come back when we get them back.”

In other words, the Canucks have yet to get their results from Tuesday’s tests.

It’s concerning that Gaudette was on the ice with the rest of the team for practice before his results were processed from his morning test. The players receive a PCR test each day rather than a rapid antigen test. While the results take longer to process for the PCR test, it is more reliable in detecting the virus in those without symptoms, which is crucial for preventing the spread of the virus in an NHL environment.

What that means, however, is that all of the players on the ice could have potentially been exposed to COVID-19 from Gaudette.

There is evidence that COVID-19 has been passed from team-to-team during NHL games , so the risk is also there during practice. Players don’t wear masks during practice and are often breathing heavily due to physical exertion. Also, the cold and dry air on the ice means that the virus could be more easily spread than in a warmer environment.

Could Canucks games be postponed?

The Canucks are scheduled to play on Wednesday against the Calgary Flames after a six-day break. With Gaudette’s positive test, that game could be in question.

When the Montreal Canadiens had players go on the COVID-19 protocol list, the NHL was initially intent on them still playing their game that day, but it was eventually postponed, along with three other games.